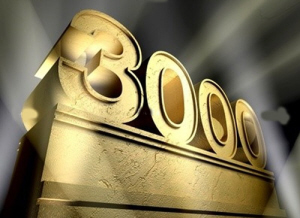 I feel like one of the service staff at a restaurant, waiting excitedly at the entrance for their 10,000th customer. Minus the cool food service uniform.

Ryan Harvey’s article on Edgar Rice Burroughs’ The Oakdale Affair, which went live less than an hour ago, was our 3,000th post. Congratulations to Ryan — and indeed, to the entire Black Gate staff.

The Black Gate blog was the brainchild of Howard Andrew Jones, who suggested I replace the outdated site he and I updated haphazardly with a modern WordPress web publication. I originally said no — and in fact said ‘No” the next half dozen times Howard brought it up. But he eventually talked me into it. Our new look was designed by Leo Grin and our first two posts, in November 2008, were both written by our site engineer David Munger. Our first regular bloggers were David Soyka, Judith Berman, E.E. Knight, Ryan Harvey, James Enge, Scott Oden, and Bill Ward.

Note that I was not a regular blogger. I was not a blogger at all. It took me six months just to figure out how to log in and puzzle out WordPress — and much longer before I dared make my first, timid post. I wrote over 750 in the next four years, and gradually got the hang of it.

We are very proud to be able to bring you, our readers, the best in new and overlooked fantasy every week. The site has grown by leaps and bounds in the last four and a half years, and today a team of nearly 30 bloggers contributes over 20 articles per week. In November 2008 our readership was in the hundreds; this month we are perilously close to breaking 100,000 visits. It’s been an honor and a privilege, and we’re pleased to have you here to celebrate with us.

Honored to have filled the 3000th slot with babble about a murder mystery centered on a bear and cross-dressing!

I’ve picked up quite a few good tidbits from this blog.

> Honored to have filled the 3000th slot with babble about a murder mystery centered on a bear and cross-dressing!

And very special congratulations to you, sir. You — and David Soyka — have been the backbone of the blog since the day we started. According to the Black Gate supercomputer, you’ve single handedly written over 200 blog posts for us. That’s a post a week for 4 years.

Well done, Ryan. And thanks for all your dedication and talent.

> I’ve picked up quite a few good tidbits from this blog.

Me too. I need a bigger house.

Awesome news, and I’m glad I could be a part of it as well!

Glad to have you on board, Scott.

Supercomputer says you’ve got 127 posts to your name… not in the same league as Ryan, but not bad at all considering you started two years later!

Well, Ryan does have a corner office for a reason 🙂

Congratulations, John! Finding this blog/magazine has been a big deal. So much cool stuff/info. Thanks, for all the work of you an all the various bloggers.

Congratulations to the entire staff at Black Gate.

To celebrate the big 3000 I’ve taught the minions how to use the blender so if anyone wants to venture into the basement we’ve fixed that one missing step and replaced the light bulb.

Thanks for all the congratulations!

And Goth Chick — I’m still not going down into the basement until you put a leash on The Thing by the Furnace.

Thanks Paedar! When are you going to write another blog post for us?