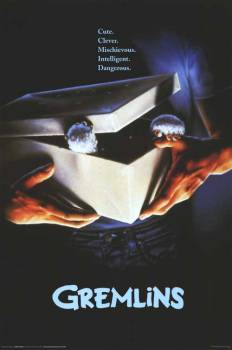 I suppose it was inevitable once we got an updated look at Footloose, Red Dawn, and Fright Night, but fans of the 1984 horror / comedy Gremlins have sprinkled their doorsteps with 30-year-old Gremlins Cereal in hopes the reboot specter will pass them by.

Alas, the sugary goodness seems to have finally lost its magic.

This particular reboot has been a hot topic for multi-generational furry devotees, none of whom want the franchise resurrected, especially if it involves CGI. The original film utilized animatronic puppets bringing the Mogwai and the Gremlins to life. And much like the cereal, it was a tasty experience lacking in any significant (nutritional) value that made the original such a keeper. Why, only a few months back, I witnessed a fan at an entertainment expo about to drop $300 on an original, 80’s plush Gizmo.

Come on, why tamper with that kind of love?

It wasn’t even that long ago that Joe Dante, director of both the original film and the sequel, Gremlins 2: The New Batch, made us believe we were safe for the time being:

I haven’t had any formal talks, or even informal talks, with them about it. It’s a title in their (WB’s) library that sooner or later will be re-exploited. You can’t obviously do a sequel to the second picture because the cast is too old and I don’t know that that’s the way they’re thinking. I think they’d probably reboot the whole thing and start all over or go in a different direction – take the Gremlins someplace else… I do know that there have been attempts at Gremlins pictures. I know that people have gone in with pitches, but nothing has caught their eye. But I’m not positive that it’s entirely Warner Brothers’ decision. Because it’s an Amblin project, it probably has to be signed off on by Spielberg. 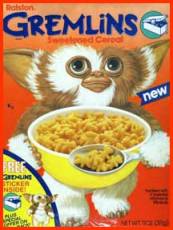 And Mr. Spielberg certainly has more important projects to focus on, right?  Like Jurassic Park 4…

But no, apparently that last part has finally happened and Spielberg has indeed signed off. Add to that the fact that a return appearance by Joe Dante is almost assuredly not in the cards as the term “reboot” has the word “boot” in it, which is exactly what anyone associated with the original work normally gets (unless you’re Spock, of course).

So some time in 2014, probably just in time for a merchandising storm of movie-related holiday happy crap, we’re going to be treated to what will likely be a less-charming more-violent version of Gremlins.

On the bright side, maybe we’ll finally find out what Gremlins Cereal tastes like. Hope it doesn’t taste like Gremlins…

Have a comment?  Well we can’t wait to hear it so post it below or drop a line to sue@blackgate.com.