Hello, fellow connoisseurs of fantasy and horror, and welcome to the first installment of my yet-to-be titled Sunday blog. In a much earlier time of my life (and sometimes it seems like another life altogether), I was a youth pastor with aspirations to be a full-time preacher (for those who know me and are chuckling right now: yes, believe it or not), so perhaps it’s fitting that I’m on Sunday; this is my Sunday sermon.

In coming weeks, I’ll be jawing about everything from obscure fantasy comics (e.g. Arak, Son of Thunder) to the origin of seminal Dungeons and Dragons monsters (rust monster, anyone?) to the latest Hollywood blockbusters. My interests, even when limited to the boundaries of the fantasy genre, are broad.

But for this first installment, I’d like to share the perspective I bring to these topics. I’ll also share — briefly — my credentials, but I’ll keep that short and sweet, because too often that can devolve into sounding like you’re tooting your own horn (as my wife would say), which is why — a little insider fact of the trade here — most authors’ bios are in third person even though they’re usually written by the author.

My tastes always have been rather eclectic, but with fantasy and horror consistently predominant. My imagination is attracted to the peculiar slant, the odd angle, the ghost lurking in the corner of the dusty room. J.R.R. Tolkien and C.S. Lewis were my early masters, and E.A. Poe and E.R. Burroughs. Later, H.P. Lovecraft pulled up a seat at the table, and R.E. Howard and T. Powers (all right, Tim. Enough with the initials!). And many others, from Hayao Miyazaki to Joss Whedon.

I love holidays with all the passion of Chesterton: Christmas and Hallowe’en loom large on the horizon in the cyclical passages of my life. As I grow older — just having tipped over the peak of forty — this potent brew of memory and longing has stirred up quite a bit of nostalgia, which will likely be a consistent leavening influence throughout the column in weeks to come.

At the turn of the century, I re-entered college — a “non-trad” student by then — and earned my B.A. in English and M.A. in English: Literature and Language. Of course, it seemed that a good deal of what fueled my interest in the major would have to be left at the gates of academia, discarded as juvenile or lowbrow. Not so! 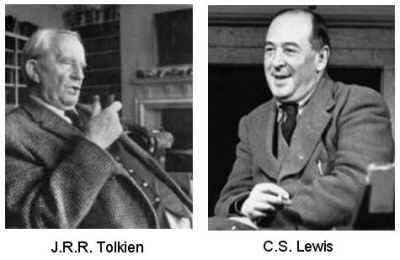 Thankfully, I have been one among a growing movement within higher education that recognizes the literary value of works and authors in genres that were largely ignored during most of the twentieth century. In fact, I wrote my Master’s Thesis on the Inklings — the informal British writers’ group founded by Tolkien and Lewis — and their concept of mythopoeia.

Here is the irony of the Old Guard’s resistance to anything smacking of genre: many of my generation who pursued English degrees did so because Tolkien turned on their love of language, of narrative, of the power of literature — only to be told when they entered that Tolkien was beneath consideration in the halls of academia, and that they must leave such infantile pleasures behind. For the millennial generation, I predict that many will be brought to the humanities by their early love of J.K. Rowling’s Harry Potter books. They will meet with far less resistance, because folks like myself are now filling the ranks of the Old Guard.

I have now taught college literature and composition for about a decade, and it has been my pleasure to teach topics-in-literature courses on Fantasy and Horror, even an Author-Topics course on Neil Gaiman. Yes, the barbarians have infiltrated the college gates, and brought along with them the wizards and the bards. As it should be: after all, Shakespeare was just such a one. As were Homer, the Beowulf and Gawain poets, Mary Shelley, Robert Louis Stevenson, Yeats, and so on. To dismiss post-nineteenth century fantasy out-of-hand is arbitrary and myopic, but I won’t here belabor that point.

I think I’ll have more to say next week on the intersections of critical theory and fantasy in pop culture, but I will leave it there for now. I look forward to being a part of Black Gate online, and I’d like to end by thanking John O’Neill for the invitation. I do believe it’s going to be quite a party.

Also, here at the outset of this new venture, I’d like to thank three people who have been my regular readers for a decade and more: Melissa Ozment, Gabe Dybing, and Frederic S. Durbin. Virtually nothing I write goes out into the world before they’ve seen it first.

Welcome to the crew!

I think you’re right about the changing status of genre fiction in academia. Though there will probably always be some anti-genre snobs on literature faculties, the consensus is shifting as the Gen-X folk start getting tenure.

A thesis on the Inklings sounds as delicious as a thesis can get. What did you say about them?

Thanks, Sarah and Jason!

Re: “A thesis on the Inklings sounds as delicious as a thesis can get. What did you say about them?”

Well, it was the longest thesis ever turned in at Winona State. Before I trimmed about a quarter, it ran to 200 pages–closer to a doctoral dissertation in length. So I said a lot (probably too much). The central focus, though, was on the mythopoeic theory of sub-creation that Tolkien and Lewis developed and elaborated on from the ’30s onward, and how it informed their own fiction (which was seen as quite idiosyncratic and out-of-step with their Modernist contemporaries). Virtually all of the tenets of their theory are encapsulated in Tolkien’s long essay “On Fairy Stories.”

Although they were both extremely influential in other areas, when it came to this particular topic–creating serious fantasy literature–they were largely ignored within their own universities–until, that is, it became one of the most influential genres on popular culture in the late 20th century. Now more and more folks are going back and discovering what they had to say about speculative literature. Tolkien in particular–he is, after all, now widely recognized as one of the masters of secondary-world fantasy. Some of his observations were groundbreaking–his points, for instance, regarding internal consistency (the same point you made on verisimilitude in your last post, come to think of it–to bring it full circle). 🙂