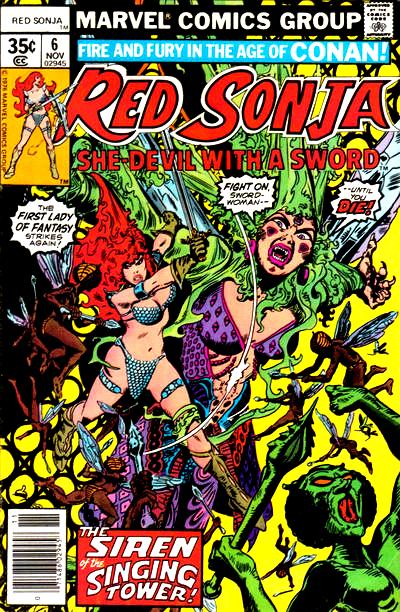 When we last left our heroine, she’d just watched a crazy wizard get killed by a bell. Deciding to get out of the bell tower before anyone started asking her questions, she stole the nearest horse and made her way to the Singing Tower, which was more or less next door to the bell tower. Her traveling companion of the last couple issues, Mikal, is being held prisoner there and if crazy wizards and killer bells are in the tower where they keep guests, who knows what’s in the tower where they keep prisoners.  And we’re off on another psychedelic sword & sorcery adventure.

On page one, we get our first glimpse of the Singing Tower and it is certainly … suggestive. A thick cylinder with a bulbous tip, the tower’s shape is more than a little reminiscent of, oh, let’s say a mushroom. A mushroom surrounded by enticing flowers whose slimy nectar Sonja is compelled to smear across her half-naked body in a state of pure ecstasy. Until she passes out from the sheer pleasure of the act.

Her unconscious body is picked up by a pair of insect people (because, really, why not insect people?) and taken inside the tower. Before they can do much more than lay her out on a stone slab, Sonja’s awake again and drawing a dagger. The insect men vomit silk onto themselves until they’re wrapped in protective cocoons. So far, this is more or less a typical day in the life for the Hyrkanian harridan.

And then she sees a giant woman tied to a wall. Upon closer inspection, it’s obvious that the giantess is tied to the lattice-work of the wall by her own over-grown hair. When Sonja tries to free her from her own hair, she finds that it grows back faster than she can cut it.

Not that she has much of a chance to cut, since a swarm of tiny bee people attack her, stinging her back to unconsciousness, then forcing her mouth open to feed her more of the nectar that had knocked her out earlier. When she wakes up once again, she finds that her hair has begun to grown like the giantess, binding her to the same lattice-work wall.

In walks Mikal. In chains. And a fat ugly guy. Holding the chains. The keeper of the bees.

The keeper of the bees informs Sonja that she is going to be the new queen of the bee people, just as soon as she’s drunk enough nectar to make her grow into a giantess. At which point, the bee people begin to force-feed her more nectar. But Red Sonja doesn’t swallow.

Ahem. Moving forward, Sonja’s hair hasn’t grown nearly as much as the giantess, so she’s still able to cut herself free; but now there’s the question of what to do about the other woman. At which point, the giantess begs Sonja to kill her. Apparently, spending your life tied to a wall and giving birth to thousands of mutant bee larva is exactly as lousy as it sounds.

In a scene reminiscent of “Tower of the Elephant,” Sonja thrusts her dagger through the woman’s heart, which drives all the bee people (her children) insane, setting them to sting one another to death. That leaves only the keeper of the bees. And Mikal. You’d kind of assume that Mikal would use this distraction to free himself and attack his captor; but he’s apparently been knocked out by a blow from the keeper’s mace. So, once again, Sonja’s “companion” is out of the picture, leaving her to do all the fighting herself. In four issues, I can’t recall Mikal helping out in a single fight.So it’s Red Sonja vs. the Keeper of the Bees, her knife against his mace. Well, that’s too easy of a fight, so he knocks that knife out of her hand pretty fast, and then she’s standing there, unarmed. Mikal’s still unconscious. And the only things near her are the two cocooned bee people from earlier in the story.

She picks up one of the cocoons and throws it at the bee keeper, no doubt expecting it to knock him over like a sack of potatoes. Instead, it breaks open, spilling out thousands of maggots that eat him alive. And why did the bee people turn into maggots once inside their cocoons?

My best guess is that it was page sixteen of a seventeen-page story and Roy Thomas just had to get things wrapped up.

Everyone’s dead except for Red Sonja and Mikal. Once the fighting is over, he coincidentally regains consciousness and reveals that the Singing Tower is filled with treasure, sarcophagi loaded with gold. Furthermore, he confirms that he is the rightful ruler of Zotoz. With all the gold lying about, he’ll be able to free his people from the Athosians (from Red Sonja 3). Of course, this suggests that slaying the sorceress-queen of the Athosians three issues back did nothing to free the Zotozians, which means that Sonja has already abandoned them to a life of slavery once.

Still. Mikal offers her the chance to share the throne of Zotoz with him, going so far as to offer her a ring, which she takes, but doesn’t put on. And there’s gold, so much gold just sitting there.

But Red Sonja turns him down and walks out of the Singing Tower without taking so much as a bauble. With a casual flick of the wrist, she tosses the ring into a lake and walks off into the next issue.

This isn’t the first time that Red Sonja has turned down a throne. It’s not even the first time that she’s turned down the throne of Zotoz. And we see once again that the She-Devil with a Sword is not interested in power so much as adventure. Crazy, incoherent adventure. A throne room would be no more than a gilded prison to our heroine. Walking unarmed into the mysterious horizon, casually tossing aside the promise of power and wealth for all the rest of her days, we see Red Sonja in her purest form.

Of course, there’s the fact that the Zotozians were morons who knowingly sent their best potential warriors to their deaths in a pointless series of competitions. And Mikal is kind of a pansy. And it is implied that the “gold” is actually dried bee-people mucus. So maybe she’s just waiting for a better offer.

Roy Thomas wrote that? His contemporaneous Conan comic yarns seem staid and sedate (or at least grounded and coherent) compared to this parade of random hallucinations.

These reviews are even more entertaining than the comics. Certainly they’re more lucid, anyway!