Rotten Tomatoes recently published its list of the 50 Best-Reviewed Fantasy Fims of all time. Such lists are by their subjective natures both entertaining and infuriating, designed perhaps to produce reactions ranging from nostalgic admiration to sputtering, slack-jawed amazement, and opening debate as to whether not only a particular film should have been selected, but also whether whole categories of films should have been selected.

What counts as a fantasy film? RT’s list, for example, is dominated by decades of Disney and Pixar films, from classics such as Snow White and the Seven Dwarves (#3 on the list) and Pinocchio (#2) to the Shrek franchise, not to mention all five of the Mayazaki releases. Sure, somebody casts a magic spell in each one of them, but are these fantasy movies or kid’s movies? If a bit of magic is all you need to qualify as a fantasy film, where are all the movies featuring Santa Claus? Why is Mary Poppins not on the list?

Few viewers loved The Princess Bride (#15) more than I, and while Miracle Max could not have brought Wesley back to life without a magic pill, is it a fantasy or a comedy? If it isn’t a comedy, Monty Python and The Holy Grail (#7) surely must be. And if comedies involving any sort of magic count as fantasy movies, why aren’t Groundhog Day and Splash on the list? What about Ghostbusters, featuring not only a panoply of ghosts, but also a Mesopotamian demigod with the power to create a giant marshmallow man?

Does Stephen King’s Carrie become science fiction if we distinguish her magical ability with the scientific moniker of psychokinesis? Since the gentle giant in The Green Mile has no name for his magical healing ability, does that film qualify?

Does tracing superhuman ability to a radioactive arachnid classify Spider-man as science fiction? Does the fact that we attribute the abilities of the X-Men to genetic evolution, without any actual scientific basis, similarly slide those films into the science-fiction category?

Similar lists have abandoned all pretense of trying to limit themselves to true fantasy films (check out the list by IMBD, for example, which includes obvious science fiction films such as V For Vendetta, Star Wars, and Avatar).

The problem may be that the list of truly good films that unequivocally qualify as fantasy is not very long. Cut the animated films and the Harry Potter franchise and RT loses about half its roster.

Even though Hollywood was able to generate sufficient special effects long before CGI to make fine fantasy films – The Wizard of Oz, Jason and the Argonauts – finding an even watchable fantasy film can be a daunting task. From Krull to Willow to The Golden Compass to Wrath of the Titans, the list of worst fantasy films seems easier to generate, though less susceptible to debate.

Irrespective of categorization, the RT list was baffling at best. Does anyone seriously believe that Hellboy II (#37) was better than the original (#50)? Why is The Adventures of Baron von Munchausen (#31) on anyone’s list of best films of any category?

If you were trapped on a deserted island with a DVD player and an endless supply of batteries, would you really rather bring Fantasia (#5) than Pan’s Labyrinth (#12) or Time Bandits (#18)?

Using my own subjective viewpoint as a universally accepted baseline (though this admittedly requires the universe to accede to exclusion of films I have not seen), the following are the ten best fantasy films (i.e., films that smell like fantasies more than comedies, family films, Christmas or horror movies, etc.) of all time, (arbitrarily limiting franchises to one entry each):

#10: Jumanji – Robin Williams is excellent as man who has been trapped in a board game for most of his life.

#9: The Green Mile – Tom Hanks and David Morse are prison guards responsible for the fate of Michael Clarke Duncan, a man with miraculous healing powers accused of horrific crimes. Sort of a junior Shawshank, which is good enough for me.

#8: Pan’s Labyrinth – a visually rich, haunting, and moving film about the fate of a young girl caught in Nazi occupied Spain.

#7: Ladyhawke — Rutger Hauer and Michelle Pfieffer are cursed lovers and Matthew Broderick is the young thief who may set them free. A thoroughly satisfying movie.

#6: Harry Potter and the Prisoner of Azkaban – While I found Michael Gambon wanting after Richard Harris’s portrayal of Dumbledore, this was the most emotionally powerful film (and book) in the series.

#5: Splash – borderline as to qualification criteria, since this smells almost as much like a comedy as a fantasy. Tom Hanks, Eugene Levy, and John Candy are hilarious, but Darryl Hannah is pure magic. 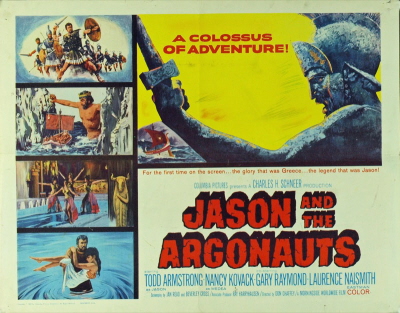 #4: Hellboy – the story of a demon raised by a loving father, which explores the question of nature vs. nurture. Very funny, oddly moving, terrific dialogue, fine acting, and stunning visuals.

#3: The Wizard of Oz – demographically driven into my soul. I grew up seeing it once a year, and never in color until the neighbors got a color TV in the mid 1960’s. The Lion leaping through the window still sends my brother and I into gales of uncontrollable laughter.

#2: Jason and the Argonauts – Harryhausen at his best. The sight of Talos turning his head to look at the Argonauts as they rob his temple still gives me chills.

#1: The Lord of the Rings II, The Two Towers – Yes, the Orcs die too easily, and the banter between Legolas and Gimli was silly, but Gollum was as fresh and wondrous an innovation as I have seen in many years, and the battle for Helm’s Deep was spectacular.

Nice list! Which Harryhausen to choose will always be a subject of some debate — me, I’m torn between Jason and Golden Voyage.

As far as Hellboy, my theory is that Hellboy was a Mike Mignola Hellboy film directed by Guillermo del Toro, while Hellboy II was a del Toro film that just happened to feature Mignola’s characters.

I haven’t seen STORM RIDER, but I’ll speak up in defense of JUMANJI anyway. A much underated fantasy film (as was its indirect sequel, ZATHURA).

Lists like this are an open invitation for debate, of course, so I’m not going to second guess any of David’s choices. Except to say that any list that doesn’t contain IT’S A WONDERFUL LIFE is fundamentally flawed.

And where’s WATERSHIP DOWN?

I have not seen Storm Rider either, but will do so (one of the benefits of a list like this is recommendations from commentors). I do remember an animated movie from my childhood, from Japan, I think, about a monkey who is given magic by the gods, ultimately challenging them when his ego outgrows his abilities. Anyone know the movie and whether it’s available? GOLDEN VOYAGE was first-class Harryhausen, but not as good a movie as JASON.

IT’S A WONDERFUL LIFE is a Christmas movie (probably the best of them), and is therefore excluded. WATERSHIP DOWN probably makes the top twenty.

> I do remember an animated movie from my childhood, from Japan, I think, about a monkey who is given magic by the gods, ultimately challenging them when his ego outgrows his abilities. Anyone know the movie and whether it’s available?

I should probably revisit Jumanji at some point. I do love the original book (and pretty much everything else by Chris van Allsburg — I went through a phase years ago where Mysteries of Harris Burdick was my go-to gift for anyone regardless of age).

[…] the season for Top Ten lists. David E. Harris kicked it off here this morning with his Arbitrary Top 10: Fantasy Films (which missed Watership Down and It’s a Wonderful Life, but at least had the good sense to […]

Alakazam the Great it is. Thanks!

If we were rating performances in fantasy films, I would agree with your high ranking of Williams’s performance in Jumanji (though I would still award the crown to Sean Astin’s performance as Sam Gamgee). Nothing else about Jumanji rose to Williams’s level, though. I wanted to like the film, because Chris Van Allsburg’s books are so sublimely. It just didn’t work for me.

Gilliam’s Munchausen gets a bum rap because its box office figures disappointed the Hollywood money people. The film wasn’t for everyone–it didn’t hit the gallows humor sweet spot for people who loved the darkness of Gilliam’sBrazil–and that’s fine. Munchausen‘s general reputation as a flop, though, is entirely about the balance sheet. It would be in the middle of my Top 50 List.

If I were alone on a desert island with nothing but films for company, I would absolutely rather have Fantasia than Pan’s Labyrinth or Time Bandits. If you were deciding which friend to bring to a desert island as your only human companion, would you bring your brillaint, talented, but clinically depressed friend, or your less extraordinary friend who can reliably cheer you up in adversity?

Your point about the kid-heavy list on Rotten Tomatoes is certainly valid. I would propose exempting Miyazaki’s Princess Mononoke, which was made for an adult audience and has a fair amount of graphic violence. I’m not sure I was old enough to see the moment when the hero slices off a foe’s arm at the shoulder.

Dragonslayer deserves a high spot on any top fantasy film list. The story, the writing, and the performances have all aged so well that the 1981 special effects don’t mar the experience at all. The film is a perfect specimen of itself. After a steady diet of Hollywood blockbusters, it’s mighty refreshing.

Thanks for your comment. MUNCHAUSEN did not work for me at all. The movie was all about tone, and it flat out missed. JUMANJI did not. DRAGONSLAYER is a fine fantasy film, a cut above its many imitators (including DRAGONHEART), and is in my top 20. FANTASIA, while completely original and beautifully animated, would soon be hurled into the ocean fronting any desert isle that imprisoned me. PRINCESS MONONOKE is probably the best of the Miyazaki films I’ve seen, but anime annoys me (which may be attributable to my JOHNNY QUEST upbringing).

OK, I’m a little late to the party, but what about the following films?

I think any of these are more memorable than,say, Jumanji, Splash or Ladyhawke. Heck I’d put Peggy Sue Got Married over Jumanji.

Oh, and I was happy to see the comments about Alakazam the Great. This was one of the very first anime movies to make it to the US. I saw it 4-5 times on Saturday TV in ~ 1963 in California, and have always had fond memories of it. It is now available sometimes on ebay and sometimes on other forums (fora?)(http://www.amazon.com/s/ref=nb_sb_noss_1/184-1044910-8673347?url=search-alias%3Daps&field-keywords=alakazam+the+great). Watching it years later was enthralling, and I was interested to see how many stock anime characters appear. I was very happy to show this movie to my teenage sons. Thanks for discussing it.

Okay, I’ll admit I whiffed on STARDUST. Loved the book and thought the movie was delightful. I have not seen BELLE ET LA BETE but will do so. I have not seen the THIEF OF BAGDAD for decades and should watch it again, but it did not leave a lasting memory (as did, say, JACK THE GIANT KILLER, which I understand is being remade). PLEASANTVILLE was pleasant, but not outstanding, in spite of really good performances by Toby McGuire and William H. Macy. PEGGY SUE was overrated in my book, and probably straddles the murky line of science fiction v. fantasy.

[…] had some wonderful conversations here at Black Gate about best-of lists lately, as we do whenever a high profile best-of list comes out. Two contradictory (but equally visceral) […]

[…] discussion on a website devoted to fantasy media (an interesting issue David E. Harris raised in his post of December 26, 2012). Although billed as a comedy, and by no means a traditional fantasy or […]