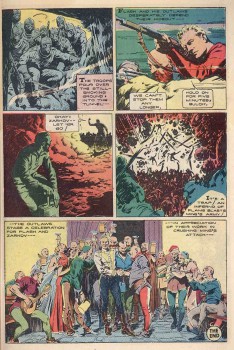 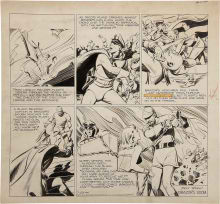 “The Royal Hunt” was the eighth installment of Austin Briggs’s daily Flash Gordon comic strip serial for King Features Syndicate. Originally published between November 27, 1942 and April 21, 1943, “The Royal Hunt” follows on directly from “Queen Tigra of Forestia” with the Queen decreeing they all take part in a lion hunt. She makes sure that Dale is given an untamed horse in an effort to injure her rival for Flash’s affections. Meantime, her former consort, Prince Cugar, manages to escape from his cell while the others are otherwise occupied.

While Briggs is no match for Alex Raymond when it comes to illustrating the splendor and pageantry of Mongo, his scenes of Flash’s bare-handed battle with the lion, when he breaks the cat’s back, are as exciting as anything found in the contemporaneous Tarzan newspaper strip. The incident itself seems out of character for Flash and more suited to Edgar Rice Burroughs’s celebrated jungle lord, as much as Flash’s punching out a horse seems better-suited to a western pulp hero.

More troubling for contemporary readers is the continued sexism, unique to Briggs’s take on the character, with the fiercely independent Queen Tigra finding she enjoys having a man give her orders. While Alex Raymond’s dichotomy between virtuous Dale and the exotic, sexually liberated women of Mongo may have been rooted in classical virgin/whore stereotypes, his seminal Sunday strip never demeaned his female characters as Briggs regularly did in the daily strip. This is unfortunate and, coupled with Briggs’s relatively inferior art and plotting, serves to undermine his success as Raymond’s heir once the series’ creator departed the Sunday strip.

Prince Cugar sabotages the bridge the hunting party must cross, leading to Flash, Dale, and their steeds being dumped into a shark-infested river. The horses and the lion Flash vanquished are quickly devoured in the sharks’ feeding frenzy. Trapped from reaching the shore by the savage predators, Flash prepares to shoot Dale and himself to spare them from a horrible death when, unexpectedly, Queen Tigra comes to the rescue, sacrificing her steed to distract the sharks and throwing Flash and Dale a vine to pull them free. Cugar is not so easily thwarted and he risks all by shooting the vine sending Flash and Dale plunging back into the river. Dale quickly swims to shore and, with Tigra holding off the sharks with her laser pistol, Dale helps Flash out of the river. 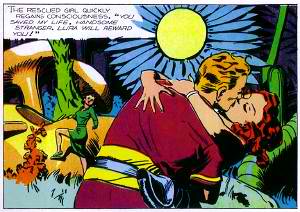 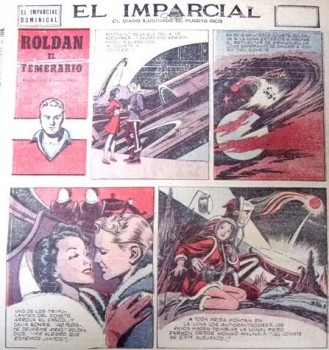 An enraged Prince Cugar determines to assassinate all three of them. Flash decides he has no choice but to confront Cugar. While Queen Tigra and Dale head for safety, a lion picks up their trail. The jealous queen decides it is the perfect opportunity to rid herself of her rival for Flash. Dale dives into the river to escape the hungry lion. She and the predatory cat end up floating on a log together through the shark-infested waters. Unable to resist its instinct to kill, the lion springs for Dale and tumbles into the river where it is set upon by the sharks.

Tigra catches up with Flash and tells her that she saw Dale devoured by a lion. Flash rushes to the banks of the river and finds part of the lion’s skeleton washed ashore. Devastated by his loss, Flash falls into despair. Meantime, Dale is rescued from the sharks by Cugar, who uses her as bait to lure Flash into a trap. Tying her to a tree, he sends a smoke signal distress call up for Flash, who rushes to Dale’s rescue. Blundering into Cugar’s snare, Flash is suspended in mid-air by the snare. Tigra shoots him down, but is wounded when Cugar attempts to assassinate her.

Just as Cugar is about to execute the Queen, Dale, and Flash, he is attacked by a dinosaur, which chases the prince up a tree. Flash breaks free of his bonds and quickly unties Dale and Tigra. Flash kills the dinosaur with a blast from his laser pistol, but Cugar escapes in the confusion. The traitor doesn’t get far before he falls into the clutches of a giant land-locked octopus. Flash attempts to rescue him and likewise finds himself a prisoner of the behemoth’s terrible tentacles. Dale and Tigra save Flash, who manages to kill the octopus with a well-aimed laser blast before Cugar attacks him once more.

The Prince is easily overcome and bound. The Queen is eager to execute him, but Flash insists he stand trial for treason instead. On their journey to Forestia’s capitol, Cugar makes one last attempt to exact revenge by attacking Flash as they cross a wooden bridge between two mountainous peaks. While wrestling with one another, Cugar tumbles over the edge of the bridge to his death. The storyline comes to an abrupt finish with Queen Tigra reconciled to the fact that she cannot win Flash away from Dale and filled with growing bitterness toward the two of them as a result.

“The Royal Hunt” has shown Austin Briggs at his best with particularly gripping sequences in shark-infested waters and in the unarmed combat with the lion. The constraints of a daily strip made it impossible for the artist to compete on the scale of the Sunday strip, but Briggs has begun to show some promise at last. While he certainly has his defenders, for this reader, he falls short as a worthy heir to Alex Raymond, but he is owed a debt for having been the first to continue the classic series.