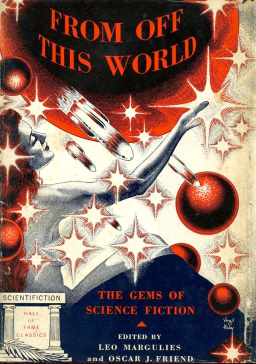 Back in May, at the Windy City Pulp & Paper show here in Chicago, I purchased four boxes of books from the vast collection of Martin H. Greenberg. I’ve been slowly unpacking them ever since. They’ve been a treasure trove of vintage paperbacks and fantastic old anthologies, occasionally with scribbled notes from (presumably) Greenberg in the margins.

I’ve written about a few finds already, including a fabulous anthology edited by Leo Margulies and Oscar J. Friend, The Giant Anthology of Science Fiction, first published in 1954. This week, I want to talk about another Margulies and Friend title, a collection of science fiction culled from Wonder Stories/Thrilling Wonder Stories and published in 1949: From Off This World: Gems of Science Fiction Chosen From “Hall of Fame Classics.”

The first thing to note is the gorgeous cover illustration, by none other than Virgil Finlay (click the image at left for a bigger version).

But equally impressive is the Table of Contents, which includes some of the best pulp SF stories ever published, including “The Man Who Evolved” by Edmond Hamilton; “The City of the Singing Flame” and “Beyond the Singing Flame” by Clark Ashton Smith; “A Martian Odyssey” by Stanley G. Weinbaum; and others by Jack Williamson, Henry Kuttner, Eando Binder, P. Schuyler Miller, and many more.

Editor Leo Margulies, who as editorial chief of Standard Magazines was also editor of pulp magazines Startling Stories and Thrilling Wonder Stories, featured “Hall of Fame Classic” SF reprints in Startling. The 18 stories here are taken from those selections, all originally published between 1929 and 1937, as Margulies and Friend explain in their introduction:

Compiled as they are from ten years of HALL OF FAME reprint selections in Startling Stories magazine, they are in effect, the pick of science fiction stories that have survived both the years and today’s amazingly swift scientific progress. In themselves they compose a history of the growth of science fiction over the vital decades just passed.

Actually science fiction — or scientifiction if you will — is the newest development in contemporary literature. It is far and away the most imaginative.

Their comments become even more interesting when the editors turn to the rapid (and frequently horrifying) advance of science during World War II, ended just a scant four years before these words were written.

It took the horrid climax of World War Two, with its A-bombs and V2 rockets, fully to awaken a hitherto lethargic general public to the realization that applied science could and already had utterly outstripped the limits of reason of minds attuned merely to the humdrum needs and crises of daily living. Only the worlds of science and science fiction were emotionally and psychologically prepared for the atomic age…

A large proportion of new readers, drawn to science fiction by their newly-aroused awareness of what the scientific mind could accomplish, found themselves caught in a bewildering world of space-lingo, of yet-to-be discovered sciences, of words no dictionary has included to date. They, of course, needed and need indoctrination — indoctrination in the most fascinating study of prophetic learning ever made available to public and experts alike.

To understand this new world they must follow through the years the steps by which science fiction has evolved to its present state, by which it has managed to maintain its vast lead over the already bewildering world of real science.

Nothing communicates the “newly-aroused awareness of what the scientific mind could accomplish” like a book with a beautiful naked woman on the cover. I’ve worked with scientific minds, and this approach makes a lot of sense.

“Only the worlds of science and science fiction were emotionally and psychologically prepared for the atomic age,” indeed. 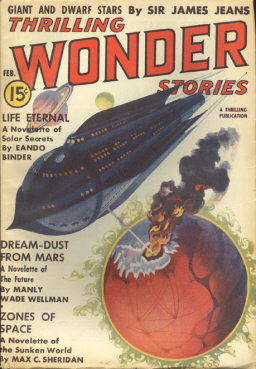 From Off This World is a truly fabulous collection of pulp science fiction and fantasy, from some of the best writers in the field. Here’s the complete table of contents:

From Off This World was published in hardcover in 1949 by Merlin Press. It is 435 pages. I have no idea what the original price was, but I paid 5 bucks for this copy. It has never been reprinted, and there is no digital version. As of this writing, a dozen copies are available from Amazon.com starting at 10 bucks. You can also buy a brand new facsimile dust jacket, turning your tattered old hardcover into a beautiful vintage collectible, for 22 bucks here.

OK, somebody needs to start putting together ebook versions of all of these Merlin anthologies RIGHT NOW.

[…] maybe. As enjoyable as that book is, it would look a lot better with that Virgil Finlay wraparound cover. I’m not asking much — just a brand new dust jacket for an obscure 60-year old […]

[…] Vintage Treasures: From off this World edited by Leo Margulies and Oscar J Friend […]