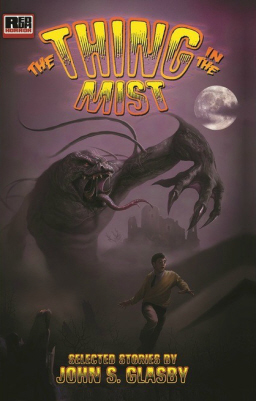 I’m a fan of dark fantasy and horror, and pay attention to most of the major writers — especially those of the pulp era (1930 to about 1960). But I’m woefully ignorant of British horror, especially of the same period.

Fortunately, there are publishers working hard to correct that. And it’s always a delight to discover a major retrospective of a British pulp horror writer I’m not familiar with. That’s the case with John S. Glasby, who wrote around 25 SF and fantasy novels for Badger Books, most under pseudonyms such as “A. J Merak” and the Badger house names “Karl Zeigfreid,” “John E. Muller,” and “Victor LaSalle.”

Now Redrum Horror has published The Thing in the Mist: Selected Stories by John S. Glasby, a tantalizing collection of some of his best short fiction from the heyday of British pulp horror:

Between 1954 and 1967, British publisher Badger Books released over one hundred issues of the horror pulp digest Supernatural Stories, nearly half of which were written by one of the most prolific genre writers of his time, John S. Glasby.

Here, collected for the first time, are eleven of Glasby’s finest contributions to Supernatural Stories, tales of otherworldly terror and ancient evil in the Lovecraftian tradition. Guaranteed to chill and delight, The Thing in the Mist is a must-read for any fan of classic pulp horror.

This edition also includes an introduction by the late Glasby’s son, Edmund Glasby, and an informative afterword by longtime colleague, Philip Harbottle.

The Thing in the Mist: Selected Stories by John S. Glasby is Redrum Horror #6, and was published on September 15. It is 380 pages in trade paperback for $13.99, or just $3.99 in digital format. Get more details at the Redrum Horror website.