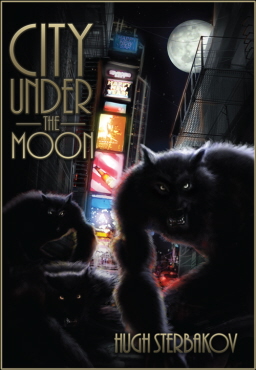 I love a good book. I also love a well-marketed book. As someone who’s been a publisher in this industry for over a decade, it gives me real pleasure to see someone bring a new title to market with genuine energy, enthusiasm, and inventiveness. It’s even better — and frankly, much rarer — to see a small press or self-published book get anything like a real marketing campaign.

Hugh Sterbakov’s City Under the Moon may be the best marketed self-published book I’ve ever seen. Anyone trying to publish a fantasy novel in America could learn from this man.

Now, I’m not 100% certain it’s self-published. But when the publisher (Ben & Derek Ink Inc.) neglects to have a website, publish other books, mention their address, or even put their name on the cover, that’s frequently a big clue.

Admittedly, Mr. Sterbakov has resources most aspiring self-publishers don’t. He’s a writer for Marvel Comics and Seth Green’s Robot Chicken, and in the latter capacity he’s been nominated for two Emmys. His animated comedy script Hell & Back is now in production, staring Mila Kunis and Susan Sarandon.

How does any of this help him? Here are just a sample of the blurbs for his novel:

Superpowered teens, angst, action and comedy… I don’t get it. –– Joss Whedon

When you get blurbs from Joss Whedon, Mila Kunis and Seth Green on your self-published novel, you’re doing something right.

What about the book? I read the first few chapters, and so far it’s everything the blurbs promise — funny, fast-paced, and peopled with likable characters.

On New Year’s Eve in Manhattan, a werewolf attack sparks an epidemic. Each night the victims multiply. The disease spreads. An army grows.

As authorities scramble to contain the monsters, they discover that one man is behind them. His name is Demetrius Valenkov. And he has a message for the United States:

The disease evades an international coalition of top scientists. The president must prepare an unspeakable solution.

But one person has picked up Demetrius Valenkov’s trail: FBI counterterrorism specialist Brianna Tildascow. Forged by tragedy, training and technology, she’s the government’s most efficient–and ruthless–manhunter.

Assisted by a horror blogger and a squad of elite commandos, Tildascow must hunt Valenkov across the globe and uncover the sinister secret of the curse threatening mankind. Tens of thousands are infected. Time is running out.

Sterbakov isn’t just relying on his Hollywood contacts to get the word out. He contacted us with a friendly note last month, mentioned he discovered us through the Horror Writers Association website, and offered a review copy. He sent it along with a personalized note, in the process demonstrating just enough knowledge of Black Gate to be confident that we’re primarily a fantasy site.

That already puts him ahead of 90% of the small press and self-published authors who bombard us with form letters every month. And none of those guys have a blurb from Mila Kunis.

It doesn’t take a lot to get our attention. Really, we love books, and we love to talk about ’em. But being friendly and personable, and demonstrating that you know what we’re all about doesn’t hurt. Sterbakov is doing everything right, and the celebrity blurbs are just icing on the cake.

City Under the Moon was published March 2012. It is $19.99 in trade paperback, and just $4.99 for the digital version. You can read a sample chapter and get more info at the website. Check it out.

Damnit, I’m really sorry now I turned down Joss Whedon and Mila Kunis when they were begging to work with me. If only I’d known 🙁

The next time Mila Kunis contacts you, give her my number.

I *never* introduce you to beautiful women…