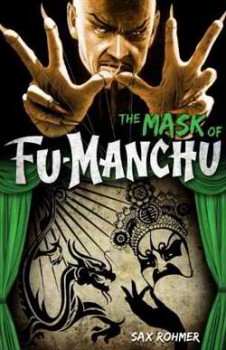 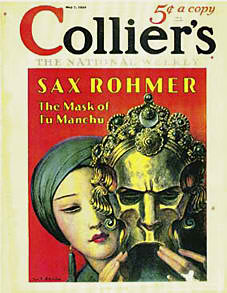 Sir Lionel and his party are informed by the authorities that El Mokanna still has fanatical followers in Persia and that a new imam has risen to prominence and is seeking the treasures they foolishly recovered in defiling the Masked Prophet’s burial place (something no Moslem would dare to have disturbed). Worse still, this new imam is believed by the cultists to be the resurrected El Mokanna. Soon enough, Sir Denis Nayland Smith arrives on the scene. While Greville is relieved to see him, he is puzzled why Scotland Yard is involved. Sir Denis informs him he retired from the Yard six months ago to accept a post with British Intelligence. Smith is concerned that Sir Lionel’s actions will result in an uprising that will threaten the stability of the Near and Far East. 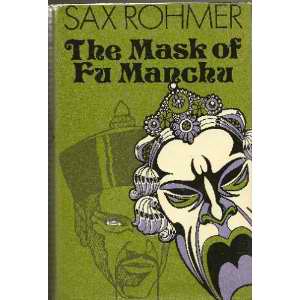 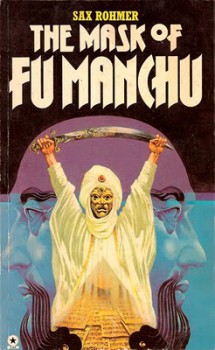 Rohmer successfully transitions his Yellow Peril formula from China to the Middle East with this book. At the time, the broad definition of the Orient understood in the British Empire encompassed both these regions, among others. Within a few brief chapters, Rohmer has established a fascinating and convincing back-story for the Masked Prophet, loosely based on El Mahdi and chockfull of the exotic appeal of Persia. Nowhere better illustrates this than Rohmer’s introduction of the Ghost Mosque, the abandoned place of worship situated across the street from the large house Sir Lionel is renting. Years before, the local imam had an affair with the Grand Sherif’s favorite wife. The lovers were discovered together in the mosque and, after a grisly torture by eunuchs, were hurled to their deaths from the minaret. It is believed their ghostly wailing can still be heard and no Moslem will dare set foot in the mosque or choose to occupy the surrounding property. A clever explanation for how Sir Lionel is able to rent a large household quickly in Ispahan.

It will be evident to pulp fans that the Ghost Mosque holds the key to Van Berg’s murder. Sir Denis knows another attempt will be made to steal the jade chest containing the artifacts and, sure enough, it happens that very night with Greville hidden in the dark, keeping a silent vigil on the proceedings. Rohmer builds suspense beautifully as Shan hears what sounds like a bat at the shutter outside his bedroom window. Slowly the shutter opens and a dark creature crawls in through the window. It is all our hero can do to obey Sir Denis’s direction to do nothing but observe no matter what happens. The creature walks on all fours and climbs onto the bed, arranged with pillows to appear to contain a sleeping figure. Shan smells the overpowering odor of mimosa and then watches disbelievingly as the strange dark figure pulls the jade chest to the window. Standing upright, Greville sees it is an African native. The chest is pushed out the window and then the African vanishes into thin air.

Suddenly, Nayland Smith bursts in the room, rushes to the window and fires his revolver at the Ghost Mosque across the street. An amazed Greville sees the native on a thin line that carries him and the jade chest through the air to the mosque opposite them. Smith shoots and kills the native, but not before another native appears at the window of the minaret and manages to retrieve the jade chest. A gunfight ensues between Sir Denis and the native. Despite Smith sending the authorities to surround the mosque, the native has escaped into the recesses of the mosque after emptying his revolver. 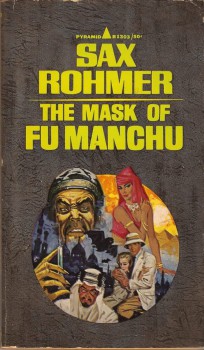 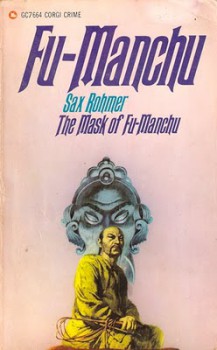 Sir Denis quickly explains that the dead man was Van Berg’s assassin and gained entry in the same fashion as the preceding night. He informs Greville that the mimosa perfume was drugged and should have prevented the sleeper from awakening when the jade chest was removed. Unfortunately for Van Berg, the professor had a pair of kittens sleeping on his bed with him who managed to rouse him before the drug took effect. Van Berg was stabbed to death as a result of his successful attempt to save the artifacts and for proof of this theory, Smith notes that the native left his knife behind when he successfully made off with the jade chest on his return visit.

Sir Denis deduces from Sir Lionel’s attitude that the artifacts were never in the jade chest that Van Berg died protecting. Barton admits to the deception, but refuses to reveal where they are hidden. He gleefully applauds Van Berg’s death having been avenged and delights in the fact that their enemies have stolen an empty chest for all of their efforts. Sir Lionel recognizes the natives for members of a secret society in West Africa, but concludes they must be slaves of the followers of El Mokanna, for nothing else would explain their presence in Persia. Smith states he believes that all secret societies are offshoots of the Si-Fan in a wonderful echo of Masonic conspiracy theory from Rohmer, an author who excelled at building suspense through heightened paranoia. Smith then shocks Sir Lionel and his team by revealing the identity of the new imam proclaimed to be the resurrected El Mokanna is none other than Dr. Fu Manchu!

Rohmer does a brilliant job of building the British fear of an Islamic holy war and then revealing the Yellow Peril personified as the head of this latest threat to the Empire. From a sociological perspective, it is interesting to note the common colonial attitudes in fiction of the period show contempt for undeveloped native cultures and fear of civilized foreign cultures. While it is clear that Rohmer had a deep-rooted fascination with the Orient (it is interesting to note that much of his writing income was spent on financing his trips to Egypt and the Middle East), he understood from the very beginning of his career that the only way to indulge his passion was to exploit the fears and unspoken desires of the West to emulate the East, if only through the pages of a novel. This is made explicit by the portrayal of Sir Lionel, for all of his crassness and disrespect to other nations, the man clearly loves the East and makes no bones of telling Smith that if he were Christian, he would consider Sir Denis’ unannounced arrival an answer to prayers. Portraying Sir Lionel as an atheist was scandalous enough in 1932, but Rohmer goes further in suggesting that Sir Lionel would not object to Shan and Rima sleeping together before marriage.

Rohmer’s libertine attitudes would soon result in the author running afoul of the Archbishop of Canterbury and the subsequent church condemnation of his fiction for encouraging pre-marital sex. The forbidden fruits promised by Yellow Peril fiction were dating quickly in the waning days of the Empire (although in truth, the Cold War spy fiction of the 1950s and 1960s was really just more of the same under a new name), but with The Mask of Fu Manchu, Rohmer had hit on the ultimate realization of the hopes and fears that the East embodied for the West between World Wars in the last century.