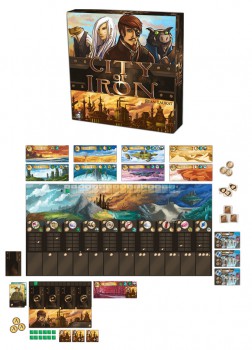 Some cards allow for extra actions or enhance certain actions, such as collecting more taxes or science, but the ultimate goal is to gain the most victory points. Victory points are gained throughout game play for various actions, including having the most resources, but there are also end-of-game modifiers for:

Want to learn more? The major source of information is, of course, their Kickstarter website. First, there’s the official Kickstarter promo video, which comes in at about a minute and a half, but doesn’t provide much in the way of information about game mechanics. There’s also a bit more detailed 6-minute overview of the game. For someone who really wants a deep dive into the game, however, check out the nearly-14-minute-long video by Tom Vasel (host of The Dice Tower gaming podcast), which covers many aspects of gameplay. And, if you really want to absorb the mechanics, you can even go and directly download the rulebook.

The game is designed for 2-4 players with a runtime of about 90 minutes. I can’t find a direct age requirement listed on the promotional materials (or the rulebook), but there is a “family game” variant described, which streamlines some of the more complex rules, making the game more accessible for younger players. Really, though, the family game variant seems to mostly just remove the military and conquering aspect from the game, rather than simplifying things significantly.

The Kickstarter campaign ends on October 3. As of this writing, the game has about $20,000 toward its $30,000 goal, with 20 days to go. There are some great overstretch goals, though, that I’d certainly love to see incorporated into the game:

So if you’re a board gamer, I’d definitely say that this game is one you should check out while it’s still available on Kickstarter. The visuals and gameplay look like they can’t be missed.

And, by the way, did I mention that this game has bottled demons?