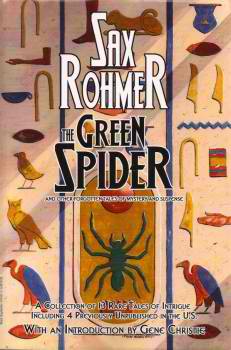 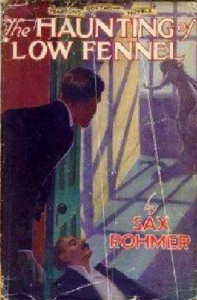 Sir Denis Nayland Smith is the largely unsung protagonist of all of Sax Rohmer’s novels and stories featuring the notorious Dr. Fu Manchu. The brilliant Chinese criminal genius constantly overshadowed the stalwart British subject who did his best to route his megalomaniacal schemes over the course of thirteen novels and four shorter works published between 1912 and 1959. The legendary villain overshadowed Sir Denis to such a degree that many readers were unaware that the author showcased Smith without his customary nemesis in three short stories published between 1920 and 1932.

When Rohmer created the character a century ago, Smith was depicted as a colonial administrator, stationed in Burma and granted a roving commission by the Home Office to bring Dr. Fu Manchu to justice. His childhood friend, Dr. Petrie, played Watson to Smith’s Holmes, chronicling his adventures for posterity and ably assisting him wherever possible. Petrie’s job was made easy in as much as Smith rarely did any actual detecting. The duo generally reacted to Fu Manchu’s latest atrocity and then spent the rest of the book trying to anticipate his next move, check him, be captured, escape, and inevitably lead a daring raid that would end in something less than a complete success. Despite it all, Smith and Petrie persevered and when Rohmer ended the initial run of the series in 1917, readers likely expected they had heard the last of Nayland Smith’s exploits. Rohmer, however, was too fond of the character to let him retire peacefully.

“The Blue Monkey” was one of two original stories that appeared in the author’s first collection of short fiction, The Haunting of Low Fennel, published in the UK in 1920 by C. Arthur Pearson. It was the only title in the collection not subsequently published in the US by Doubleday in 1933 as part of Tales of East and West. The story finds Smith and Petrie on holiday in Dartmoor just after the Fu Manchu business has concluded, when they become embroiled in a murder investigation. Smith is holidaying under the assumed identity of Mr. East. Their neighbor, Sir Jeffrey Baird, is the murder victim. The duo reluctantly responds to the call of duty when Sir Jeffrey’s daughter, Olive, finds her father’s body at Black Gap on the moors. 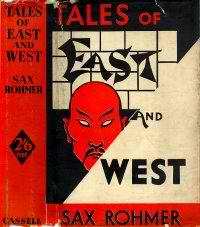 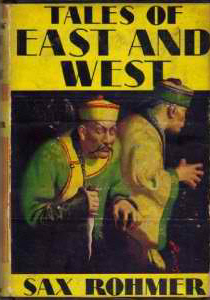 The story is a slight one and Rohmer wastes no time casting suspicion on Sir Jeffrey’s Greek secretary, Mr. Damopolon, whose Mediterranean blood is reason enough for Dr. Petrie to suspect him. Sir Jeffrey was returning from Sotheby’s auction house when he met his fate. He was bearing the latest acquisition for his collection of curios, a blue porcelain ape of Burmese origin. He was passing by Black Gap, the opening to an ancient Roman mine, when he was murdered. Petrie examines the dead man and concludes he was struck violently on the head, but died of strangulation. The only tracks are curiously those of a small child and they move away from the body rather than following the same path. Oddly enough, there is no sign of Sir Jeffrey’s prized porcelain monkey.

Petrie is initially convinced that the footprints were left by the monkey, which somehow came to life. He is shocked when Smith retrieves the blue monkey, buried in the moor. Together, they confront Mr. Damopolon. Smith points out that the blue monkey is actually a worthless curio and that he concluded the killer carefully walked in Sir Jeffrey’s tracks before retracing his steps backwards to escape the scene of the crime, while carefully using the porcelain monkey to leave retreating footprints behind. Smith offers damning evidence that it was Damopolon who murdered his employer and concealed the blue monkey in the moor. The secretary confesses and reveals that he and Olive had been secretly married and that he had reason to hate her disapproving father, as well as a desperate need for Olive’s inheritance. Before Smith and Petrie can stop him, the Greek draws a pistol from his pocket, places it at his temple, and pulls the trigger. It is a dramatic ending and one that borrows from real life as the author spent several years with a secret marriage of his own, while he continued to live with and care for his own disapproving father.

After reviving the Fu Manchu series a dozen years later with Daughter of Fu Manchu, Rohmer opted to rework “The Blue Monkey” as “The Mark of the Monkey.” The story first appeared in Brittania & Eve in April 1931, before being printed in the US in Collier’s two months later. Canadian readers first found the story in Family Herald & Star Weekly the following year, just before it was collected in Rohmer’s anthology of short fiction, Tales of East and West, which was published in the UK by Cassell. A note to collectors: the UK edition of this title does not recycle material from The Haunting of Low Fennel as the identically-titled US edition from Doubleday published in 1933 did. 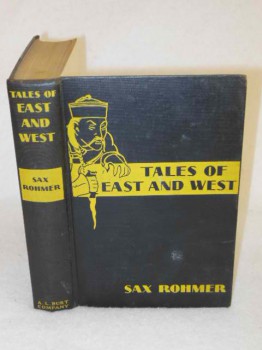 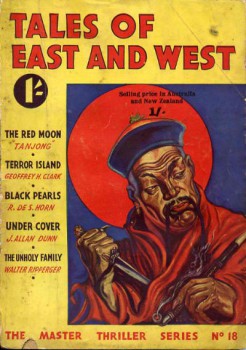 “The Mark of the Monkey” likewise begins with Smith and Petrie on holiday in Dartmoor when Smith is troubled to find he recognizes their neighbor’s secretary, but not the man’s name. John Randolph Pine is employed by the celebrated botanist, Henry Marsburg, and appears to be Eurasian. Smith insists on paying a visit to Marsburg and his daughter, Isola, at their neighboring estate. The following day, while exploring the Moors, they come across Isola Marsburg, who informs them that her dog is missing. Smith and Petrie later stumble across the dog’s corpse in a nearby cave. Petrie confirms the dog was poisoned. Smith recognizes the mysterious purple marks on the dog’s throat as the Hanuman Death, or the Mark of the Monkey, an inexplicable plague he encountered while stationed in Burma.

While puzzling the mystery, Isola Marsburg bursts into the room, frantic over her father, before collapsing. Smith and Petrie rush to the moors to the site of an ancient Roman mine, where they discover Henry Marsburg has died a victim of the Hanuman Death, only this time Smith and Petrie see a peculiar fungus growing in the cave that is the entrance to the mine shaft. Returning to Marsburg’s estate, Smith confronts Pine, who Smith reveals is Dr. Gwalia, a man he knew in Burma who murdered his wife, but fled the country before Smith could prove any wrongdoing. Pine insists that Smith is mistaken until Isola rushes in and reveals that she and Pine (who she calls Jean) are married but were forced to keep their marriage a secret to placate her disapproving father. Dr. Gwalia confesses he killed his father-in-law with the same poison fungus he used to kill his first wife. Faced with the consequences of his actions, he exposes himself to the poison fungus and dies horribly at Smith and Petrie’s feet in the shocking conclusion.

The final of the three stories, “The Turkish Yataghan” first appeared in Collier’s in January 1932 and was collected in both the UK and US editions of Tales of East and West. The story sees Smith and Shan Greville (narrator of Daughter of Fu Manchu and the forthcoming The Mask of Fu Manchu) in Limehouse when a drunken sailor tries selling them a Turkish Yataghan. Smith has no use for the blade and sends the man on his way. Visiting a club, The Blue Lamp, where the proprietor Jo Chang’s English wife is the featured performer in yellowface, they bump into Inspector Yale of Scotland Yard (who had a brief role in Daughter of Fu Manchu). The Inspector has just come from the home of a curio dealer called Peter Anderman, who has just been found murdered with a Turkish Yataghan at his side.

The trio quickly leave for the dead man’s house, where it is established he was a hashish user and notorious womanizer, with pornographic photographs framed on the walls of his study. Scotland Yard picks up the drunken sailor on Smith’s description. The angry sailor tells how he met Anderman just after he approached Smith and Greville. He tells of his unpleasant transaction with the curio dealer and how the man gypped him, but he maintains he never entered his home and that the entire transaction occurred outside. Smith has the sailor released as his story matches that given by Anderman’s secretary, Michael.

Surprisingly, Michael is only a red herring and the secretary is not actually guilty of murdering his unlikable employer, as in the first two stories. Greville notes Michael’s Jewish heritage to cue the reader that his ethnicity is suspect, but Rohmer has a different trail to pursue and has Smith surprise both Greville and Yale by returning to The Blue Lamp afterhours. There they confront Jo Chang, who eventually admits that his wife was cuckolding him with Peter Anderman, who was supplying her with hashish. Humiliated by his adulterous wife, he killed Anderman in a crime of passion and was planning on murdering his wife as well. Faced with the consequences of his actions, Jo Chang produces a needle-thin blade from inside his coat and kills himself before the startled eyes of Smith, Greville, and Yale.

It is interesting to note that all three stories written over the course of a dozen years end in the perpetrator committing suicide rather than being brought to justice. The first two stories involve a secret marriage between the dead man’s secretary and his daughter being the reason for the murder and the murder scene being a Roman mine in Dartmoor. The first and third story concern an exotic curio that turns out to be of no value and of no relation to the murder. A mysterious Burmese monkey adds exotic flavor to the mystery for the first two stories. Rohmer was experimenting with mixing up the Fu Manchu formula and trying to decide how best to continue with Nayland Smith outside the confines of a Yellow Peril framework.

These three orphaned adventures have only been collected as part of the Fu Manchu canon once in a set of seven omnibus editions published in France and Belgium in the 1970s. Munsey’s Black Mask imprint recently printed The Haunting of Low Fennel in the US for the first time and Black Dog Books included “The Blue Monkey” in The Green Spider, the initial volume in their Sax Rohmer Library. The US edition of Tales of East and West has been out of print since the limited edition Bookfinger hardcover reprint forty years ago. As scarce as “The Turkish Yataghan” may now be, “The Mark of the Monkey” ranks among Rohmer’s rarest stories ever published in book form, having been out of print for nearly eighty years. Special thanks are due to my good friend, Rick Lai, who helped provide me with a copy of the latter story in order to complete this article.