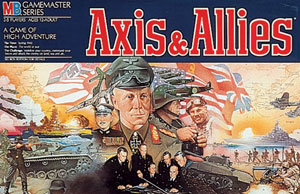 Back in the mid-80s, I would go out to my dad’s house in Las Vegas and spend a few weeks of every summer seeing how he lived his life in the city of sin. It always had its ups and downs, but certainly even twenty-five years later I’ve got some lasting memories that bring a smile to my face.

One such memory is that of going to my first Toys “R” Us, at age 14, with my father to look for a game to bring to his cabin in Utah. Even to this day I can see a ‘wall of games’ in my head, so much bigger than life and beyond what I’d ever thought possible for a kid from the small town cornfields of Indiana.

The game my father and I chose was a huge one, the box seemingly larger than a board game had the right to be. It was called Axis & Allies and it had the most brilliant painted cover you could imagine.

It was produced by Milton Bradley, part of their GameMaster Series, something that took a step beyond what any other company in those days dared to do, make a mass market adult game. To this point, games were almost exclusively for children, and the graphics of such games were similarly geared. 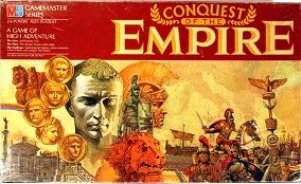 When I saw the box cover to Axis & Allies, there was no doubt that it was bringing something completely different to the table. Gone were the round-faced and top-hat wearing moguls of Monopoly. Absent were the reverse-funnel and multi-colored pieces of Sorry. And into that annals of history went the Roman numeral army markers of Risk.

No, Axis & Allies forever broke the mold, and as my father and I played the game, I was entranced by the possibilities it offered. Certainly, what’s inside the box is what matters with Axis & Allies, but I can’t help but be captivated by the marketing of it and that intrinsically beautiful cover.

On this now classic game’s cover, we see Erwin Rommel holding center stage while framed by Hirohito and Patton, and below them Eisenhower leads a war council at central command. German Panzars, American Shermans, Japanese Battleships, English Bombers, and all the ‘power’ flags flapping in the wind create a stunning background in a visual bonanza. 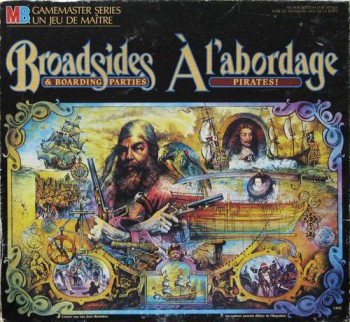 I mean, how can’t you want to play this game after seeing that? Heck, right now I’ve got the sweats wanting to play just writing about it! That is the power of perfect marketing art, and MB hit the nail directly on the head where this game was concerned. They captured war in a romantic and powerful menagerie, and although I’ve never found out who actually painted this scene, I’m thankful for their abilities nonetheless.

Milton Bradley continued their GameMaster Series with four other titles between 1984 and 1986, all of which bore some resemblance to the cover of Axis & Allies.

The 1984 release of Conquest of the Empire also elicited the same visual effect and large box format. Once you see legionaries with banners held high, you understand, if not a bit further removed, the importance of the battles about to be fought beneath the lid as well. Rome IS the empire of the West, and the artistic depiction here is powerful as well.

Cover art for the 3rd 1984 release, Broadsides and Boarding Parties was more abstract in its delivery, and yet all the usual suspects appear for a game about piracy and the Spanish Main. Still, the ability to see painted cover art is what is so different and identifying in this game, and pirates, flintlocks, and galleons bring forth powerful emotions that can’t be denied. 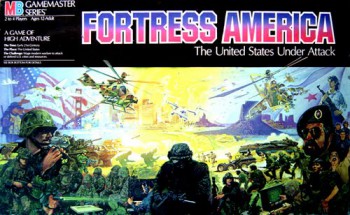 When MB released Fortress America in 1986, they went back to the well of the Axis & Allies motif. This near future collage of a war that has not yet occurred presents a modern flair to the same styles we saw in the WWII predecessor. Hover tanks replace standard armor, modern marines, laser designators, night vision goggles, Chinese inspired invaders, and of course Saddam Hussein round out a box that is a perfect sister ship to A&A.

And lastly we find the similar setup in the final release of the GameMaster Series with Shogun in 1986. This is again a more removed setting, similar to Conquest, but instead of the European theatre, we settle on Feudal Japan. The cover, featuring a lifelike samurai and a plethora of other pre-western opening images continues to evoke the need for play.

In all, these five wonderful games held countless hours of entertainment for gamers, both hardcore and recreational alike, but in my opinion the covers were as brilliant as the mechanics beneath the hood.

If any of my readers have ever played one of these classics, I’d love to hear a tale of it.

I got both Axis & Allies and Shogun as birthday presents in 1986 and still have them. The A&A box died long ago and I’ve repatched the board several times due to overplaying. I’ve also lost enough pieces over time that the British army is…difficult to properly man. The Shogun box is still in decent shape and shelved among the games.

Both games are great. A&A, despite its fixed starting position, is hugely replayable and the number of different possibiliies is vast. I’ve had the Japanese liberate Germany from the allies and conquer England, Russian aircraft carriers in the pacific and everything in between. Shogun is much more flexible, with each game having a different start. Here you can have anything from a several players eliminated on the first round to rounds of maneuver war, ending in all out combat including assassination, surprise mercenary appearances and desperate last stands.

Nightface: My A&A box has a hole chewed in one upper corner, a side bound with brown packing tape, and abuse all over. I’ve long since replaced my figures with WWII miniatures in the same size [although the Americans are Vietnam troops because they look cool]. My white markers are nearly brown from dirty hands, and my dice have long since migrated to my Crown Royal bag as I love the weight of them them and how they roll for me. Yes, a hundred fond memories of this ‘old friend’.