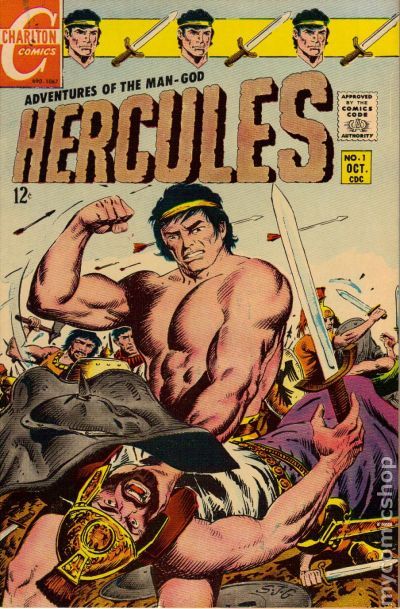 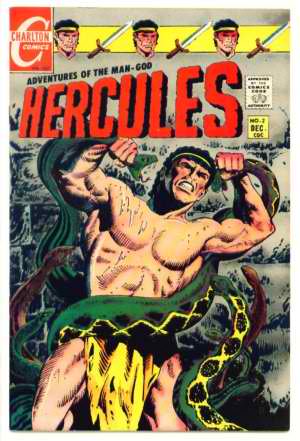 Issue #2, “When Man Meets Monster” gives us our first look at the gods of Mount Olympus (previously portrayed only as disembodied voices from the clouds in the first issue). Hercules’ second labor is to vanquish the giant, Gerion, whose soul inhabits three identical bodies simultaneously. The issue develops Hercules’ back-story further by introducing a wicked stepmother in the form of Hera, who resents Hercules for being the son of Zeus’ first wife. Hera sends a sea monster against Hercules’ ship off the coast of Athens. In a nice bit of invention, the sea monster is depicted as a raging storm with the water taking the shape of a great whale. Zeus intervenes to prevent Hercules from drowning. Reaching shore, the man-god erects the Pillars of Hercules as a monument to his survival with his divine father forming them into the Rock of Gibraltar and the Rock of Ceuta.

Arriving at the castle of Gerion, Hercules wrestles and quickly vanquishes the giant’s first body. Gerion’s second form is more cunning, first attempting to poison Hercules’ wine and then tricking him into stepping though a trap door into a nest of vipers. Hercules survives both of these trials and the giant perishes from the very poison with which he sought to kill the man-god. Gerion’s third and final body mounts a pteranodon and jousts with the unarmed man-god. The two battle astride the pteranodon with the giant falling to his death. Hercules survives the mortally wounded pteranodon’s fall into the ocean. The people of Athens run in fear from the sight of Hercules, believing only a demon could survive a battle with the giant who terrorized them for so long. Disheartened, Zeus makes his first physical appearance to his son to encourage him to persevere in his labors. 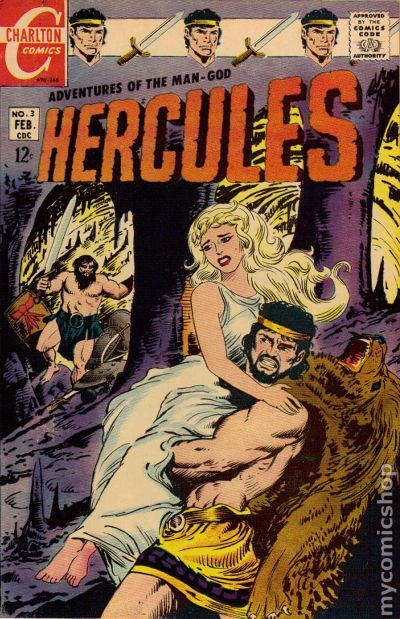 Issue #3, “The Netherworld” sees Glanzman changing the character a bit, giving him a beard to appear more mature and dressing him in the skin of the Nemean Lion from the first issue. The story picks up in Athens where Hercules continues to find rejection from his fellow men. The influence of Stan Lee and Jack Kirby’s early issues of The Incredible Hulk is unmistakable. The man-god interrupts a funeral procession and picks a fight, intending to slaughter the mortals out of his misery. Happily, his old friend King Admetus is among the party and shows the misanthropic man-god some hospitality, inviting him to stay as a guest at his palace. There, Hercules learns that Admetus’ queen, Alcestis, has recently passed away and that it was her funeral procession he attacked. Overwhelmed with guilt for his actions, he begs Zeus to let him journey to Hades to bring Alcestis back from the dead. Zeus agrees, setting the vanquishing of Cerebus, the three-headed hound of Hades, as Hercules’ third labor. As Hercules sets out on his task, Hera sends a shower of arrow heads upon him. O’Neil seems to enjoy water-based weapons, but to his credit he further develops the attraction that the goddess Aphrodite feels for the man-god, which makes her a vital ally for Zeus in watching out for him. Unwittingly, the arrow heads embed in the sheer face of the cliff Hercules must scale to reach the entrance to Hades. Hera’s attempt to murder her stepson only serves to aid his purpose.

Reaching the entrance of Hades, Hercules meets Pluto, dark god of the underworld. Delving deep into an appropriately Dantean vision of Hades, Hercules rescues Alcestis from Death (personified as a giant Grim Reaper) and defeats the fierce Cerebus. O’Neil has a nice touch where Hercules must ignore the pleas of unseen voices crying out to be freed from this place of suffering. There is a recurring gag where the comely women always wish there were some way to reward the man-god, but the chivalrous Hercules always refuses. Admetus is elated to have his Queen returned to him while Hercules sets off to complete his next task. 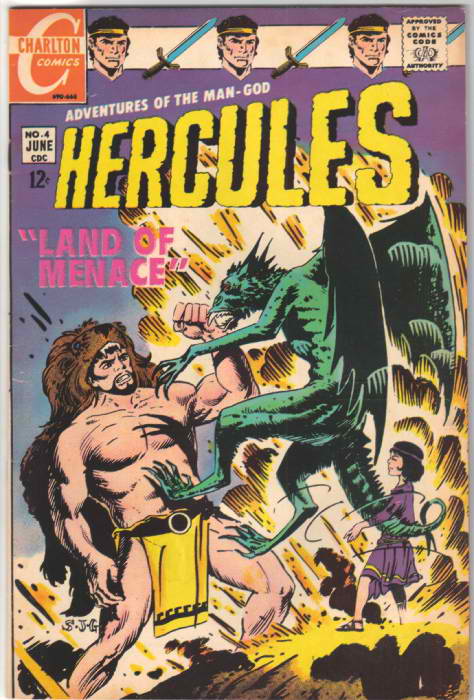 Issue #4, “Land of Menace” opens with Hera appearing to Hercules for the first time and placing the fourth labor before him to retrieve the legendary golden apples from the land of Nul, a Limbo that exists outside of Eternity where even the gods are powerless. Hercules emerges from an inter-dimensional portal to a barren desert where he is set upon by a sentient cactus before being captured by a tribe of demonic harpies who take him before Poov, their king. Escaping the shape-shifting harpies, Hercules encounters the giant, Atlas, a captive of the harpies forced to hold a giant slab over their cavern kingdom to keep out the sun and the rain. Hercules frees Atlas from his bonds and at his bidding, the giant traps the harpies within their cavern kingdom where their black magic spells have conjured flames that inadvertently burn them to death. Atlas helps Hercules retrieve the golden apples and pass safely through the inter-dimensional portal before it closes. Hera is furious that Hercules succeeded in his impossible task, but vows to make sure his next labor will mark his doom. 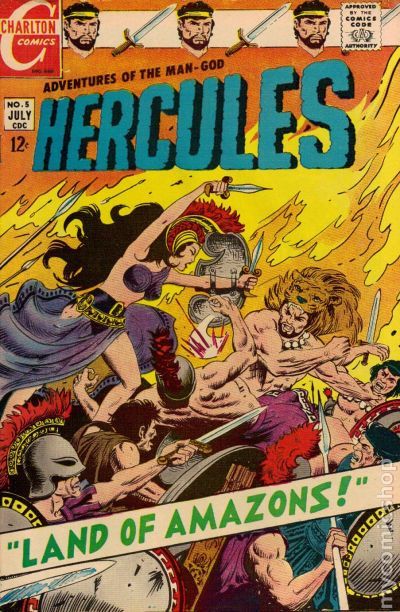 Issue #5, “The Land of Amazons”, starts off with Hercules having become a local celebrity as a matador in the bull ring. Just as he is about to take part in the merry-making with his appreciative audience, a dark cloud covers the city and Hercules is taken up to Mount Olympus before his father and stepmother. Hera sets his next task to retrieve the golden belt of Hippolyta, Queen of the Amazons. Returning to Earth, Hercules again finds himself a pariah, for the citizens who had been so quick to befriend him now fear him for his apparent trafficking with the supernatural. Hercules sets off for the land of the Amazons and encounters a maiden being sacrificed to a dragon. Vanquishing the dragon wins Hercules the affections of Queen Hippolyta, who had sacrificed her handmaiden out of boredom. The Queen wants Hercules for a consort, but plans on burning the handmaiden to death out of jealousy that she has caught the man-god’s eye. Hercules rescues the handmaiden and defeats Queen Hippolyta, obtaining her golden belt for Hera in the process. Denny O’Neil has the handmaiden plead with Hercules to stay so that she can demonstrate her gratitude, but the man-god declines her generous offer as the series original script-writer makes his departure from the title. 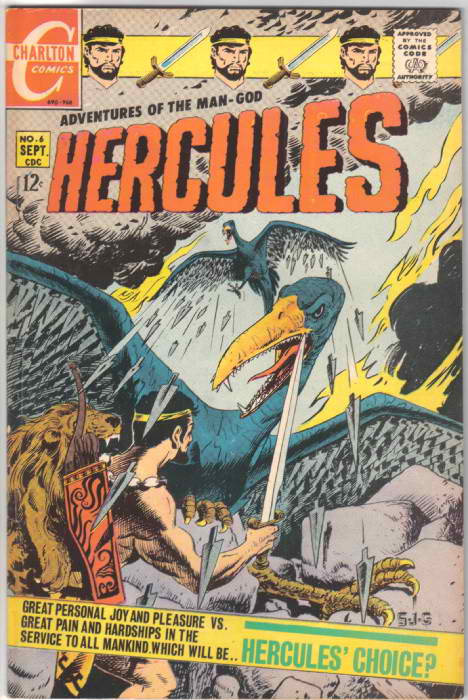 Issue #6, “Hercules’ Choice” begins Joe Gill’s run as writer on the series. Hera finds an ally in Mars, the god of war, who resents Hercules for having aided Alexander the Great in ending the war against the Argives and the Corinthians. Hercules visits his uncle, King Eurystheus, who sets him on the task of destroying Mars’ flock of birds on Arcadia. Hercules knows that fulfilling this task will bring Mars’ wrath upon the Earth, but declining the labor will cost him a chance at gaining immortality. As Hercules soon learns, Mars’ flock is of pteranodons. Hercules succeeds in his seemingly impossible task thanks to the help of Minerva, whom Aphrodite sought for help. Zeus stems Mars’ rage and Hera is left to simmer that Hercules has thwarted her efforts yet again. 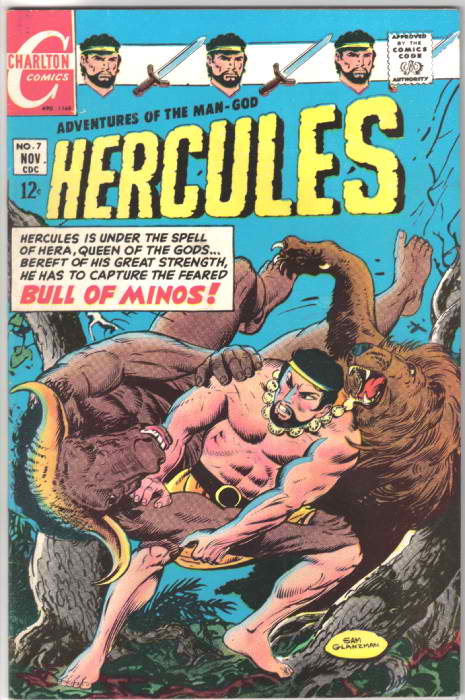 Issue #7, “The Bull of Minos” opens with Hera instructing King Eurystheus to send Hercules to Crete to capture the Bull of Minos. Upon his arrival in Crete, Hercules faces the giant, Antaeus. Word spreads of the man-god’s strength in defeating the giant and King Minos plots to save his prize bull by convincing Hercules that the Minotaur is the bull he seeks. Surprisingly, the Minotaur is portrayed as an intelligent creature capable of speech. Hercules bests the monster and it agrees to take him to Minos’ prized bull. Hercules traps the giant bull and returns it to his uncle (here, referred to as his cousin) and turns it loose upon him. Joe Gill’s scripts are generally inferior to Denny O’Neil’s. Slip-ups such as referring to Zeus and Jupiter or having the characters speak closer to the vernacular of the 1960s are distracting, but this series remains the finest treatment of the fabled Greek strongman in comics history. How Joe Gill and Sam Glanzman took the man-god through his final five labors and beyond will be seen in Part Two.