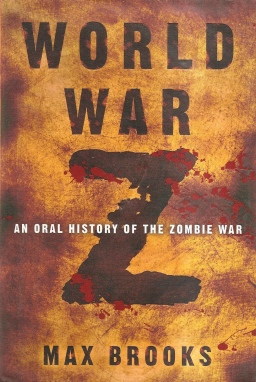 Zombie fans everywhere should be outraged at the hot mess that is the film adaption of Max Brooks’ World War Z. Bringing in a new writer to salvage a script after principal filming surely isn’t a sign of a healthy film, nor is delaying the release date by six months. But that’s apparently what has happened to the project.

For those that aren’t familiar with it, World War Z (the book) is written in the style of Letters from Vietnam or the war documentaries of Ken Burns, as a series of flashbacks told by survivors of the great zombie war. The best part is the multiple perspectives from survivors around the globe, which lend it a high degree of realism while allowing Brooks the opportunity to insert pointed political and social commentary. The zombie plague of World War Z is deliberately left unexplained — it starts in the heart of China, half-hinted as the result of some undescribed industrial waste leak. But beginning with “Patient Zero,” an infected, gray-skinned, 12-year-old-turned zombie, Brooks manages to paint a very convincing picture of how the plague quickly spreads and threatens to overwhelm all of humanity. Brooks has done his research on politics, world economics, plague outbreaks, military tactics and technology, combat fatigue, and climate conditions.  The result feels like history, an event that really happened (or, chillingly, could actually happen).

But the one-sentence description of the film on its IMDB page is a head scratcher:

A U.N. employee is racing against time and fate, as he travels the world trying to stop the outbreak of a deadly Zombie pandemic.

Trying to shoehorn the events of the wide-ranging narrative through one character’s perspective (apparently Brad Pitt) because it conforms to the conservative Hollywood hero formula is the safe bet, but an awful idea. According to the film’s Wikipedia page, the screenplay was written by Babylon 5 and Rising Stars creator J. Michael Straczynski, who identified the challenge in adapting the work as “creating a main character out of a book that reads as a UN Report on the zombie wars”.

Huh? Why is a main character needed? You’ve got a book that’s universally loved; granted changes are always needed to convert page to screen, but why ditch the one element that made World War Z so unique? Why even bother acquiring the rights to the book only to completely rewrite it, top to bottom, save for the obvious reason of cashing in on the name value? The conceit of the “UN report” on the zombie war works in the novel, and works really well. Zombies are red-hot right now and World War Z is the hottest zombie property this side of The Walking Dead. People will pay to see worldwide zombie carnage without a hunky male lead. Or at least I would.