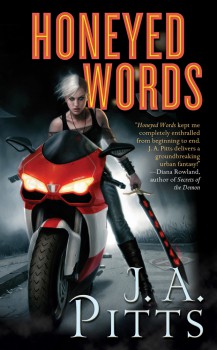 The story didn’t kick start until a little more than halfway through the novel. It starts strong with the singer getting kidnapped. Minus an exciting opening, most of it felt meandering. The installment before Honeyed Words carried a thread of tension throughout the story that feels lost in this novel. When Sarah meets the blacksmith Anezka and a kobold named Bub, the story starts to make a little more sense. Something is very wrong with Anezka’s place, and Anezka starts to act extremely bipolar. How all the small events connected didn’t pull me into the story. The battle scenes are well done, but the action and adventure in the previous installment held more excitement. It didn’t build on a lot of the mythology that is already established in series. The build up to the end just wasn’t there.

Some of the story takes place in Vancouver, and some in the mountains near Seattle. The world around Sarah doesn’t take precedence when it comes to what is happening in her life. As in the novel before, the details in the forges and making things out of metal seem well researched, but I don’t personally know much about making swords, or putting on horse shoes. It is more than enough to make it sound believable. Pitts does a good job with suspending disbelief when it comes to magical things like kobolds, elves and haunted forge. The elves and kobold are new editions to the story. All three were fun characters that were very enjoyable by themselves. I did have a problem with the magical powers of the elves. They can move through mirrors. The elves at times seem very good at opening the mirrors as gateways, and at other times it is hard for them. I also feel that Sarah’s girlfriend Katie was used as a device to spike Sarah’s anger, and pull her through the storyline. This is the second time Katie has been used like this. While Katie might have a few of her own powers budding, for the moment she feels like the perpetual damsel in distress.

Honeyed Words feels like a hodgepodge of events that do not seem related until the end of the novel. The story is not exciting as the first installment, and it didn’t build on much of the mythology in the series. The novel doesn’t expand on what Sarah is, or is becoming, nor does it give us any new information on her magical sword, Gram. Sarah has grown as a character, and this growth is organic to the story. The first installment, Black Blade Blues, is a stronger novel, and I would recommend reading it first before jumping into the series.