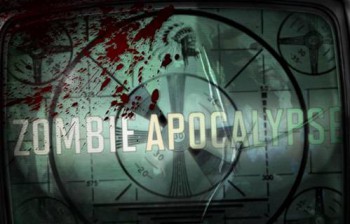 When we here at Goth Chick News predicted that “zombies were the new vampire,” we meant it as an entertainment trend, not a doomsday prophesy. But lately all of us here in the underground bunker are a just a tad bit grateful that our offices are in the bowels of Black Gate headquarters where we could conceivably hole up for several weeks, sustained by a stash of Pop Tarts and Patrone.

Because the reanimated dead are in mainstream news a little more often than we’re comfortable with lately.

Beginning with the horrific face-eating arrest in Miami, followed by several other seemingly subhuman acts, there’s been a flesh-munching wave of terror. We’re not the only ones wondering what’s behind it.

A bona fide zombie apocalypse, however, is not what we should be worried about, at least according to the federal government.

Over the years the Centers for Disease Control and Prevention has released a couple of tongue-in-cheek “zombie warnings,” which are very entertaining, but ultimately just disaster-preparedness stunts. However, earlier this month the agency made it official: Zombies do not exist.

“The CDC does not know of a virus or condition that would reanimate the dead (or one that would present zombie-like symptoms),” wrote agency spokesman David Daigle in an email to The Huffington Post.

Nevertheless, recent incidents in which humans reportedly ate human flesh have the Internet in an uproar, with “zombie apocalypse” being Google’s third most popular search term by June 1st.

Gee Mr. Daigle, are you sure this couldn’t be the result of a third of Americans not washing their hands before leaving the bathroom? 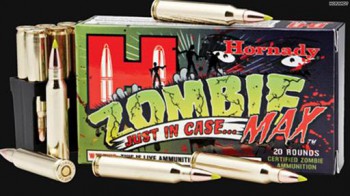 David Daigle went on to dismiss “fictional viruses” like Ataxic Neurodegenrative Satiety Deficiency Syndrome, noting that other triggers have been alleged to cause zombie-like symptoms.

“Films have included radiation as well as mutations of existing conditions such as prions, mad-cow disease, measles, and rabies.”

Of course, that’s exactly what they want you to believe.

Thank goodness for the reliable reporters at CNN who are having none of it. Last week they ran a story about Steve Hornady and his ammunition company Hornady Manufacturing who are marketing a set of its bullets as “specifically designed to vaporize zombie varmints.” The web site states:

Hornady Manufacturing has even created a commercial to market the bullets that are available in a full line of calibers.

After it gained some acceptance among [people], some of us here in the company got on board with the idea and we decided just to have some fun with a marketing plan that would allow us to create some ammunition designed for that … fictional world.

But if reanimated corpses begin dragging their decomposing flesh down the streets of Chicago, I can only point to the fact that it’s an election year and here, at least, they can vote.

How are you preparing for the coming zombie apocalypse (because it’s definitely coming)? Post a comment or if you don’t want to give away all your preparatory secrets, send an email to sue@blackgate.com.