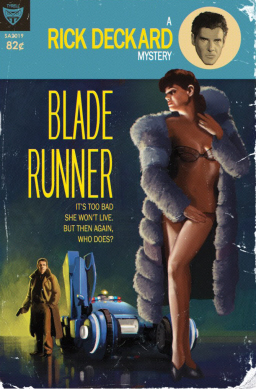 So what’s not to love about Tim Anderson’s re-imaginings of classic SF films as pulp paperbacks?

He’s started working on a personal side project that he hoped would motivate him “into thinking more graphically,” a series of highly detailed period paperback covers for some of the most famous SF films of the 20th Century.

Here’s what he says about his Blade Runner piece at right (click for a bigger version):

If you haven’t guessed by now, I’m a huge sci-fi fan, and a huge fan of Ridley Scott. Here’s a pulp cover I have had in the works off and on for a while now. I was inspired by the detective pulp covers of Robert McGinnis. If ever there was a sci-fi movie that lent itself well to a detective pulp cover, it’s Blade Runner.

Anyone who’s a fan of the great Robert McGinnis is okay by us.

Check out Tim Anderson’s versions of Alien, The Matrix and others here.

I love these, thinking of getting some prints.

Curse you John O’Neill, you stole my Art of the Genre post for next week…

Sorry Scott! This one was too good to keep under my hat.

[…] love us some pulp art! As spotted by Black Gate Magazine, Tim Anderson’s re-imaginings of classic science fiction films as pulp magazine covers. This guy is clearly talented and has a really unique project going on here. You can view more […]