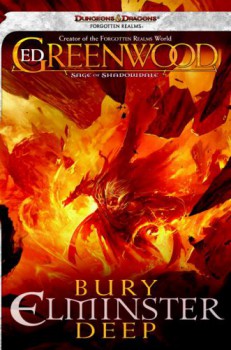 This all sounds like the makings of a great story, right? There is potential for lots of intrigue, the cleverness of heroes, and epic battles. Well, one out of three isn’t horrible is it? To Greenwood’s credit, there is certainly a lot of action in this story. Elminster and friends (including the ghost of the Steel Regent and an out of time Lord of Waterdeep called Mirt) go through encounter after encounter with war wizards, the undead death knight Targrael, minions of the mind-controlling Manshoon and Manshoon himself. Each time, the heroes escape by the skin of their teeth. Many a time, the city and its buildings, including:

The royal palace, the Promenade, and the row of buildings facing the building across the broadest street of Suzail all rocked and swayed. A parapet corbel broke off and plummeted to the cobbles where it shattered, the shards rolling ponderously to various halts.

And that, I think, is the crux of this novel. Though full of epic action, hardly anyone will notice because there is little plot. There is nothing to notice about the narrative because there isn’t one. The heroes stumble from one battle to the next nearly nonstop. The result is exhausting for the reader. The movie-action pace never slows long enough to develop characters or story. The stuffing has fallen out of the teddy bear.

The story, as plotted, goes something like this. Soon after Elminster encounters Mystra, he enters Cormyr to stop Manshoon. Then he and his companions enter the palace. They are attacked by war wizards. Then the leave the palace. Manshoon attacks them. They re-enter the palace. War wizards attack them again so they flee to the streets of Suzail. Targrael and Manshoon attack them seperately. They head back into the palace. War wizards attack them. In between, they have to deal with the jealousy of Arclath for Elminster’s inhabitation of Rune’s body until Elminster does what he should have long ago and provides Arclath a taste of what it feels like to play host to the most powerful archmage in the Realms.

But here is the problem. The entire novel is reactive. Elminster’s company does nothing but react to situations throughout the entire novel. The result is that the story is nothing more than preparation for battle scenes, battle scenes, and the immediate aftermaths which double as preparation for more battle scenes. How many times can Elminster enter the royal palace without getting the picture that he is not going to be successful and needs a new tactic? How often will he return to the streets of Suzail by choice, only to turn right back around and try to enter the palace again? Greenwood’s looping plotting becomes tiring after a time, and the repetitive motion of swinging his stuffed animal by the arm threatens to tear its arm off.

Greenwood has played a little too long and a little too roughly with his best character. Elminster is losing form and therefore losing interest for the reader. Bury Elminster Deep is monotonous and boring. One can only hope that Elminster Enraged will live up to the promise of its title, and the reactive character of this novel will become an active agent. My hope is that Elminster will live up to the Simbul’s charge of restoring the balance of Toril, so egregiously cleaved by the death of Mystra and resulting spellplague.

John Ottinger’s reviews, interviews and articles have appeared in numerous publications, including *Publishers Weekly*, *Black Gate*, *Strange Horizons *, *Electric Velocipede*, *SF Signal*, *Sacramento Book Review*, and * Tor.com*. He can be found pontificating regularly on nothing much at Grasping For the Wind.

My memory may be faulty here, but if I recall correctly (from sooo many years ago) was not Elminster one of the original developers or game-testers of AD&D characters? Every time I see that name, it sparks a memory of reading in an old AD&D book somewhere that Elminster was somebody’s character.

I had to give up on Elminster after “Elminster In Hell.” The one where he spends a quarter of the book as a rock, thinking about stuff that happened in previous books.

I love Greenwood. He created the Forgotten realms, and then rebuilt it a few years ago for a new generation, and did a brilliant job. He’s a great world builder, but his stories read like dungeon crawls.