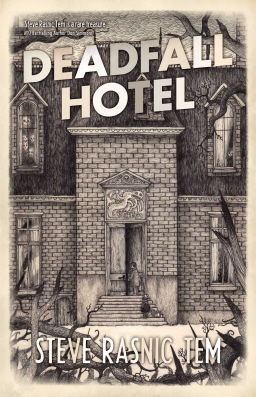 I don’t get to cover horror fiction as often as I like to — mostly because I don’t get to read much these days. So it’s always a delight when a surprise like Deadfall Hotel arrives at my door. The seed of the novel was the acclaimed short story “Bloodwolf,” published by Charles L. Grant in his anthology Shadows 9 back in 1986. For over 25 years author Steve Rasnic Tem has nurtured that seed, and it has finally grown into a complex and original horror novel.

This is the hotel where our nightmares go… It’s where horrors come to be themselves, and the dead pause to rest between worlds. Recently widowed and unemployed, Richard Carter finds a new job, and a new life for him and his daughter Serena, as manager of the mysterious Deadfall Hotel. Jacob Ascher, the caretaker, is there to show Richard the ropes, and to tell him the many rules and traditions, but from the beginning, their new world haunts and transforms them.

It’s a terrible place. As the seasons pass, the supernatural and the sublime become a part of life, as routine as a morning cup of coffee, but it’s not safe, by any means. Deadfall Hotel is where Richard and Serena will rebuild the life that was taken from them… if it doesn’t kill them first.

Weird Fiction Review had this to say about Deadfall Hotel:

The novel provides a smorgasbord of sweet spots for the weird fiction connoisseur. Nightmares, supernatural creatures, cults, eccentric characters, and the atmosphere of the titular hotel all combine for a fascinating read. With the popularity of TV shows like American Horror Story, the timing seems right, as well (although we think Deadfall is much more interesting.)

Horror legend Steve Rasnic Tem returns with Deadfall Hotel, a modern fairytale, haunted house story, vampire novel, cult novel, werewolf novel, zombie story, and just plain old “weird tale”… It’s a masterful hodgepodge of genre tropes and devices that — much like Peter Straub’s magnificent Floating Dragon — in the hands of a lesser writer would have collapsed… Deadfall Hotel is everything a horror novel should be. Steve Rasnic Tem is at the height of his powers with this effort.

Deadfall Hotel is 301 pages in paperback for $9.99. It was published by Solaris on April 17. It is illustrated by Danish artist John Kenn Mortensen, whose creepy, Edward Gory-like style is both classic and richly modern — click on the cover above to get a closer look at his work. WFR.com offers a long self-contained excerpt, “The King of the Cats,” presented in four parts that you can sample here.