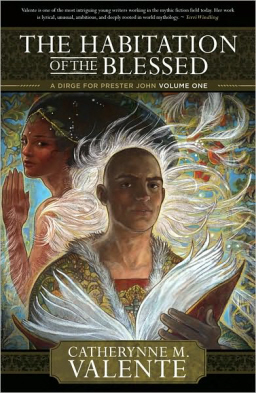 Catherynne M. Valente has announced her third Prester John novel, following The Habitation of the Blessed and The Folded World, will not be published by Night Shade Books. In a statement on her blog last week she said:

I continue to think that Night Shade puts out wonderful books and I hope for their success. I did not take this step lightly. But their recent troubles have made our business relationship difficult, and I could not in good conscience proceed with a third book given the circumstances. Obviously I’m being a bit vague – there’s no point in airing laundry in public… What this means is that at the moment, The Habitation of the Blessed and The Folded World are for the most part unavailable. Some copies will float around for awhile yet, but most of the e-versions are gone. I hope to fix this in the next week – I have relicensed the covers from the excellent Rebecca Guay and Night Shade has been very kind and accommodating with regards to physical copies and digital files…

As for the third and final book in the series, The Spindle of Necessity, I am committed to finding a way to make sure you get to see it. I owe you a finish. Oddly enough, Prester John is my longest series to date, and I want to bring it all to a close the way I planned to from the beginning… Given the market realities, the most likely avenue for this is a Kickstarter campaign to fund a self-published version.

At press time, both The Habitation of the Blessed and The Folded World are available at Barnes & Noble and Amazon.com, in both print and Kindle versions. But if you’re interested in getting copies, you want want to move quickly.

This series by Valente seemed like a GREAT idea to me when I first heard of, grabbed the two parts that could and waited for the last.

I see now it’s in purgatory.

It seems this will be completed sooner than later. By force.

Well how long did people have to wait for that third book in Wolfes’ ‘Soldier’ series?

Any ways I don’t have a habit of snapping up pieces of a ‘new’ series the second it comes to my town, I just ‘knew’ something like this would happen + this was such an awesome idea…

Well, if everyone waited for the third book of a series to come out before buying the first one, every trilogy would fail before the second book arrived. So way to go supporting publishing, my friend.

I don’t think you’ve taken a terrible risk. Cat has a pretty good record of hitting her commitments. She’s one dedicated writer, I can tell you that.

If Glen Cook could finish the Dread Empire series, anything is possible.

Well, being who I am, I vote for self publishing. There’s no reason these days to wait for publisher to show up on a ragged nag. She’s a published writer with an obvious following so she’ll do better than average with the fund raising and the selling and she’ll probably make more money off the third book than off the first two combined. I wish her luck.

[…] there have been omnibus signs for the past several years, including a deep sale last April, authors leaving their stable, and others. Publishers Weekly has more detail on the potential sale here; io9‘s […]