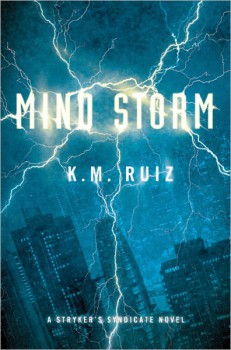 Science fiction is inundated with post-apocalyptic and dystopian settings, super-powers and corrupt governments, with varied results. Mind Storm is a nice blend of the familiar and the new, packed with action, and it introduces some pretty fun new characters. It is the first book of a series of unspecified length.

Mind Storm opens with psions Threnody and Quenton traveling to the slums of Los Angeles. It is the year 2379. Humans have stripped the Earth of nearly all resources. Crowded and afraid, nuclear war was unleashed…everywhere. By the time the war was over, most of the populated areas were dead zones, unfit for human life. The majority of the human race had been wiped out. But a small percentage of the human population finds their DNA altered, leaving them incredibly powerful and unique. They are called psions, and brainwashed and put in service to the world government as soldier-slaves.

Their power comes at a cost, burning out more of their bodies with every use. Only the fortunate make it to the age of thirty five. They are feared and hated by the humans, who regard them as dangerous vermin. Most of them are found early and pulled into the Stryker Syndicate, fitted with kill-switches controlled by the World Court. The ones who escape the Strykers are found and enslaved by the Warhounds, a rogue group of powerful psions serving a shadowy figure.

Threnody and Quinton are in disgrace, sent on an impossible mission. Threnody is a Class III electrokinetic, able to move and alter electrical currents with her mind. Quinton is a Class III pyrokinetic whose power has eaten his hands away so many times he’s outfitted with metal replacements. Their last mission failed catastrophically, and they’ve been assigned a suicide mission: find and capture Lucas, a rogue psion of rare and incredible power. Assisting them are a rare Class II telepath, Kerr, and his partner, Jason, a Class V telekinetic. They are the lowest team in the Strykers, considered liabilities but too valuable to discard.

The Warhounds have beaten them to the target, and in the heat of the moment, the four Strykers face a choice from their target: die, or become part of an effort to thwart a conspiracy by a man who has his fingers in all the pies of the world. Everyone has a secret agenda, and the Strykers are the key that everyone wants.

Mind Storm is half superhero story, half thriller, all fun. The psions are well-thought out and consistently structured, varied enough to be interesting without feeling like ‘flavors of the week’. While comparisons could be made to X-Men, the narrowed scope of the powers gives the author the opportunity to treat each psion in greater detail, without reducing them to a mere vessel for a cool power. Threnody and Jin Li, while both electrokinetics, each have their own personality and strengths, and watching their final battle is just cool. Lucas and Nathan Serca, the two most powerful men in the universe, are shown with unique motivations and fears.

The humans are…very human. Divided into the registered humans, who have access to the few luxuries still available, and the unregistered, impure humans who aren’t even allowed education, they are nonetheless united against the psions.

This is the first book in a series, and it will be interesting to see how the story develops. There are a few places where the decisions feel unfounded or the solutions too easy. Because the author provides such solid settings and motivations in most cases, these weaknesses are highlighted. However, for the most part, Ruiz manages a strong, vibrant, diverse cast with impressive skill. This is definitely worth the read. It ends, however, on a hell of a cliff-hanger. Fortunately, the next one comes out in June of this year!

Jaym Gates started out as a password and formatting-challenged intern at Fantasy Magazine. Since then, she’s edited anthologies on such high-brow topics as zombie erotica, written about mechanical dragons and galaxy-eating horrors, managed fetish shows and blogged all over the place. Hey, she’ll never lack for good stories at conventions. More about this entertaining resume can be found at jaymgates.com.