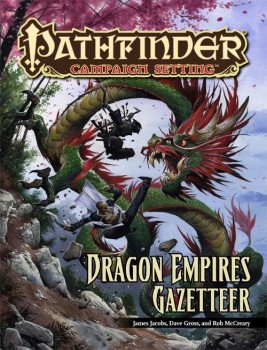 I’m sure I’ve mentioned TSR’s Oriental Adventures on more than one occasion from my soap box of a blog. This book is the only 1E D&D book I have with water damage because the day I bought it I was so enthralled that I thought I could take a bath while reading it [bad idea].

Anyway, from that moment forward I was deathly intrigued by the Orient, be it Kara-Tur in the Forgotten Realms, the T’ung in my home brew world, the non-magic stage of feudal Japan in Bushido, or of course the realms of Rokugan in Legend of the Five Rings.

Three weeks ago, as my six-year old son broke apart a flex pole tent system and began using it as a weapon, I had the pleasure of showing him firsthand what a three piece staff looked like in the Oriental Adventures book, making it also a fine teaching tool as well as a gaming supplement.

Therefore, you can well imagine my unchecked delight to find that Paizo was not only producing two source books for their Pathfinder system concerning the Orient in Golarion, but also a full Adventure Path that dealt with the region.

In this article I’m going to talk a bit about three outstanding products newly released in the past six months from Paizo concerning their Dragon Empires setting.

The first is the Player Companion: Dragon Empires Primer. Now I don’t know how many of you take the time to invest in primers, but I have to say I’ve yet to be disappointed where Paizo is concerned on the worth of these little products. They are gems of concentrated information and cost just a bit over $10, so it’s more than worth the investment. 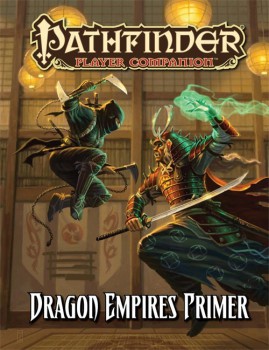 The Dragon Empires Primer gives you a nice overview of all of the Tian Xia nations. You start with a full color map on the inside cover, a must have for understanding exactly where you are dealing with as you start looking for adventure locations. Next you get a little insight into life in the Dragon Empires before having a crash course in some of the races found there [my favorite are the ghost-like Samsarans!].

Full nation descriptions, and a personal favorite, the flags, begin on page 8 and take you through the bulk of this 30 page text. By page 22 you’ve moved into some very interesting archtypes for characters or NPCs inside the Tian Xia, then come everyone’s favorite, the new Feats section and some words on combat. You finish things off with a look at religion and faith, a few deities, and then a nice little section on magic.

If you are looking to take a ship bound for Tian Xia, perhaps just too wet your player’s appetites and see if they might like to stay, The Dragon Empires Primer is the perfect tool. It adds nice content to any DMs collection, gives you a taste for what could be, and fills out your knowledge of the world as a whole.

Now if you are like me and want more, then comes the Pathfinder Campaign Setting: The Dragon Empires Gazetteer. Now I fell in love with the word Gazetteer in 1985 when TSR first produced a fine series of them for their basic world setting, and Paizo continues this fantastic tradition with this incredible product.

It comes in at 63 pages, and just under $20.00. Cover art, Wayne Reynolds, so worth the price of admission right there, but inside Paizo designers James Jacobs, Dave Gross, and Rob McCreary have taken what the Primer promised and put it on some human growth hormones.

The writers take you through their personal inspirations for making this text, then get into a more in depth search of humanity in the Tian Xia. You get language lessons, motivations, conflict, and a seed to the living breathing world that is the Dragon Empires. Another great addition is the section detailing the treatment and interaction with foreigners.

Then comes five full pages of detail concerning new races, the Kitsune getting the most play but why not, I mean they are awesome after all. By page 15 we’ve moved into something I always find icing on the cake for world guides, the section on the calendar and historical timeline.

Like the Primer, the Gazetteer devotes the mass of his volume to the discussion of nations, and you’ll find nearly 20 pages of info, incredible art, and finally a even more detailed and colorful map of the regions by the time you hit page 47. 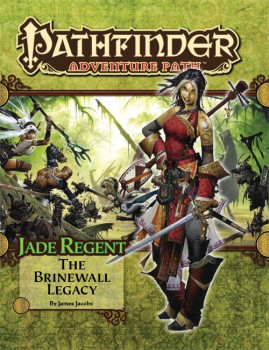 I found the next section concerning national conflicts, birthrights, family, rural living, the spirit world, and city life rich with detail to smooth the edges for a dozen different campaign ideas that could be born within these lands. You also find a great bit on the zodiac!

Finally, the Gazetteer finishes things off with a full section on the divine pantheon of the Tian Xia, the gods whispered about in the Primer coming into full bloom.

With these two volumes you’re set to run any number of adventures within the fabled Tian Xia, but if you’d rather take a page from professional designers on the subject, then go no further than the Pathfinder Adventure Path: Jade Regent.

Beautifully covered by Reynolds, who we haven’t seen on an adventure path since Crimson Throne, this epic six adventure set takes players from the familiar comforts of Sandpoint in The Brinewall Legacy all the way to the lofty dynasties of Tian Xia with the closing chapter of The Empty Throne.

Now I’ve talked enough about Adventure Paths for you all to understand that they are extraordinary, and this one is no different. You know, it reminds me that James Maliszewski from Grognardia mentioned last week that AD&D 1E was known more for its modules than almost anything else, and since that early 80s time modules have become tired and forgotten in every edition of D&D. I agreed with him when I read his words until I remembered full well that modules are not dead, but simply have moved from D&D to Pathfinder.

Like the classics of old, Paizo should be known for these fantastic mosaic adventures, and so as always I highly recommend to anyone interested in realizing a campaign from 1st through 18th level go directly to Paizo’s 55 module back-stock and press the buy button. I guarantee you won’t be disappointed, just as I wasn’t with every single one of these fantastic Orient-inspired supplements!

Until next time, good gaming and may your dice be kind!

[…] Scott Taylor @ Black Gate posted a review this week of the Pathfinder Dragon Empires Gazeteer, the D…. Plenty of oriental setting details and adventures to keep your Oriental Adventures-loving-younger-self happy for a while! […]