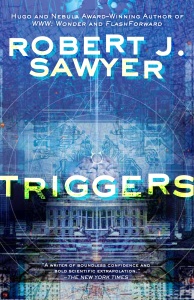 Hugo- and Nebula-award-winning science fiction author Robert J. Sawyer returns with a new hard science fiction novel which pulls together elements of a gripping political thriller with cutting edge psychological insights to create a story that works on many levels. I had the pleasure of getting an advance look at Triggers over the last few months as it was serialized within the pages (digital pages, in my case) of Analog magazine. Triggers has the pacing of an episode of 24 and the philosophical sensibilities of an Isaac Asimov novel, so any readers who were introduced to Sawyer through his television series FlashForward (Amazon, B&N) will find it particularly interesting.

The novel begins in an America gripped by fear, victim of a series of domestic terrorism attacks attacks, administered with devastating explosives by an al Qaeda splinter group. During a speech about these attacks, the President is shot on the steps of Lincoln Memorial. On the brink of death, the President is rushed to a nearby hospital for life-saving emergency surgery.

Elsewhere in the hospital, an experimental procedure attempts to cure an Iraqi veteran of his PTSD.

In the middle of these two procedures, the city is struck by another devastating attack … one that leads to bizarre and unexpected side effects. A number of people within the hospital have become mentally linked, now associated in a chain where each person can access the memories of another person in the chain.

Complications continue to multiply as the President realizes that the terrorist attacks seem to be an inside job and that the key to solving them may lie in his very own memories. Memories that he is currently unable to access.

And, more importantly, memories which some unknown person now has the ability to access … along with all of his knowledge about America’s upcoming response to the terrorist attacks.

Triggers features a complex, multi-faceted, ensemble cast of characters. Most of Sawyer’s previous novels have focused on only a handful of main characters, but the mental link established in this novel affects about 20 different people, about half of whom become viewpoint characters at some point. Though this is a broader cast than he usually tackles, he handles the challenge flawlessly, and each character’s personal situation is unique and significant to the plot.

The political intrigue at the core of the novel is more than enough to draw readers in, but one of Sawyer’s key talents as an author is the ability to weave deep philosophical issues and social commentary into the book. Here are just a handful of the major themes that show up in the stories told in the book:

… and even a romantic sub-plot.

If there is one flaw in the novel, it’s that the final resolution has something of a deus ex machina feeling about it. The book does evolve rapidly in the final chapters, with a major plot twist that is consistent with what come before but which is not strongly foreshadowed, so it seems to come somewhat out of left field. Still, the resolution is completely consistent with what comes before. Without giving away the ending, I guess I’d put it this way:

A novel that seems focused on very mundane, real-world concerns is ultimately resolved in a way that is anything but mundane.

And if that’s the worst flaw in a science fiction novel, it’s one that I can live with.