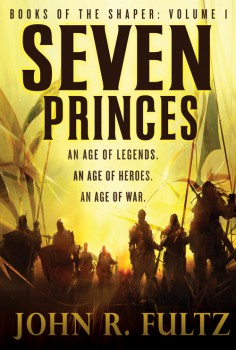 What do you want out of your fantasy? Mythmaking in the mold of JRR Tolkien’s The Silmarillion? Freebooting adventure, decaying civilizations, and heroic swordplay a-la Robert E. Howard? Weird, extraplanar demonic horrors like those encountered in the fiction of HP Lovecraft or Clark Ashton Smith? You get all of this stuff in John Fultz’ gonzo debut novel Seven Princes, both to our benefit and occasionally our detriment.

Seven Princes is bold, brash, and big. This is a novel written with bright strokes of character and setting, bursting with world-shaking adventure, intrigue, and conflict. It reads big, and feels big, and it’s unrepentantly so. In a “Meet the Author” Q&A at the back of the book Fultz describes the influences and raw materials that underlie Seven Princes. These are legion—Lord Dunsany, Howard, Lovecraft, Smith, Tolkien, Tanith Lee, Darrell Schweitzer, and others—so it’s no surprise Seven Princes contains multitudes. But underneath it all is a strong epic fantasy undercurrent, shot through with swords and sorcery. Says Fultz:

A writer’s sensibility is, I think, determined largely by his or her influences… what you’ve read most and where your passions lie. You write what you love. That said, writers like to stretch themselves too. For me, the whole epic/heroic fantasy realm is where I’ve been heading since I began reading fantasy as a kid in the late 1970s. Some have also called my work “sword and sorcery” but nobody can give a solid definition of what that actually is. For me, the bottom line is that I just Do My Thing and let my passion for storytelling lead me where I need to go.

Nobody can say Fultz’ has a limited imagination and with it he weaves a fine story. Seven Princes revolves around the young, displaced prince D’Zan, whose father, King Trimesqua, is cruelly murdered and his throne usurped by the evil sorcerer Elathym. D’Zan wants to reclaim the throne and exact vengeance, but although he has the resolve to do so he’s young, physically weak, and lacks the necessary leadership. But over the course of some trying journeys D’Zan acquires the strength and military alliances to make an attempt. This relatively straightforward plot of revenge and returning a king to his rightful throne is interwoven with the intrigues of a race of Giants. King Vod of the Giants is forced to make amends for a sordid deed from his past, the theft of a great pearl venerated by a race of Sea-Folk which he stole in exchange for the gift of sorcery. When Vod leaves on a seemingly suicidal mission to surrender himself to the Sea-Queen’s justice, his eldest son Fangodrel assumes he will inherit the throne. But when Vod selects his wife Shaira to rule in his stead, Fangodrel revolts, and casts his lot in with evil (Fangodrel is actually the blood-son of a wicked King; his mother Shaira, Vod’s wife was once held in captivity and raped, giving birth to her pale, poetic, and morally bankrupt son).

These intertwining plot strands and broad tapestry of characters make the world of Seven Princes feel large and substantial. There’s a heavy emphasis on color and atmosphere and lots of nods to the fantasy heavyweights of yesteryear. Seven Princes starts with an exciting opening chapter that reads like a cross between a Conan story and Max Brooks’ World War Z, as Elathyn summons a hungry zombie horde that overruns King Trimesqua’s kingdom. Fultz’s passionate race of Giants are Tolkien-esque or perhaps more akin the Olympian Greek gods, a combination of First Age Elves and some wild barbaric northern race. Like Tolkien’s Elves the Giants are dwindling and their race disappearing from the world, but they are still very potent in their power and a formidable force if roused. Other influences are also plain: In one scene Vod’s son Vireon chases a fox-like sorceress through the snow in a four day test of endurance that seems very much like a nod to Howard’s “The Frost Giant’s Daughter”; there’s a reference to drugged slaves on a warship who are chained to the oars until they drop, a device that fans of Michael Moorcock’s Elric series should recognize. And so on.

If these influences weren’t enough, the story of king Vod has definite Arthurian overtones. We later learn that Vod was taken from his parents by the sorcerer Iardu the Shaper and given to a human couple to be raised, very much like Arthur’s spiriting away by Merlin. After Vod departs for the sea and is feared dead, his people still hope for his return, again like Arthur’s promised return from Avalon. There’s also an undercurrent throughout the book of the futility of war, one of the main themes of T.H. White’s novel The Once and Future King.

Fultz is a master of pulling the rug out from under the reader. No characters are safe in Seven Princes, and even “success” comes with a price. One character fulfills his mission in undeath, which results in a rather tempered and hollow victory to say the least.

In short Seven Princes is the product of a fine imagination and skillful homage to many sources. That said, it has some flaws common to first novels. For example, I found at times the dramatic shifts in tone and the sprawling nature of the novel to be a bit jarring; the feeling was like I was reading a series of powerful and inventive but loosely connected short stories rather than a fully realized novel. However, these pieces begin to coalesce in the second half of Seven Princes. The novel hits its stride with the murder of a Giant and the formal declaration of a multi-nation war. Mad chaos ensues. Seven Princes ends with a Ragnarok-esque battle that ended a little too abruptly for my tastes, given the buildup. I would have liked to see a little more coming together of the various plot threads and was hoping for a more settled conclusion. But that will have to come in future volumes, I suppose, as Fultz is planning more books in the series. In the meantime, enjoy the glorious, unrepentantly fun sprawl that is Seven Princes.

[…] – epic fantasy… Seven Princes is as good as it gets.” Here on the blog Brian Murphy said: Seven Princes is bold, brash, and big. This is a novel written with bright strokes of character […]