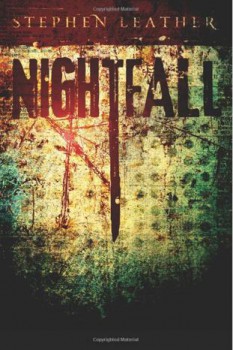 Normally a crime drama, or anything that smells like one, wouldn’t get much of my attention.

It’s nothing personal you understand.  It’s just my concern that any tale of violence and blood-letting that’s too close to real CNN headlines serves more as sociopathic training material than relaxing escapism.

That, and the fact I’m skeeved out rather than entertained by realistic stories depicting man’s inhumanity to man.  Ghosts being mean to man is perfectly fine.

So when our friends over at Wunderkind PR contacted me about Nightfall promising it was “right up my alley,” I wondered if my alley had suddenly detoured from behind a haunted mansion to behind the city crime lab when I wasn’t looking.  I determined to give it no more than a cursory look.

Nightfall’s English author Stephen Leather is the creator of over 20 thrillers which frequently include themes of crime, imprisonment and military service, and lately terrorism: manly pursuits all, but nary a ghost or zombie in sight.

Well to be fair, there was that one from last year, Once Bitten, which had vampires in it… sort of.  But I’m not sure even Leather himself counts it since no mention is made of the book even on the author’s own website.

But because in the past Wunderkind has been the source of new material that I have loved much more often than not, I decided to dig a bit deeper when it arrived.  After all, Nightfall premiered in the US last week, but in the UK it’s only the first in a series of three novels published there in 2009.

Once again, Wunderkind knew exactly what they were doing.

Nightfall introduces a new Stephen Leather hero, Jack Nightingale. Jack’s whole world is turned upside down when he learns he has inherited a huge country mansion from a father he never knew.

Unfortunately the legacy comes with a terrible curse, which is where the Goth-Chick-hook comes in.

This unknown father had sold Jack’s soul to the Devil at birth and Satan will collect his debt at midnight on Jack’s thirty-third birthday (some three weeks away).

Just as Jack is about to dismiss this entire idea as some lunatic joke, his friends and relatives start turning up dead under mysterious circumstances.  In each case the bodies are found with writing near it in blood: “You are going to Hell, Jack Nightingale.”

Knowing that if he does not find a way out, his soul will be damned for eternity, Jack tries to connect the available clues, which include searching for his biological mother and long lost sister.

As Jack begins uncovering spells, prayers and rituals in his father’s priceless library he starts to understand the terrifying deal his father negotiated with the Devil years ago.

The rest of the story Jack’s desperate race to find a way to avoid his final damnation (if he if he can bring himself to believe in such a thing).  I’ve nearly finished it and loathed to put it down even long enough to tell you about it. 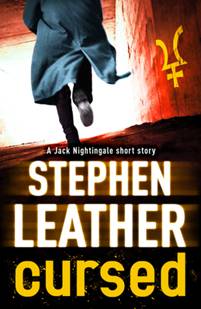 From what I’ve learned this is a  complete change of genre for this author and I wonder whether he is going continue using this new occultism style more in the future.

If so, he has just gained a rabid fan and I may have to send over to the UK to nab the next two books in the series asap.

Beyond the story itself, one of the best things about Nightfall is that Stephen Leather uses seventy-seven chapters to draw the reader into world that combines both suspenseful and supernatural occurrences to tell the story of Jack Nightingale.

However the detail-packed novel capitalizes on an audience of readers whose attention spans are too short to read through long, drawn-out chapters (i.e. me).  Each chapter is no more than seven pages long.

So if you’d like to try Jack Nightingale on for size without committing to the first book, Stephen Leather has written a short story about this character called Cursed which is being given away for free on Amazon as an eBook.

Also, don’t miss the Jack Nightingale website which consists of a fairly impressive game which has you being hunted through a Victorian mansion by a ghoulish apparition or the book trailer created by Stephen Leather’s UK publisher (and you know how much I love trailers).

Okay Wunderkind PR, you can put this one in the “win” column.

Are you already a fan of Stephen Leather’s or will you check out Nightfall?  Post a comment or drop a line to sue@blackgate.com.