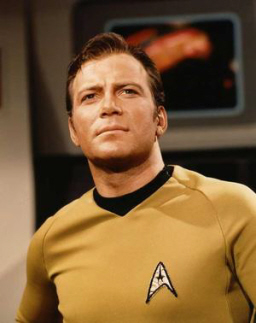 It’s not often I get to use this space to link to Forbes magazine. In fact, let me check real quick… yeah, that’s what I thought. Last time we drew your attention to Forbes, Barry Goldwater was president.

Be that as it may, I feel compelled to alert you to an article posted this week by Alex Knapp, a Forbes staff writer, titled “Five Leadership Lessons From James T. Kirk.”

Yes, that James T. Kirk. Why does the flagship magazine of American capitalism feel the need to draw on the wisdom of the Captain of the Starship Enterprise? Here’s why:

Captain Kirk may have a reputation as a suave ladies man, but don’t let that exterior cool fool you. Kirk’s reputation at the Academy was that of a “walking stack of books,” in the words of his former first officer, Gary Mitchell. And a passion for learning helped him through several missions. Perhaps the best demonstration of this is in the episode “Arena,” where Kirk is forced to fight a Gorn Captain in single combat…

If you think about it, there’s no need for a 23rd Century Starship Captain to know how to mix and prepare gunpowder… But the same drive for knowledge that drove Kirk to the stars also caused him to learn that bit of information, and it paid off several years later.

In the same way, no matter what your organization does, it helps to never stop learning.

Well, nuts. The secret of my success is finally out. At virtually every junction of my life, I simply mumbled “What would Kirk do?” under my breath, and then did that. At least until my wife asked me stop mumbling all the damn time, and to stop putting the moves on every attractive woman I met.

Nonetheless. If you want to know how your life too can be easier, more exciting, and accompanied by a cool jazz soundtrack, your first step is to follow the five leadership lessons refined by Captain Kirk and outlined by Mr. Knapp here.

Soon men in red shirts will be flocking to your side, ready to take a bullet for you. Use them wisely.

Excellent! And this guy knew his Kirk. Loved the article.

Frequently I ask myself, “If Kirk were a science fiction and fantasy writer, what would he do?”

But the answer is always, “He’d be Howard Andrew Jones, of course.”

Two comments, John. First, I can’t wait to hear your rendition of “Rocket Man.” Second, as I recall, Kirk’s foot was trapped under a rock while the Gorn approached. Cut to commercial. Fade back in, and Kirk is limping away from the Gorn. Did Kirk have a tiny vial of gunpowder to blow up the rock, which later gave him the idea for his cannon?