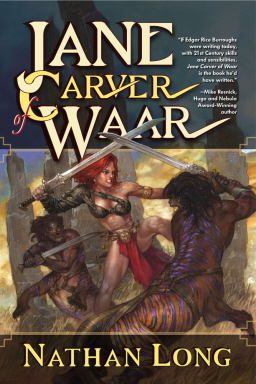 What is Jane Carver of Waar, you ask?

Wake up! Just because bookstores around the country are getting thin on the ground, that’s no excuse for not being on top of the latest trends in fantasy. Where have you been?

It’s all right. Don’t panic, don’t panic.  Just sit back, and we’ll fill you in. That’s what we’re here for.

Jane Carver of Waar is the latest fantasy from hot writer Nathan Long, author of the splendid Ulrika the Vampire and Gotrek & Felix novels, among many others. Here’s the blurb:

Jane Carver is nobody’s idea of a space princess. A hard-ridin’, hard-lovin’ biker chick and ex-Airborne Ranger, Jane is as surprised as anyone else when, on the run from the law, she ducks into the wrong cave at the wrong time — and wakes up butt-naked on an exotic alien planet light-years away from everything she’s ever known. Waar is a savage world of four-armed tiger-men, sky-pirates, slaves, gladiators, and purple-skinned warriors in thrall to a bloodthirsty code of honor and chivalry. Caught up in a disgraced nobleman’s quest to win back the hand of a sexy alien princess, Jane encounters bizarre wonders and dangers unlike anything she ever ran into back home. Then again, Waar has never seen anyone like Jane before… Both a loving tribute and scathing parody of the swashbuckling space fantasies of yore, Jane Carver of Waar introduces an unforgettable new science fiction heroine.

With John Carter of Mars opening this Friday, this book is the perfect way to get you in the mood. Mike Resnick says:

If Edgar Rice Burroughs were writing today, with 21st Century skills and sensibilities, Jane Carver of Waar is the book he’d have written.

Well said, Mike. You can find Jane Carver of Waar at any decent bookstore, or from the finest online merchants. It is published by the splendid Night Shade Press, in trade paperback for $14.99

Blech, gimme a break. You lost me right there.

I hope you’ll give it a real try, Lugo. I read this novel in manuscript and was so impressed I immediately introduced Nathan to my agent.

Nathan is one of the best plotters and adventure writers working today. His Warhammer novels are some of the finest sword-and-sorcery stories I’ve read in recent years, tie-in fiction or mainstream publishers.