This very nearly made me scream like a 14-year-old girl attending a Justin Bieber concert with Robert Pattinson.

Close, but not quite.

Apparently Ridley Scott is engaging in a little viral marketing for his upcoming Alien prequel, Prometheus; “viral” in that he’s trusting people like us to find this stuff and circulate it like the lunatic fan boys / girls we are.

Far be it from me to not live up to Mr. Scott’s expectations, so here it is.

TED is a nonprofit organization devoted to “Ideas Worth Spreading.” It started out (in 1984) as a conference bringing together people from three worlds: Technology, Entertainment, Design (“TED,” get it?).

Since then TED has grown in leaps and bounds. Along with two annual conferences, TED includes the award-winning “TEDTalks” video site, the Open Translation Project and TED Conversations.

At the TED2012 conference which is going on this week in Long Beach, CA the 1,350 person audience was yesterday treated a mind-blowing video conceived and designed by Ridley Scott and created exclusively for the TED2012 audience.

The video features Guy Pearce as Peter Weyland (assumed evil “Company” guy), speaking 10 years earlier than the events in Prometheus. While it’s not a scene from the movie, it does provide an intriguing look into what may lie ahead, as well as important back story information on the epic mythology explored in the movie.

It also provides a timeline for the Alien prequel, dating it in the years 2032/33 (remember, the video takes place 10 years prior to the events in the movie). You can also read an interesting Q&A with Prometheus screenwriter Damon Lindelof here

What is really fun about how TED handled this material after it was presented at the conference is that they treated it as though Peter Weyland was a legit guest speaker.

It was posted on TED’s website along with other conference material from that day including with the background information that they provide on all guests. 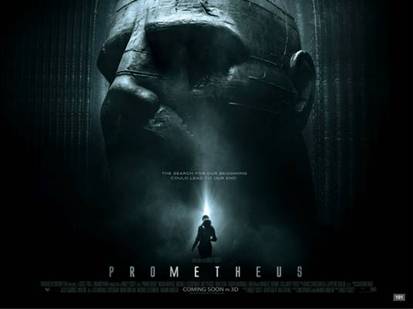 ABOUT THIS TALK: “Peter Weyland has been a magnet for controversy since he announced his intent to build the first convincingly humanoid robotic system by the end of the decade.

Whether challenging the ethical boundaries of medicine with nanotechnology or going toe to toe with the Vatican itself on the issue of gene-therapy sterilization, Sir Peter prides himself on his motto, “If we can, we must.” After a three year media blackout, Weyland has finally emerged to reveal where he’s heading next. Wherever that may be, we will most certainly want to follow.”

ABOUT THIS SPEAKER: “Sir Peter Weyland was born in Mumbai, India at the turn of the Millennium. The progeny of two brilliant parents; His mother, an Oxford Educated Professor of Comparative Mythology, his father, a self-taught software Engineer, it was clear from an early age that Sir Peter’s capabilities would only be eclipsed by his ambition to realize them. By the age of fourteen, he had already registered a dozen patents in a wide range of fields from biotech to robotics, but it would be his dynamic break-throughs in generating synthetic atmosphere above the polar ice cap that gained him worldwide recognition and spawned an empire.

In less than a decade, Weyland Corporation became a worldwide leader in emerging technologies and launched the first privatized industrial mission to leave the planet Earth. “There are other worlds than this one,” Sir Peter boldly declared, “And if there is no air to breathe, we will simply have to make it.”” 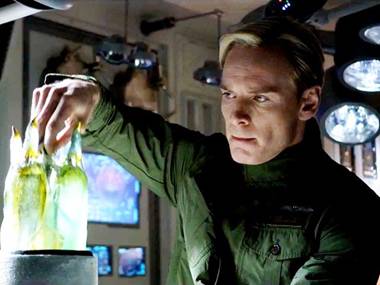 According to Scott, the plot of Prometheus was inspired by academic Erich von Däniken’s writings about ancient astronauts:

Both NASA and the Vatican agree that it is almost mathematically impossible that we can be where we are today, without there being a little help along the way. That’s what we’re looking at: we are talking about gods and engineers, engineers of space. Were the Aliens designed as a form of biological warfare, or biology that would go in and clean up a planet?

In theaters June 8, the trailer alone may be able to (barely) hold you over.

Are you looking forward to Prometheus and how do you feel about Ridley Scott revisiting the Alien franchise? IMDB states that Scott decided against featuring Xenomorphs (the titular Alien of the franchise) in the film, because “one’s now in Disneyland, and no way am I going back there.” So post a comment or email sue@blackgate.com.