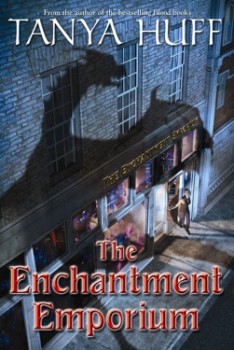 Canadian writer Tanya Huff has well-established credentials in the speculative fiction world, having written a number of respected novels, spanning the range from traditional epic fantasy, to contemporary fantasy, to full-on science fiction. Certain common themes tend to appear in her work, though handled gracefully and without detracting from the story. Ms. Huff’s work commonly challenges any cultural bias toward inequality – whether among races, genders, or for any other reason – and questions the validity of sexual inhibitions, while never denying the real and powerful impact that love imposes.

In the Gale family, “charming” preserves its original meaning, as the Gales still follow the old ways of the Goddess and the Wild God. Twenty-four year old Allie Gale grew up learning how to cast charms and mix potions, taking her place in the third circle among her many cousins, and trying to avoid crossing the Aunties – because Gale power grows as you age, and the oldest generation of women together possess the power to change the world. But magic still can’t give you purpose, and Allie is back home trying to figure out what to do with her heart and her life after losing her job as a research assistant at the Ontario Museum and still struggling to get over her gay ex-boyfriend. When Allie’s wild grandmother, the one Gale Auntie that lives apart from the family, doesn’t come home for the May Day ritual, Allie’s restlessness grows. The next day comes word that Allie’s Gran has died and left Allie an esoteric little store in Calgary. The Aunties don’t really believe their sister is dead, but they send Allie off anyway to figure out what her Gran is up to.

When Allie gets to Calgary, she is quickly drawn into a web of mysteries that starts with her Gran and ends with the numerous Fey living in the area. Allie has not quite got the Gale aloofness down yet, and she immediately starts meddling. She adopts a leprechaun as a shop assistant, an assassin as a potential boyfriend, her cousin as a roommate, and Calgary as her territory. When someone starts opening gates and letting monsters through, Allie gets curious – and a curious Gale is a dangerous one. Throw in a desperate sorcerer, a dozen dragons, and the impending arrival of the dragon queen, and the situation is starting to look pretty dicey. It might be time to call in the Aunties, but Allie wants to handle things on her own. She cannot help but meddle, though, and when she takes the young son of the dragon queen under her protection, all hell prepares to break loose in Calgary. But Allie has always had the potential to be more than just another Gale girl, and she has claimed Calgary as her own.

In one sense, The Enchantment Emporium is an interesting coming of age tale, with a magic system that is clearly reminiscent of historical magical practices, though with the very real difference of actually working – at least as long as you are a Gale. Allie’s struggles with getting over her first love, breaking free from the control of her family, and figuring out her place in the world will resonate with any reader. On the other hand, the structure and powers of the Gale family produce some unfamiliar situations. The Gales produce far more girls than boys in each generation, but they like to keep the power in the family. Add to that that Gale girls are drawn to power, and Gale boys are territorial, and you get some unusual romantic pressures. On top of which both genders of Gales are driven to use sex as a way of sublimating and grounding summoned power. The result is a very unrestrained view of sex – and an almost complete decoupling of sex from romantic love, which on the other hand is really important because it is the primary driver that makes a Gale girl’s power grow. In some respects, The Enchantment Emporium reminds me of Heinlein’s Stranger in a Strange Land. There is nothing salacious in the book, no sex scenes at all, much less anything graphic. But in every moment it seems like someone has just had sex, is thinking about it, or is heading directly toward it. It is a fact of life for the Gales, and is treated with the same casual acceptance as eating, breathing, and sleeping – necessarily frequent, often pleasant, and not something to get all stressed over. As with Stranger in a Strange Land, however, this casual acceptance of sex is somewhat deceptive. In Heinlein’s novel, sex is an important communication and communion between two people; in The Enchantment Emporium sex is a medium for power exchange. As a Gale, Allie isn’t really afraid of much, so it is ironic that the situations which she finds most threatening seem to occur when she is aroused by the power of the individual she is confronting.

The Enchantment Emporium is well written and well paced. While there was never a point at which I felt like Allie was genuinely at risk, the book was never boring. Allie’s most difficult struggle was not with the magical opponents she faced, but with the family she loved and her own self-image. She is also quite likeable, and I enjoyed the quirky circle of friends and family Allie developed through the novel. At the end I cheered her on for becoming her own woman and creating her own place in the world. Huff’s development of the overtly sexual nature of the Gales was typically graceful, even handling the frequent references to same-sex interactions with a casual flair that eliminated any possibility of offending the reader. Nonetheless, I found myself repeatedly confronting my own culturally induced attitudes about appropriate sexual behavior – as I suspect Huff intended. For the reader who enjoys contemporary magical fantasy, The Enchantment Emporium can provide a fun afternoon or two – but be aware, some self-knowledge may result.

I love Tanya Huff’s books 🙂 Thanks for pointing out the new book. I’ll need to keep an eye out.