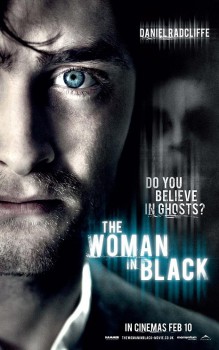 Watching The Woman in Black was the first time in my life that I got to see a Hammer Horror movie first run in a theater. That is just kind of totally amazing. Hammer Film Productions is responsible for nearly half of the horror movies I would list as my favorites, and just the name of the studio summons up delicious visions of Gothic wonder the likes of which live in a distant realm, a dream-state, along with the great Universal monster classics.

Hammer was a studio of the past: it released its last horror film, To the Devil, A Daughter, in 1976, and its final theatrical film, a re-make of The Lady Vanishes, in 1979. But Hammer resurrected itself as a working production company in 2007, and with The Woman in Black it returns to the genre that made it famous: Gothic Victorian horror.

The giants walk the Earth once more!

This isn’t the second coming of Terence Fisher, and nothing that director James Watkins puts on screen can stand up to the great Peter Cushing and Christopher Lee movies, but The Woman in Black is charmingly old-fashioned in its horror approach, and for much of its running time it feels like a Hammer movie, even if the visual palate is far more monochrome and subdued. The story, based on a popular 1983 novel by Susan Hill that inspired a long-running stage play and a 1989 TV movie, is standard ghost story material, but the familiarity of it sparks a cozy feeling. Lovers of traditional horror will find much to enjoy, as will viewers with an appreciation for “quiet” horror and gradual pacing.

The movie also proves that Daniel Radcliffe will have a good career post-Harry Potter.

I’ll talk about Radcliffe first, because for viewers who know nothing about the Hammer Horror legacy — i.e., the majority of the viewers — the young actor is what they’ll pay the most attention to. And Radcliffe is fantastic in the movie. It was a savvy move on his part to take this sort of role as his first cinematic trip away from the enormous legacy of Hogwarts: it puts him in a different genre, but one that doesn’t brashly depart from the pseudo-Victorian world of the Harry Potter films. Radcliffe looks right at home on the set of a Victorian haunted mansion. 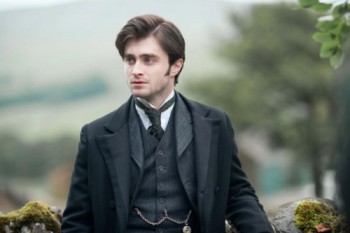 The actor is playing a character who seems, on the surface, far too old for him: a widower with a four-year-old child. But never at any point in the movie did I doubt that Radcliffe was a lost, lonely man with a heavy pain hovering over him. He ages ten years before the camera, and the way the actor plays the twitches, the fear, and the pain of the character is remarkable. Even more impressive is that for at least a twenty-five-minute stretch — the film’s central fright sequence — Daniel Radcliffe is the only character on screen, and has almost no dialogue. Radcliffe nails it here. There’s some excellent special effects rippling through the action and a superb use of sound to pulverize the audience (that is one loud rocking chair), but without Radcliffe’s expressions and his complete investment in the moment, nothing about the scene would work. It would be an utter bore.

Radcliffe plays Arthur Kipps, a solicitor whose position at his firm is tenuous. The firm sends him to the village of Crythin Gifford to look over the estate of the recently deceased Alice Drablow. Kipps is reluctant to leave behind his young son, but since his job rests on bringing a satisfactory conclusion to the case, he leaves his son with a nanny in London and takes the train to town in the Northeast.

Here’s where the classic elements of Gothic horror appear in full force: the town is spooky, filled with weird, furtive locals who give the newcomer among them a cold welcome and don’t want him messing around with the gloomy mansion on the hill with the nasty past. Is there a scene where Kipps arrives at a drab inn where the proprietor tries to get him to leave and go home? Of course there is! I’m not complaining; I would be disappointed if this didn’t happen.

Kipps makes only one friend in the village, Sam Daily (Ciarán Hinds), a rational man whose wife (Janet McTeer) flirts with madness because of the death of their son ten years ago.

In fact, it seems that the entire village has a troubled history of child deaths — and one of them involves the case Kipps is working on. Alice Drablow’s son drowned in a bog around the mansion, and his body was never recovered. As Kipps peers deeper into the history of Alice Drablow and Eel Marsh Mansion, a manifestation of a woman dressed in funereal black begins to appear around the mansion . . . and when the locals learn about it, they go from hostile to near-homicidal toward Mr. Kipps. 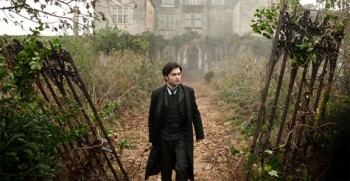 The Woman in Black contains numerous jump scares, both fake-outs and legitimate, but it earns most of its horror through atmosphere. The village of Crythin Gifford and the crumbling Eel Marsh Mansion are delightfully decrepit and horrid locales. The scenes around Eel Marsh are where the movie comes the closest to the feeling of a 1960s Hammer movie: there is one shot of Daniel Radcliffe walking between battered iron gates that looks like it was shot on the old soundstage at Bray, where the classic Hammer Horrors were filmed. The resemblance was so uncanny that I thought Peter Cushing was about to walk into the shot to tell Daniel Radcliffe that he best not go any further, for he knows not what he faces.

Some contemporary horror elements get into The Woman in Black, principally the lingering influence of J-Horror. The ghost appearances are the standard corpse-white faces, and there’s a preponderance of dead children popping up as well. (This is a “kid-kill” movie, but a pretty darn pleasant one.) The plot — which differs substantially from the novel and stage play — follows almost the exact same beats as The Ring, particularly in the extended finale.

And that finale is the one place where the film makes an egregious mistake: after hitting the viewers with an appropriate close that delivers what people would most like to see given the movie’s tone, the story takes one step too far and turns maudlin. Nothing in The Woman in Black is sticky-sweet or overly sentimental until this moment, and it doesn’t feel right. It seems like something tacked on to give a grim movie a touch of uplift that it doesn’t merit or need.

But this is the only major flaw in the movie. Otherwise, it is a pleasing slow-burn of Gothic entertainment with an excellent central performance. The Woman in Black is not stunning, it won’t turn into a classic, most viewers will get more out of it watching it at home . . . but it’s the right horror flick for the moment, and it leaves me hoping to see more of this style from Hammer in the future.

Ryan, are you saying the film has a happy ending?
The novella upon which it is based, a bravura modern attempt to recreate the power and atmosphere of the classic English ghost story, ends on a stunningly bleak note.

Chris, the movie departs from the novel so significantly before the ending that there isn’t much comparison. This ending is similar in tone to what occurs in the novel, but the circumstances are different.

For anybody who is curious and doesn’t mind spoilers, here’s a good article discussing the ending and why it’s problematic.

I read this book last October in prep of the movie coming out. I liked it all right, but have a feeling I’ll enjoy the film even more. This was a good review. Likely I’ll be scared to death and have to watch it with my fingers in my ears.

Well, that did it for me. I HAVE to see this…

Yes, you really must see this movie.

I just returned from seeing it myself, and will say it’s the best “scary” movie I have seen in a while.

Almost all atmospherics; no need for any gore, nor killer(s) lurking around the fringes, picking people off.

Bumps and jumps, as you say, but most done exceedingly well, with only the red herrings really feeling gratuitous.

Heh … and there’s this one scare … you see it coming … you know it is coming … and it startles the heck out of you anyway.

Out here, the movies are pretty much all the teens and tweens have to do on weekend nights, and I’ve not gone to see a movie on a Saturday night in ages.

But it was great fun hearing the young girls shrieking in their seats, sometimes just at the mere appearance of the titular woman.

And I thought Daniel Radcliffe was excellent. I notice when actors are the sole players on stage for very long stretches, and will agree that he played the role masterfully.

And it’s good to hear that Hammer is trying to get back into things.

I grew up on Hammer films, spending a good many Friday and Saturday nights hunkered down in the back seat of an Impala wagon, eating pizza cheese burgers and hiding my eyes.

I didn’t hide my eyes tonight, but there were a couple of times that I wanted to.