Karl Edward Wagner was a man fascinated with monsters and, by most accounts, tormented by an overwhelming host of personal demons. A bearded and brawny hard-drinking Southerner who typed with two fingers like his childhood idol Robert E. Howard, he is perhaps best known for his iconic sword-and-sorcery character, Kane: a red-haired, black-hearted warrior whose love of battle and lust for knowledge combine into one all-consuming will to power. Wagner himself was an unlikely combination of savage and savant, his rough outlaw biker exterior sheltering a deep love for tales of imagination and wonder. At one time a practicing psychiatrist pursuing a doctorate in microbiology, he left that field for a writer’s life. He went on to edit numerous anthologies (including DAW’s The Year’s Best Horror from 1980 to 1994), co-found his own short-lived press, and pen several novels and collections. Most of Wagner’s original work is currently out-of-print. Centipede Press is releasing two hardcover collections of his short horror fiction this year. Hopefully, this will re-kindle interest in the man’s work, making it more available (and more affordable) for those who wish to read it.

I was first introduced to Karl Edward Wagner’s work through his R.E. Howard pastiche, Conan: The Road of Kings, a ripping good tale any fan of the barbarian hero should read. From this I moved onto the Kane material, tracked down in musty used bookstores or acquired through well-placed eBay sniping. Over the holidays I managed to find one of his horror collections stuffed into a shop’s bottom shelf. It is Wagner’s first horror collection, In a Lonely Place, and through it I discovered yet another impressive facet of the late author.

In a Lonely Place offers cosmic weirdness, prowling monsters, strange sex, and abundant death. Like many genre collections, especially early-career ones, it is wildly uneven: one story may have you rolling your eyes but the next will drop your jaw. At his best, Wagner expertly limns a realistic setting with authentic characters before shaking it up like a snow globe to awaken a terrifying storm. The author’s affection for the pulpy fictions of his upbringing bursts from the pages. Robert Chambers’ The King in Yellow, a Necronomicon-like tome called the Book of the Elders by Alorri-Zrokros (also seen in the Kane novels), Lugosi’s Island of Lost Souls, “The Shadow” radio programs, Hammer Horror films, Weird Tales, and other genre icons all make appearances. Thankfully, there is no wink-and-nudge intertexuality here; Wagner loves his influences enough to grant them a sincere approach.

The first story in the collection, “In the Pines,” is also the earliest, and it positively aches with the weight of its unfulfilled potential. A domestic couple trying to overcome a recent tragedy relocates to an out-of-the-way cabin, where both a malevolent ghost and their own personal torments haunt them. The influence of each steadily increases until an inevitable climax arrives. It’s a by-the-numbers contemporary ghost story, but its conventionality is not what undermines it. The setting, a near-abandoned resort of cabins in the Smoky Mountains, is an eerie and well-drawn one. Wagner’s gift for creating atmosphere through place is perhaps his greatest talent but the story quickly finds itself on rails like a funhouse ride, leading to a conclusion that feels a bit forced and very expected. It’s a strange choice to place as the opening of the collection, a bit of grime covering the true gems. Not all the book’s tales are noteworthy, but the successful ones are a rattling joy. 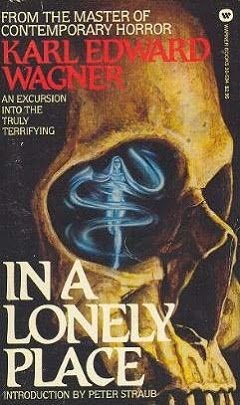 In a Lonely Place has four fine stories, two of which are exceptional. On the secondary rung are “.220 Swift” and “Where the Summer Ends,” both modern creature-horror tales featuring legions of small humanoids with an abiding hatred of humankind. “Where the Summer Ends” takes place Knoxville, Tennessee, a run-down and relentlessly sunny locale whose creeping, omnipresent kudzu vines contain a gathering threat. “.220 Swift” follows archeologists poking about Appalachian mountains in search of lost Spanish mines, leading to a claustrophobic subterranean journey that brings an ancient horror to the surface. Despite the literal monsters lurking in these tales, their unease comes largely from the sense of dread conveyed though scenes of regular people surrounded by awful forces neither they nor the reader will witness until doom is inescapable. (Okay, it’s perhaps a stretch to call the albino folklorist-hitman of “.220 Swift” a “regular person,” but he’s an oddity for a reason.) Both tales give a straight-faced telling of the absurd, and the final moments of both are surreal and creepily delightful.

The real accomplishments of In a Lonely Place are “Sticks” and “The River of Night’s Dreaming.” The first tells of a hiking artist who encounters strange, nonsensical stick-totems deep in the woods that lead him to an undead horror he narrowly escapes. Haunted by the memory, as well by his service in World War II, he later becomes a disturbed pulp illustrator whose work is too unsettling for his own clients. When he gets an offer to illustrate a collection of a mostly-forgotten cult horror writer, the stick-totems creep into the pictures, and stories themselves begin to take on a new and terrifying life. “The River of Night’s Dreaming” defies easy summation. Reincarnation, psychic vampirism, sexual domination, and the interplay between places real and imagined weave together to create a shocking portrait of a woman powerless to direct or escape her dreams, trapped in prisons within prisons. These two stories are deeply effective and merit repeat readings.

In a Lonely Place stands as a fine testament to a writer once considered a titan of his genre, now overlooked by current audiences. Fans of grim, bloody fantasy should still revel in Kane’s adventures, and any weird horror aficionado’s education is incomplete without the dark dreams of Karl Edward Wagner. Here’s to hoping that though the author has passed on his work will not be forgotten.

[…] few words on Karl Edward Wagner, an often overlooked pulp master, are up on Black Gate. Like this:LikeBe the first to like this post. This entry was posted in Uncategorized. Bookmark […]

I have the two TOR KEW horror collections, but they are beat up and I will be getting the Centipedes.

“.220 Swift” was reprinted a few years ago in ‘The Mammoth Book of Monsters.’

“Sticks” often features in Cthulhu Mythos anthologies, and rightly so.

I’ve heard some opine that as good as Kane tales might have been, KEW truly excelled at horror stories.

I am really looking forward to reading more of his horror.

I think you honed your critical scalpel to an overly fine edge here. It cuts where it should not.

Even the least of the tales in this collection shows a level of craft rarely encountered in modern macabre fiction. In The Pines, for all that it is an early story, is saturated with atmosphere and features several chilling moments few readers will forget. Characterizing it as ‘grime’ is unjust.

In a Lonely Place collects some of the finest examples of short horror we have seen since the heyday of the pulps. Sure, some of the stories are better than others, but the collection as a whole is nothing less than a landmark in the field.

Paul- You and I both will be getting those collections, I think. I’m looking forward to them for sure.

John- Ha! Perhaps “grime” is a bit harsh. Maybe “dust” or “cobwebs.” Atmospherically it is strong, but I felt there were too many other shortcomings in the tale for me to be moved by it. Honestly, not all the stories were to my liking, but overall the collection is an excellent one. I don’t care to dismantle the less effective stories in a book I enjoyed by an author of whom I’m a fan. Four highly memorable stories, with two amazing ones, is quite a pleasure to discover in a single collection. I would recommend it to anyone.

Glad to hear about the reprints, Wagner is shamefully out-of-print across the board it seems.

This is great, Mister Hyatt! I’ve been so out of the loop, I didn’t even know this post was going up! COOL!!!

I am a huge fan of “Sticks,” have read almost nothing else by KEW, as his work is so hard to find. Thanks for this.

Thanks for the review, it’s awesome when a previously unknown (to me) weird writer bubbles to the surface. You didn’t mention what makes KEW writing distinctive, though. I understand he is a great part of the pantheon of weird fiction, but what in his style stands apart?

Black Gate » Blog Archive » The Weird Horror of Karl Edward Wagner, Part 2: Why Not You and I

[…] upon abominations lurking in warped dimensions or monsters gathering in subterranean underworlds. In a Lonely Place, his first collection, deals primarily with threats from beyond and from beneath: dark forces […]