i tried to read this series around 20 years ago but didnt get into it t the time, been meaning to go back, so maybe this will give me the inspiraton to do so.

my favorite Zelazny is this weird space ship car racing trilogy, and i’m not sure he even wrote it but i remember his name attached to it.

Roger Zelazny’s Alien Speedway! Bantam Spectra published three books in the series in 1987-88. Zelazny wrote the outline, and the novels were by Jeffrey A. Carver and Thomas Wylde:

Zealzny’s original outline was eventually published in 2009 in Nine Black Doves, Volume 5 of The Collected Stories Of Roger Zelazny from NESFA Press.

I don’t know much about them, so I’m delighted to hear that you enjoyed them. Which ones did you read? 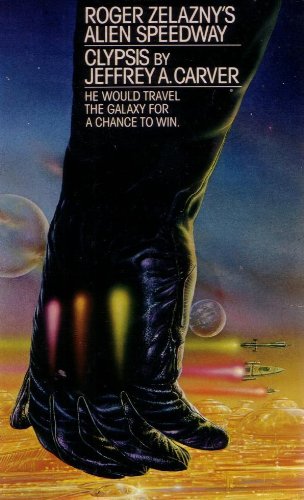 ah yes those are it, i read the whole trilogy but that was probly year after they came out so it;s been 30 years. i am not sure if they skewed young adult or not, i would have been around 13 or so, but i remember them being great.

i should see if they have digital versions (edit: they do, picked up the first book) and read again, find out what 30 years did to my taste in books, hahaha then after i can try the amber books again, though i would wait till after the show that way i dont compare what they left out to much while watching.

I’m often very leery of re-reading books I loved in my teen years (I found Foundation nearly unreadable when I tried it in my 30s, for example). But overall I’ve found that I had pretty good taste for a young reader.

Well… either that, or I continue to have bad taste. 🙂

I’ll believe it when I actually see it on my television; but in the meantime, I’ll keep my fingers crossed that it actually happens and that it ultimately turns out to be watchable.