My Life as A White Trash Zombie 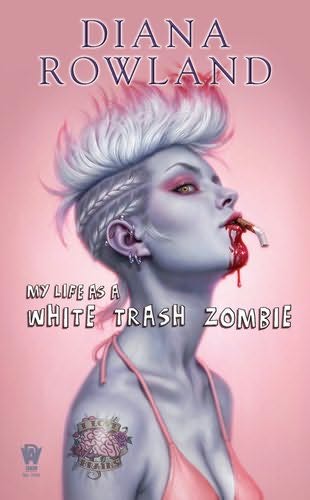 Angel Crawford is a pill-popping, self-described loser who’s found naked on Old Bayou Road after an overdose, only when she wakes up in the hospital…something’s not quite right.

She never used to waft of rot.

If it wasn’t trouble enough that Angel is slowly starting to smell more and more like a pile of dead cats soaked in sewage on a hot summer day, well, she has a new job. Ok, so it’s not like Burger Bayou was taking her places, but really, who wants to work in a morgue? Angel never did, but a mysterious note informs her that if she doesn’t take the job and keep it for at least one month, she’ll go to jail. Sure, it’s delivering dead bodies and assisting in autopsies, but you don’t get paid for normal rehab. Angel takes the gig.

Soon after, fingers skull-deep during an autopsy, Angel realizes that she wants to eat brains. Justifiably, she flips. It doesn’t help when she finds another note on her windshield that reads If you crave it, eat it.

To make matters worse, somebody starts killing off all the zombies around town.

This is not your average zombie novel and it might piss off horror purists who like their monsters in predictable niches. Angel doesn’t shamble. She isn’t dull-witted. She’s not a gorehound. In fact, it’s questionable if she is even a monster. She’s a woman who’s had a lot of bad breaks in life, the most recent of which was being turned into a zombie who has to drink brain smoothies to keep from decomposing. Some folks might contend that Diana Rowland’s zombies aren’t zombies. They might be right. Angel is closer to a vampire than not, only instead of blood healing her, it’s dead people’s brains. What does it matter, as long as the story catches you?

Amidst the brain saws, busted heads and maggots, there’s the introspective story of Angel Crawford, high school drop-out and general ef-up, finally getting on a stable path. It’s not action-heavy. There are no zombie hordes. Only a woman fighting her way through everyday life, which includes a past filled with drugs, the wrong man, an alcoholic father and a mentally ill mother. It’s a humorous, light-gore novel that you could probably get away with recommending to any of your friends that like both Jodi Picoult and C.S.I. Similarly, if you dig books from a zombie’s point of view, like Breathers or Warm Bodies, you’ve got a good chance of enjoying My Life as A White Trash Zombie.

I give it two out of three brains. And seriously, the cover is AWESOME. Now that’s a le freakin’ sexy zombie.

So cute!!! You will have to teach me that!

Thanks, Templeton. It looks GREAT!