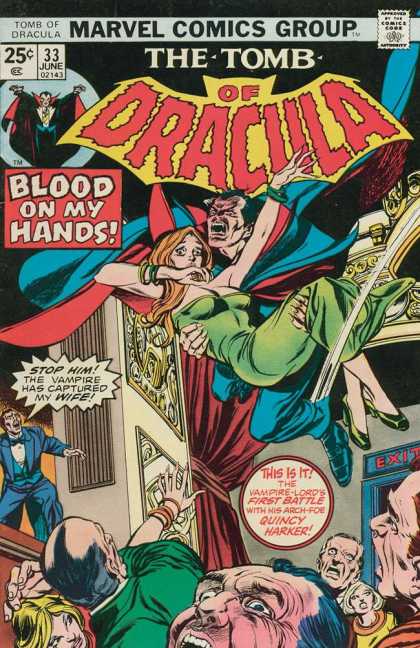 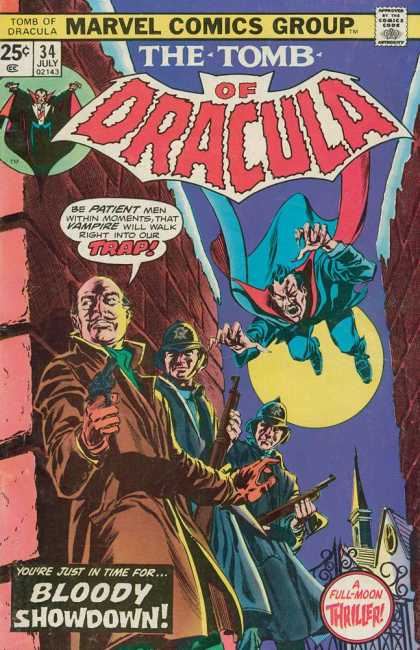 The Tomb of Dracula #33, “Blood On My Hands” starts off with aged, blind wheelchair-bound Quincy Harker facing his greatest dilemma: if he lets Dracula die as the vampire deserves, then he forfeits the life of Rachel Van Helsing, held captive across town by Dracula’s brides. Quincy is tormented by the memory of his daughter Edith. He thinks back thirty years to the night Dracula abducted his wife and flung Quincy from his balcony seat at the opera leaving him crippled by the fall. Quincy’s wife survived another decade after Dracula’s attack, but never fully recovered. Faced with the tragedy of his life, Quincy spares Dracula to save Rachel. In gratitude, Dracula grasps the urn containing Edith’s remains and scatters them across the room, literally throwing her ashes in her father’s face. Leaving the reader feeling nothing but contempt for Dracula at his cruelest, writer Marv Wolfman shifts the setting to India where Taj Nital and his wife stand by their son’s grave. The pain of two grieving parents has reunited them. The issue rapidly picks up speed again as Dracula realizes Dr. Sun is the person who must have poisoned him and sets out to find him. Meantime, Inspector Chelm is on Dracula’s tail while the reader learns that the mysterious white-haired vampire sought by both Blade and Hannibal King is also seeking Dracula. Gene Colan’s artwork maintains the high level readers had come to expect as he and Marv Wolfman deliver another excellent issue that keeps the suspense raised as the storylines appear to be headed toward another major development.

Issue #34, “Showdown of Blood” sees the action shift to Brazil where Guest Star Brother Voodoo saves Frank Drake from the zombies. While in London, Inspector Chelm and his men bungle their attempt to slay Dracula. The reader learns that the mysterious white-haired vampire has been stalking Dracula for some time. A final interlude in India sees Taj make a bittersweet departure from the series as he writes a letter to Rachel Van Helsing explaining he will not return to London. Rachel rejoins Quincy, eager to hunt Dracula down. Wolfman then introduces us to embittered fashion designer, Daphne Von Wilkinson who encounters a weakened Dracula and begins providing him with the fresh blood he needs in the form of her enemies. 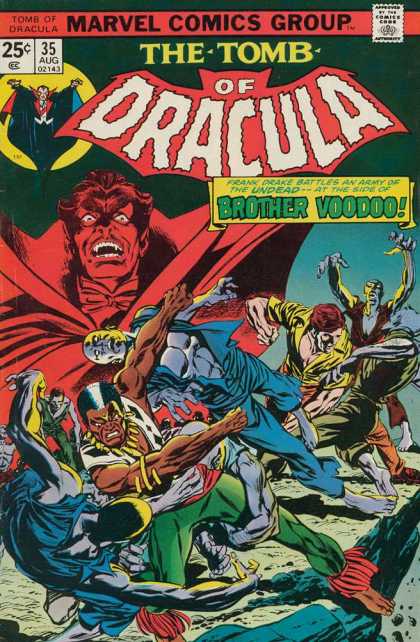 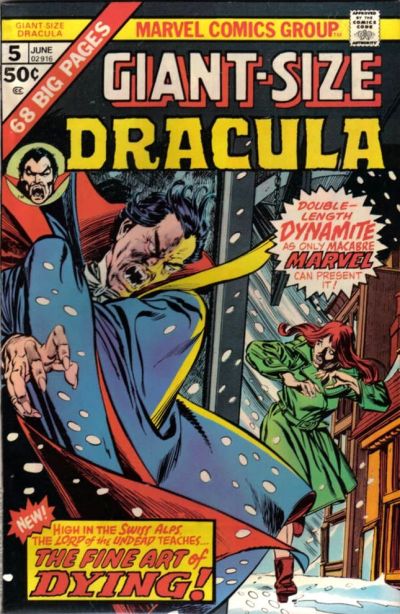 Issue #35, “Hell Hath No Fury” sees Daphne Von Wilkinson barter with Dracula. She will locate Dr. Sun using her fashion model contacts if he kills four of her enemies. The setting shifts to Brazil where Brother Voodoo and Frank Drake fight their way out of the army of zombies and determine to find Danny Summer. Dracula kills each of Daphne’s four remaining enemies in a series of vignettes. Von Wilkinson provides Dracula with the information he needs: Dr. Sun has set up base in Boston. Wolfman and Colan end the issue with a conclusion straight out of an EC horror anthology of the 1950s as Dracula unleashes his four undead victims to exact their vengeance on Daphne Von Wilkinson.

Giant-Size Dracula #5, “The Art of Dying” marked the final issue of Marvel’s quarterly companion series, The Curse of Dracula. Writer David Anthony Kraft is teamed with new artist Nestor Redondo to provide an intriguing adventure of Dracula in Europe between the first two World Wars. A Zeppelin airship plays an important role in this story which depicts Dracula as purely a savage predator with no depth of character. Kraft’s period-piece scripts were inferior to Chris Claremont’s contemporary stories focused on psychic investigator Kate Fraser and Inspector Chelm. The format of the quarterly companion series showed promise; it is a pity that Marvel quickly lost their way. 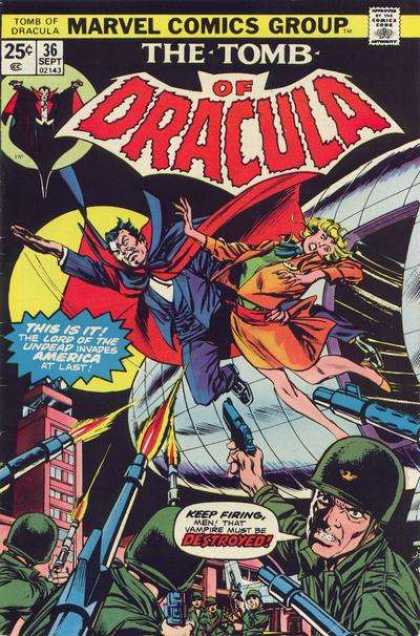 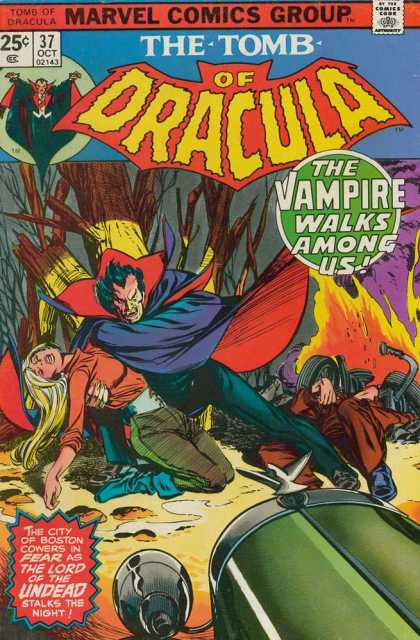 The Tomb of Dracula #36, “Flight of Fear” is mainly concerned with Quincy Harker, Rachel Van Helsing, and Inspector Chelm’s failed attempts to prevent Dracula from leaving Heathrow on a flight to Boston. The vampire succeeds and Quincy and Rachel vow to follow him as Wolfman prepares to shift the setting from the UK to the US. The story switches to Brazil where Frank Drake and Brother Voodoo confront Danny Summer, who has been held in hypnotic thrall by Dracula for the past year. The issue ends with Quincy and Rachel saying their farewell to Inspector Chelm at Heathrow as the reader learns that the psychiatric consultant for Scotland Yard is in the pay of Dr. Sun.

Issue #37, “The Vampire is Coming” kicks things off in the new Boston setting for the series by introducing two new supporting players, the Woody Allen-like hack journalist, Harold H. Harold and the Jewish princess of his dreams, Aurora Rabinowitz who works as a receptionist at his tabloid publisher’s office. The injection of such heavy comic relief initially seems quite jarring as does the introduction of Dr. Sun’s henchman, the one-armed scar-faced Chinese assassin, Juno who seems to have wandered in from one of Doug Monech’s espionage epics for Master of Kung-Fu or even his modern-day The Frankenstein Monster series for Marvel. Following this, Harold H. Harold rescues Dracula after the vampire is involved in a car accident and takes him back to his apartment. Brother Voodoo gives Frank a well-deserved talking to about taking responsibility for his actions and then magically sends him to a Boston airport just as Quincy and Rachel debark from their plane as this thoroughly offbeat issue sets a daring new tone for the award-wining series.

Just heard that Gene Colan passed away yesterday. His work on DOCTOR STRANGE and TOMB OF DRACULA was stunning. He was one of the masters of the field. Condolences to his family and friends. A truly remarkable artist.