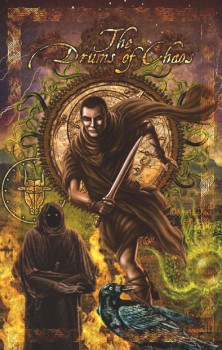 Drums alludes to Lovecraft’s “The Dunwich Horror” in a number of ways. One being the goatish physical features of Jesus Christ, as they bear a strong resemblance to Wilbur Whateley. Another being the virgin Mary, an albino woman who lost her mind when she came into contact with Yog-Sothoth and bore his sons, just like Lavinia Whateley. Though there are several references to Lovecraft, this is not by any means merely a Lovecraft pastiche. 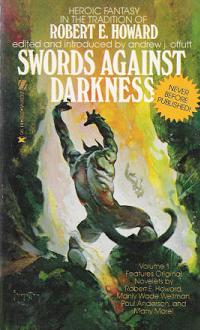 While Simon of Gitta has probably enjoyed a broader audience due to the accessibility of his tales (at one time readily available in the popular paperback anthology series Swords Against Darkness, as well as the Chaosium collection of Simon tales, The Scroll of Thoth), Tierney brings in a character mostly known to die-hard Tierney fans: John Taggart, a misanthropic time-traveler who works with the Lovecraftian Old Ones. So the novel is a sort of tie-in that brings together two of Tierney’s heroes and introduces yet another element into the Howardian Sword & Sorcery and Lovecraft mythos mix Science Fiction.

Sounds pretty crazy by now? It works. What you have here is dark fantasy on such a grand scale that I got the same feeling as when I watched the Star Wars movies as a youngster.

The kind of historical research that goes into writing a novel like this is astounding. It isn’t something an author just does over the course of a year, or even a few years. Tierney’s knowledge of ancient Rome and biblical events is encompassing. It is as if he literally picks you up and drops you into that world, 2000- plus- years ago. He also adds a nice cosmic touch by delving into Gnosticism with the mysteries of the Goddess, Sophia.

Tierney is not only a well-known prose writer in the genre but a respected poet to aficionados of Sword and Sorcery. Like Robert E. Howard, this spills over into his prose writing as he writes with a very fluid poetic style, and he is at his best here.

If you are into Robert E. Howard’s heroic slashing and slaying, the Lovecraft mythos, or just a damned fine dark fantasy yarn spun by a master story-teller, I urge you to pick this up.

Howie Bentley is an international recording artist, and the lyricist/songwriter/guitarist for the heavy metal bands Cauldron Born and Briton Rites. Howie is also the owner of Echoes Of Crom Records–an independent record label specializing in heavy metal bands with sword & sorcery and Lovecraftian lyrical themes.

I’ll vouch for the Scroll of Thoth being an awesome book. I lost my copy years ago and I was thinking of buying it again. Very good storytelling, both for the Sword and Sorcery but also for the larger “Gnosticism meets Lovecraft” themes.