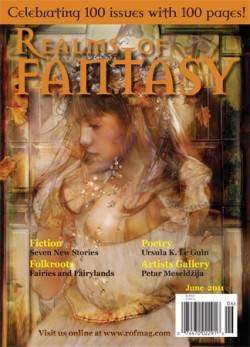 Congratulations to Realms of Fantasy on its 100th issue (which actually has 101 pages, but I guess the extra page is for good luck, and doesn’t make for quite the same alliterative headline), a notable accomplishment for a publication that has been brought back from the dead on several occasions.  In fact, the magazine has had five publishers, with founding editor Shawna McCarthy the only person who has been there for the duration, according to the issue’s “Little Known Facts.”  Fiction contributors include Leah Bobet, Josh Rountree and Samantha Henderson, Sharon Mock, Thea Hutchinson, Patrick Samphire, Euan Harvey and David D. Levine, as well as poetry by Ursula Le Guin and various art, book, gaming and movie reviews along with the regular Folkroots column by Theodora Gass.  Here’s the complete Table of Contents.

I’m guessing that Realms of Fantasy has never before been mentioned in the same breath as The Paris Review, so we here at Black Gate 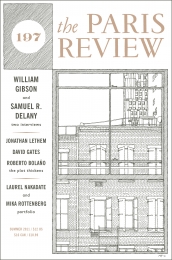 Tastemaker Central take particular pleasure in noting that the latter literary bastion has much of interest to the same people who read the bastion of fantasy genre tales (and perhaps vice versa?). The Summer 2011 features “Art of Fiction” interviews with  Samuel R. Delany and William Gibson, as well as a story by Jonathan Lethem, “The Empty Room,” that’s available online.

Hmm, that’s not quite what alliteration means, but we’ll let you go as using poetic license. 😉

In fact, technically, “100 issues with 101 pages” would still be alliteration.

Yeah, technically you’re right, but doesn’t quite roll off the tongue as well.

I guess what you wanted was, “doesn’t make for quite the same rolling-off-the-tonguiness headline.” 😉 (Is there a single word that encapsulates that expression?)

Maybe such a headline would be considered “tongue-in-cheek”?

It’s actually 104 pages if you include front and back covers. If you don’t, it’s 100 pages exactly.

Must be some kind of Black Gate first.

Black Gate Tastemaker Central! Now there’s a string of words that makes me very happy. I would love to live in a world where reporters from the Wall Street Journal felt they had not done their jobs in covering, say, Fashion Week, until they’d called Black Gate Headquarters for comment.