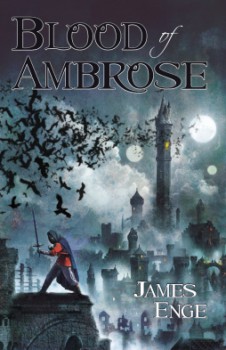 To summarize my reactions to Blood of Ambrose – I enjoyed it. I found it compelling reading throughout, and I was fascinated by the characters. But… you knew there had to be a but, right?… it doesn’t wholly work as a novel. The main issue is one you might expect from a first time novelist with experience in short fiction – it is too episodic and not sufficiently unified. It reads more like a series of novellas set end to end. And also – in common with other fantasy novels I’ve been reading lately – the body count is enormous, to the point you wonder “what’s the point?” If the good guys let the bad guys get away with this much awfulness (and most of the victims are just ordinary folks caught up in things), then they don’t seem to be doing a very good job.

The story opens with Lathmar, child King of Ambrose and Emperor of Ontilia, fleeing his uncle and regent, Lord Urdhven, who we soon learn was responsible for the deaths of the King’s parents, and who is soon ready to kill the King’s grandmother, Lady Ambrosia. But Ambrosia is a nearly immortal woman, is in fact the ancestress of the entire royal line. And her brother, also nearly immortal, is Morlock Ambrosius. Morlock arrives in the nick of time to save his sister – in a nicely executed set piece – and soon the battle lines are drawn: Lathmar, Morlock, Ambrosia, and various loyalists, against Lord Urdhven and his cohorts.

Which works nicely – Lord Urdhven is an interesting enough villain, along with his poisoner Steng, but soon we learn that he is not the real villain – he is under control of something much more sinister. And so the King and Morlock’s first victory proves somewhat hollow, and they are quickly battling something worse. There are thus ups and downs in their campaign, leading eventually to Morlock encountering people from his distant past – indeed even his father, whose identity is fairly significant. There are several further climaxes, all pretty nicely done.

Besides the fantasy elements (worthwhile stuff) and the escalating plot with its multiple climaxes, the real interest here is the characters. Morlock is truly the most compelling, with his dourness, cynicism, and tortured compulsion to do right. His sister is interesting as well, as is his sidekick, the dwarf Wyrtheorn. (Though neither of them are entirely original creations, it seems to me – no slavish copying here, just fairly standard-issue tropes.) Lathmar, the King, is the focal point. We are meant to see him grow – and he does, and he is a good young man, worth reading about – but at some level he doesn’t fully convince.

Still, Blood of Ambrose is really enjoyable. Yes, I had quibbles, but I enjoyed myself throughout. The various set pieces – the flying horse, the birds, the duel with the golem, etc. – are great fun. The characters are a joy to follow, and the writing is effective and I always wanted to know what happened next. 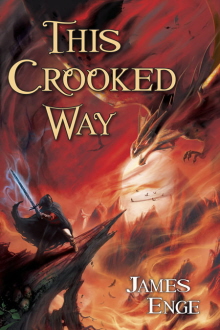 And a lot of what happens next – that is, after the end of Blood of Ambrose – is given in This Crooked Way. As I said it is a fix-up novel made up of the earlier stories, and a couple more, plus some connecting material and some revisions to make the stories work more as a continuous narrative. Indeed, I urge readers not to skip Appendix B, which purports to reveal the sources Enge used in creating his quasi-Arthurian characters, and which also archly confesses to the fix-up form of this book.

The main character is of course Morlock. Morlock, as we know from Blood of Ambrose, is a long-lived magician – or, more properly, a “maker” – tortured by his past, and by his family, and by drink, and by his inconvenient insistence on doing good. He is, as it so happens, the son of one Merlin … yes, it would appear, that Merlin. At least sort of. And it is Morlock’s conflict with his father over the fate of his mother Nimue that drives this novel. For Merlin has gone to great lengths to make Nimue immortal – but this condition is doing her no favors, largely because Merlin’s means of granting her immortality requires her to be split into three parts. Morlock’s quest here, then, is to reunite the pieces of his Mother so that she may live or die as fate wills. But Merlin is a very powerful magician himself, and thus a dangerous foe.

Enge structures the book so that as Morlock journeys he encounters numerous dangers and adventures. Some of these are traps set by Merlin, others are merely hazards of a difficult trek across a dangerous land. Furthermore, in his travels he meets other people – in particular a family consisting of a knight and his sister, and the sister’s children, two boys and a girl. A few episodes are told from the points of view of members of this family, with Morlock a major character but not necessarily the focus.

What happens, then? A lot: encounters with various horrifying beasts such as the Boneless One, the insectoid Khroi, werewolves, spiderfolk, and dragons. Plenty of clever magic: Morlock’s mastery of fire, including sentient flames; an extra-dimensional house; golems; different sorts of magical swords; Merlin’s various clever but often flawed spells. Add plenty of swordplay, a magical horse, and a rather self-absorbed troll. I’m purposely not detailing the individual plots of the episodes. Each is enjoyable, and quite well-constructed. Each works as a single story, but Enge has done a good job of propelling the overall narrative so that the book itself really does read as nicely unified. (Though I will say that I thought the additional connecting material from the point of view of a Khroi was superfluous, rather boring, and would have been better omitted.) Morlock’s character is nicely done and always fascinating. The secondary characters – Merlin in particular, but also Morlock’s various fellow travelers – are all well done too. The telling is consistently mordantly humorous. Enjoyable work.

And while you’re exploring the work of James Enge, don’t forget to check his web page at jamesenge.com, which includes links to a number of his stories, including some Morlock pieces not included in the two books to date; and also that of his publisher, Pyr, at which one can find the most recent Morlock novelette, “Fire and Sleet” (as well the free e-novella, “Traveller’s Rest” – ed.), a first rate addition to the series.

Right now, I’m savoring the thought that, were Morlock to read Claire’s comment, he would shrug and say, “Eh.”

Only, the way Enge would write the scene, we’d see that response coming, and it would still be sidesplittingly funny and bittersweet when it happened.

How does he do that?

Morlock would get a wallop for it, if he dared. But it would be a friendly, flirty, SUGGESTIVE wallop, so that’s okay.

I somewhat enjoyed Blood of Ambrose but something didn’t click with me. I wasn’t a big fan of most of the characters with the exception of morlock and his dwarf apprentice.

But for some reason i bought This Crooked Way and it sat on my shelf for over 6 months. when i finally did read it i loved it. I finished the book very quickly and The Wolf Age came out shortly after i tore through that one as well. Those last two were so good i sit in high anticipation for the next book.

Although one thing about the books i noticed is i enjoy the beginning and middle of the books more than i do the end of them. James ends his books in the weirdest ways.