The Pre-Raphaelite Sisterhood woke with much gusto. A puppy pile was had, as was a deliciously free, Con-Suite breakfast. There was a random, rather interruptive child building a trebuchet at the table. Sadly, the trebuchet didn’t work.

[The Critic suggests that you never attempt to give C.S.E. Cooney a banana at breakfast or otherwise. She has a mild anger at bananas.]

Overlord O’Neill went down to the dealers’ room. His Saturday activities included zapping book mites with a nano-taser, shouting to all and any of the merits of Black Gate and entertaining Bradley P. Beaulieu, the author of The Winds of Khalakovo. Yes, dear reader, there were so many authors at WisCon you couldn’t itch your back without knocking one off your shoulder.

While O’Neill was go-go dancing and having the Drexler-Smalley debate with those that walked by, C.S.E. Cooney and I attended Monsters!, a panel exploring the fascination of anomalous villains, led by David Peterson, P.C. Hodgell, Richard S. Russell and Tuppence.

What is the definition of a monster and how has it changed throughout history? The general consensus was that a monster is that which is unexplainable, unnatural, uncontrollable and has no culture. 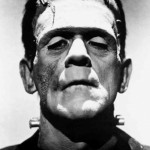 Today’s monsters usually cause psychological discomfort, whereas Medieval monsters were more of a spiritual bane.

Extending the question to who can be a monster, the experiments of Stanley Milgram and Solomon Asch were examined. Two continually referenced texts were On Monsters by Stephen T. Asma and The Monsters by Dorothy and Thomas Hoobler. 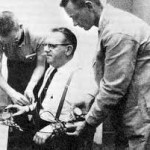 Meanwhile, Katie Redding attended the Human, Cyborg or Just Another Robot? panel that, well, I refuse to talk about. We are not convinced that our Ms. K. is all that she used to be. In fact, we think she is more. There was a mech-hole in her noggin, (think Terminator 2 where they unscrew the back of Arnold’s head) and now she can lift mid-sized sedans and calculate large sums quicker than Rain Man.

Moving on, it is to be noted that if a Madison local you do not know professes knowledge of a great sit down Mexican restaurant for about ten people (and that local seems to be of young-ish, college student age) – don’t go. It’ll be a cheap dive with greasy beans. Sigh.

[The Critic notes that the guacamole was good. But, for excellent guacamole, invite C.S.E. Cooney to your house. She uses avocados, onions and magic.]

Here is the bad thing about conventions, there are bound to be more panels than you are able to attend. C.S.E. Cooney and I split ways. She to The Traveling Fates concert and I to Postcolonial Steampunk:  A Global Perspective.

Everybody recalls bustles, goggles, and Victorian London when thinking about steampunk…but that doesn’t have to be all the genre contains. Jaymee Goh, Ay-leen the Peacemaker, Amal El-Mohtar, Liz L. Gorinsky and Guest of Honor Nisi Shawl discussed the deconstruction of the genre to “reclaim the time period in the name of the formerly colonized.” 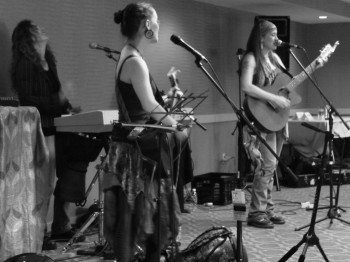 For thoughts on a more inclusive steampunk, check out Beyond Victoriana, Silver Goggles and Amal’s essay, “Towards a Steampunk Without Steam.”

Through a form of ancient time-bending, I was able to make it to the last ten minutes of The Traveling Fates’ concert. If you aren’t familiar with the band, it’s S.J. Tucker, Ginger Doss and Bekah Kelso folk-rocking and mythpunking the hell out.

The Pre-Raphaelite Sisterhood rejoined forces for the reading:  Space Fairies from Beyond. Why yes, this was the reading that had not only Seanan McGuire, but also Cat Valente and a bevy of other fabulous writers. Valente was the stand-out with her Wyverary meets girl-child excerpt from The Girl Who Circumnavigated Fairyland in a Ship of Her Own Making.

[The Critic explains that if one is not familiar with a “Wyverary” it is, in this case, the offspring of a Wyvern and a library.]

More imporantly, PARTIES WERE HAD!

Cat Valente threw a Fairyland launch party that included all manner of wonders. If you weren’t there, you missed a brilliant excerpt, booze, the musical musings of S.J. Tucker (which included her thoughts on toe-lickers) and Seanan McGuire singing quite wicked and lovely and bold. There was also a fiddle player, canoodling, Amal and Claire dueting on “Mister Fox,” the stealth cello of Betsy Tinney and John O’Neill holding a paper flower for at least an hour.

I would tell you more…but the night was long and all I can remember is morning came much too quickly.

Betsy Tinney, dressed like a CAT, right down to the slit pupils and the tail and the ears made out of black bird fluff! Oh, she was a wonder. It ALL was! Only in FAERIELAND.

Pattyhawk, you truly are a wonder!

Black Gate » Blog Archive » WISCON FRIDAY: In Which the Pre-Raphaelite Sisterhood Crashes A Zeppelin Into the State Capital

@C.S.E. – And you were dressed as a red goddess! And I as, um, er…well, let’s not discuss the short shorts.

And soon it will be ReaderCon!!!

You were dressed as a pixie punk biker chick, with a leeetle floofy garter on your leg and eyes of gold and jade. DUH.

I always LOSE the Drexler-Smalley debate. Nanoengineered fuel cells with glucose fuels interlaced with the raw building material are chemically interrupted by caffeine. What the hell good is that?? Besides, I’d rather argue politics with Pattyhawk.

I will be dining out for months on my Wiscon stories of the Pre-Raphaelite Sisterhood. Ladies, it was a pleasure.

Alfred, when you talk like that, all I want to do is nod and say, “Yes, Doctor.”

Tell me, did you ever consider a white lab-coat and a pair of oversized goggles to go with your awesome sweat pants and fanny pack?

P.S. AND ANYWAY, WHO GAVE YOU PERMISSION TO CALL HER PATTYHAWK??? That’s MY name for her, after another of our friends appropriated my “Patty ‘the Tiger’ Templeton” nickname.

Get your own danged nickname. Sheesh!

Oh, awright. You can call her Pattyhawk. If SHE says it’s okay.

Black Gate » Blog Archive » ReaderCon 2011: In Which the Pre-Raphaelite Sisterhood (well, some of them) Encounters Cannibal Towns, Dirty Limericks and Googly Eyeballs

[…] was at this reading that Black Gate Magazine’s very own Patty Templeton shone out like the Supernova she is! Her story “Fruit Jar Drinkin,’ Cheatin’ […]