It was a stormy Sunday morning in Wisconsin. Guests of the Madison Concourse startled awake to the tune of “Hellfire,” from Disney’s Hunchback of Notre Dame, floating in from a nearby hotel room.

The voices were tuneful (well, mostly — given the amount of sleep the singers were operating on) and vigorous (especially for that hour of the morning), and, after all, who could resist lines like:

Voice 1: It is the gypsy girl, the witch who sent this flame!

The guests, satisfied that no poor soul was being murdered and flung from a bell tower in a righteous rage — that, after all, it was only Ms. El-Mohtar and myself greeting the morning in our usual way — rolled back over and went to sleep…

…Until, that is, various strains from Hadestown, set on random, jolted them upright again, reminding them that, though it was a dark and dreary day, indeed, a day worthy of the Brontë sisters at their stormiest, it was time to get up, get up, sweet slug-a-bed, and face the world, and eat all the doughnuts in the Con Suite.

We did save some breakfast for John O’Neill, have no fear. Ms. Templeton even toasted him a piece of white bread and trotted out a little tub of peanut butter from the Dagda’s legendary Cauldron of Plenty her purse, because, if we are to be Minions, lo, let us be thorough Minions!

(Minions, in my opinion, is a far more dignified title than “Black Gate’s Booth Babes,” an appellation with which Mr. O’Neill’s pet demons once urged him to try and saddle us. Those demons were conspicuously absent at WisCon, probably for fear of avenging Valkyries.)

After this, we wandered over to the WisCon art gallery and talked to the illustrious Catherine Crowe, who buys the enamels for her artwork, I’ll have you know, from a company that’s been in business for  500 years, give or take.

Since first becoming acquainted with Crowe’s enamels, I have coveted the crow necklace for my own — until, that is, I lately learned it was also Ms. El-Mohtar’s favorite. Magnanimously, I did decide that she should have it, whilst I would bend all my desire upon the double snakes. First of all, LOOK AT THOSE PRETTY COLORS OH THE PRETTINESS SO PRETTY!!! And, second of all, I grew up wanting to be the Childlike Empress in The Neverending Story, that I might wear my own dang AURYN of Fantasy and Reality.

And since it is Fantasy and not Reality that any of us will ever be able to afford either the snakes or the crows, a girl can dream. Especially when she is an anointed high priestess of the super-secret Pre-Raphaelite Sisterhood. (Or would be, if we’d ever bothered anointing each other. Does sharing St. Ives apricot face wash count?)

The next time we met up with Ms. Templeton, she’d acquired a very sparkly necklace. Had she suffered a relapse? Gone back to her former profession as a jewel thief, as she had been in days of old: a mere gamine running ragged in the slums of Paris? One dared not question her. One mistrusts both her stealth parasol and the glint in her eyes.

For a while there was a to-do when a monster appeared out of nowhere and chased Ms. El-Mohtar around the dealer’s room. I fought it off, however, and wrested, with the might of my thews and the solidity of my sinews, the rose-colored goggles from its eyes.

The monster turned back into Ms. Redding, perspiring lightly and breathing heavily from the transmogrification.

“Just a few more adjustments!” she crowed jubilantly. “Those goggles shall be my masterpiece!”

“But,” said I, “they turn whoever wears them into something truly horrible!”

Ms. Redding shrugged. “Those are but a prototype. I make of them a gift to you. Take them, with my compliments.”

As they were indeed very glittery and had rhinestones everywhere, I cried, “COOL!” and slipped them on. Time passed. I came back to myself in a strange room, supine, being plied with water and fanned with Pocket Program Books.

“Are you all right?” they asked. “You turned into something horrible!”

“Oh, NO!” Ms. El-Mohtar informed me earnestly. “Far worse. A sort of… Valley Girl.” She shuddered.

Ms. Templeton nodded, looking pale. “You said your name was Shelby and that you were seriously considering writing your memoirs from the Sunset Strip in ’72.”

On our way back from feasting, we ran into author Shveta Thakrar in the lobby.

“Shveta!” I hurled myself into her arms. “Are you ready for our AWESOME READING?!?”

“You bet!” For a moment she seemed crowned in a serenity of constellations and lotus blossoms. I blinked, and she went back to normal. “I will read an excerpt from my story ‘Not the Moon But the Stars,’ which will appear in Steam-Powered II, Lesbian Steampunk Stories.”

(Actually, she didn’t say ezzactly that, but she did read that piece, and I thought I’d plug the project, since several, ahem, sworn members of the Pre-Raphaelite Sisterhood, three of them already mentioned herein, have stories making an appearance in that particular Table of Contents.)

Ms. Templeton and I were scheduled to be reading with Shveta Thakrar and Shira Lipkin at the café Michaelangelo’s. We called ourselves “Goblin Girls and Bedlam Boys,” which title, I’m afraid, has kept Steeleye Span’s “Boys of Bedlam” in my head for a week straight.

“My staff has murdered giants, my bag a long knife carries

For to cut mince pies from children’s thighs, with which to feed the fairies

For they all go bare and they live by the air,

And they want no drink nor money.”

The reading went mighty swell. At first we thought no one would come. But then four people arrived, and Ms. Templeton, in a fit of philanthropical affection, insisted on the instant that we hug them all. Obedient to her whims (and terrified of her parasol) we did so. 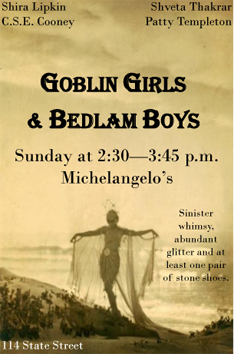 More and more audience started tricking in, thanks to some Tweet or other that Shira Lipkin instigated, and we left off hugging and took our seats, for we perceived at once that our fondess for ardent embraces might carry us to ever more snugglier nuzzlings and smoochings, leaving our poor reading neglected for all the fun we were having.

I started us off with a stomping excerpt from my novella Jack o’ the Hills. (Papaveria Press, 2011, and available, by the way, in print from the publisher and as an e-Book on Amazon!!!)

Ms. Templeton took us into Colorado with her as-yet-making-the-rounds manuscript “Kill Box Road Trip,” which is a hilarious and gruesome episode of two best friends just trying to kill some monsters, reclaim a stolen artifact, and punish the fluttery eye-lashed, skinny-tie-wearing, two-night-stander who was the cause of all their difficulties.

Ms. Thakrar, as mentioned, read to us about a jewel-smith rising through the ranks of a mighty king by her skill with mechanicals, and Shira Lipkin closed us out with excerpts from her novel Cicatrix, “a seriously bent portal fantasy,” and a short story called “And To My Wife” previously published in Electric Velocipede.

We did not, alas, remain for Ms. El-Mohtar’s group reading, so very sharply entitled (why didn’t we think of this???), “We Have Always Captured the Castle,” but we did not feel the loss too keenly as she had previously rehearsed her pieces for us.

Ms. El-Mohtar sang “Stairs in Her Hair,” from Welcome to Bordertown, read us her WisCon poem, and an excerpt from her story “To Follow the Waves,” published in the first Steam-Powered anthology, and also gorgeously recorded at Podcastle.

A Strange Horizons tea party later — wherein we discussed feminism, radioactive airport machines, nanotech, domes on the moon and rocket ships — and we were ready to fetch Mr. O’Neill, pack up all the remaining boxes of vintage paperbacks and Black Gate Magazines into the zeppelin (nicely repaired by Madison’s famous Winged Monkey Engineers), and take ourselves off to dinner at Tutto Pasta.

Possibly there was a flying spaghetti monster involved… But everyone knows it isn’t real… Right?

Rumor has it that for those of us who did not have to fly back to the Greater Chicagoland Area that evening, there was a highly successful GENDERFLOOMP party at the hotel, whereat Ms. El-Mohtar, recalling all those nice poets who addressed their Goblin Fruit submissions to one, “Mr. El-Mohtar,” decided a change was in order. Slouchy hats and suit jackets were had. Apparently, the party stretched into the Tomorrowlands, rather like this blogpost.

Alas that we weren’t there to see it!

No, Ms. Templeton, Ms. Redding, Mr. O’Neill and I, we were already on our way back home, to bouncing baby boys (Ms. Redding), dancing computer genius boyfriends (Ms. Templeton), antsy horror-loving daughters (Mr. O’Neill) and a bowl of popcorn left out near my bed by my super-great housemates.

…But we had not gone five miles before we stopped at Ella’s, the MOST AMAZING PLACE IN MADISON EVER!!! It has a carousel! And a big banana! And Batman! And John O’Neill shook hands with the Robot King of Ice Cream! Speaking of which? That ice cream? There is nothing like it in the world. Wisconsin. Who knew???

So, see, you just HAVE to go to WisCon next year. Or the bananas will get you.

[Part One: WisCon Friday is here.

Ah, so you did track down some Steeleye Span. Sorry about the earworm, but oh, it’s gorgeous stuff, isn’t it?

Oh, I knew that one! I was grateful for the reminder, though! There’s another great rendition someone reminded me of today. Jolie Holland’s cover! SO GOOD!

John, lemme know if you ever need booth muscle to complement the booth babes (or, a little thrash along with the flash). Services included are demon-quelling and sale-boosting. Reasonable rates.

I should also add that I supply my own brass knuckles and wear a shady-lookin’ fedora, just to round out the package. Our motto is: “No better goon for your doubloon.”

John probably does need a new Booth Babe — and you’re JUST the guy to do it.

After all, the rest of US graduated to Minionhood, the Next Level Up, several cons ago.

You gotta start at the beginning, man. Fedoras and all.

My love for these posts is boundless as the look of the sea.

Your infinities do me honor, Ms. El-Mohtar.

It was a dirty job, but SOMEONE had to do it. And thankfully, Patty’s arm is twistable!