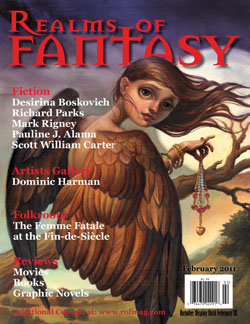 The first Realms of Fantasy resurrected under new publishers, Damnation Books, for February 2011 features the fiction of Desirina Bokovich, Richard Parks, Mark Rigney, Pauline J. Alms and Scott William Carter.  The last has a story entitled “The Time of His Life” which is described as:

It’s so difficult to find time for yourself amid the demands of family and work.  Wouldn’t it be great if you could just carve some out?  Maybe, maybe not.

Realms of Fantasy tends to favor a wee bit too much of fairy land for my tastes  (an unfair criticism, since that is, after all, a large part of its niche), but this sounded different and intriguing enough to get my immediate attention. Who after, all, hasn’t fantasized about having some private place to get away from it all?

In this case, the narrator discovers a room in which he can spend as much time as he wants on creative pursuits, but only minutes have gone by when he returns to the real life of kids and bitchy wife and work.  A Twilight Zone kind of tale that’s ultimately about resisting the allures of temptation and self-gratification.  The wife’s transformation from bitch to loving partner isn’t quite believable, though perhaps Williams is suggesting this has less to do with the wife’s actual attitude than the husband’s perception. And he does get right the marital tension between two equally tired (but for different reasons) partners with young children. 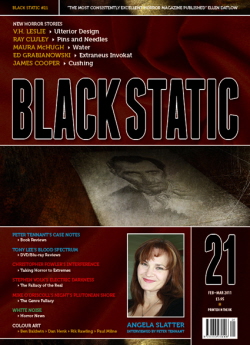 However, I have to wonder what the editors do here at this magazine.  Okay, maybe you can make an argument that intense cold could actually scorch, though I tend to associate it with extreme heat. But racing minds, chills going up a spine, the mere mention of a shudder should send off alarm bells to break out the red pencils and clean up clumsy phrasing that mars an otherwise decent story.

Horror magazine Black Static for February-March 2011 has new tales from V. H. Leslie, Ray Cluley, Maura McHugh, Ed Grabianowski and James Cooper.  In the “first lines that hook you into the story” department, here’s the opening to McHugh’s “Water”:

“The pot lids hopped and fizzed when Mark’s mother laid the wooden spoon down calmly, opened the back door of the kitchen, disappeared into the overgrown garden, and drowned herself in the river that flowed past their house.”

True horror lies not in the stuff of sexy vampires or ghost stories or chainsaw massacres, but within the mundane context of ordinary existence.

Speaking of editors (proofreaders, actually, I guess), what does ‘laid the wooden spoon down the calmly’ mean? And if it’s ‘down then calmly, opened’, shouldn’t the comma come before the ‘then’?

I calmly fixed the misplaced “the”–thanks for pointing it out. A chill went up my spine when I saw your comment and my typing error. I shudder to think what scorching embarrassment otherwise would have resulted. Hit me with a wooden spoon.

You’re welcome. It’s just another example of the Grammarian’s Curse–comment on spelling/grammar in a blog post, and you’ll make an error yourself.

I’ve been hearing a lot of good things about Black Static. I may get a subscription.

[…] We last reported on Realms of Fantasy with issue their February issue. […]