With Black Gate 15 just around the corner I thought I’d start devoting some time to some products that arrived too late for us to cover, or that just didn’t fit into an issue nearly as large as issue 14.

I was particularly taken by two science fiction titles. The first is a campaign setting, and while it utilizes the Mongoose Traveller rules, it’s in a completely different universe from Traveller itself.

The other is a solo tactical board game. If, like me, you name “The Doomsday Machine” as one of your favorite classic Star Trek episodes, it’s a must have, but it’s pretty darned cool even if you don’t have a clue what I’m talking about. 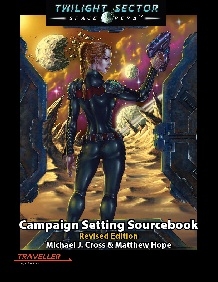 I’ve mentioned before that as much as I love classic Traveller one of its drawbacks was a setting so huge it could be hard to find your bearings. Enter the folks from Terra/Sol Games. They’ve created an entirely new campaign setting utilizing many of the concepts familiar to Traveller players – for instance, the way jump space and character creation works – in an entirely new setting. They also updated the “feel” of the game to include more recent science fiction concepts, like artificial intelligences, consciousness transfers (life after death via computer recording), and cybernetics — as well as a multitude of additional topics.

The Twilight Sector Campaign Setting includes an in-depth historical overview to better understand the setting as well as the requisite pages full of background details to update Traveller‘s feel from its ’70s roots, but almost half of its 110+ pages are devoted to the worlds of one sub-sector of the campaign. And these aren’t dull, flavorless write-ups, but inventive and creative settings loaded with adventure hooks. If you’re a science fiction game fan, you’ll be able to put most of these worlds and ideas to use in whatever flavor of game you’re running, from Firefly to traditional Traveller or anything out there among the sea of suns. It’s an impressive opening salvo of what’s planned as a new game line, and it’s available for a song. Highly recommended. 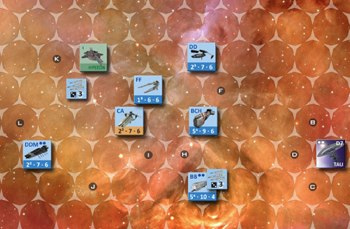 I love this little game. You see, there are these immense planet destroying robots on their way toward your population centers, and you have a fleet with which you can attempt to stop them. The movement of the planet killers is controlled by cards that determine their targets, the number of hexes they travel, and any extra actions they engage in – stopping to make repairs, say, or to wield an especially nasty super weapon. On your side is a fleet of different kinds of star ships. Some are swift but relatively fragile; some are slow and deadly.

There are a number of kinds of robot ships, and Astra Titanus itself comes with a wide array of different scenarios. There’s a lot of replay value in even one scenario, because the movement of the robot changes from game to game owing to the cards. I’ve read some people comparing it to other famous solitaire war games that I frankly don’t know much about. All I know is that it’s far more fun than you’d think to shift these little counters around and try to keep the robot from advancing against its target.

You have to experiment with the tactics and capabilities of your ships, and tension honestly rises as the planet killer comes closer and closer to your home and attacks your ships. The game brings out my inner Kirk. I’ve played through the first scenario multiple times and I’m eager to try out some more. 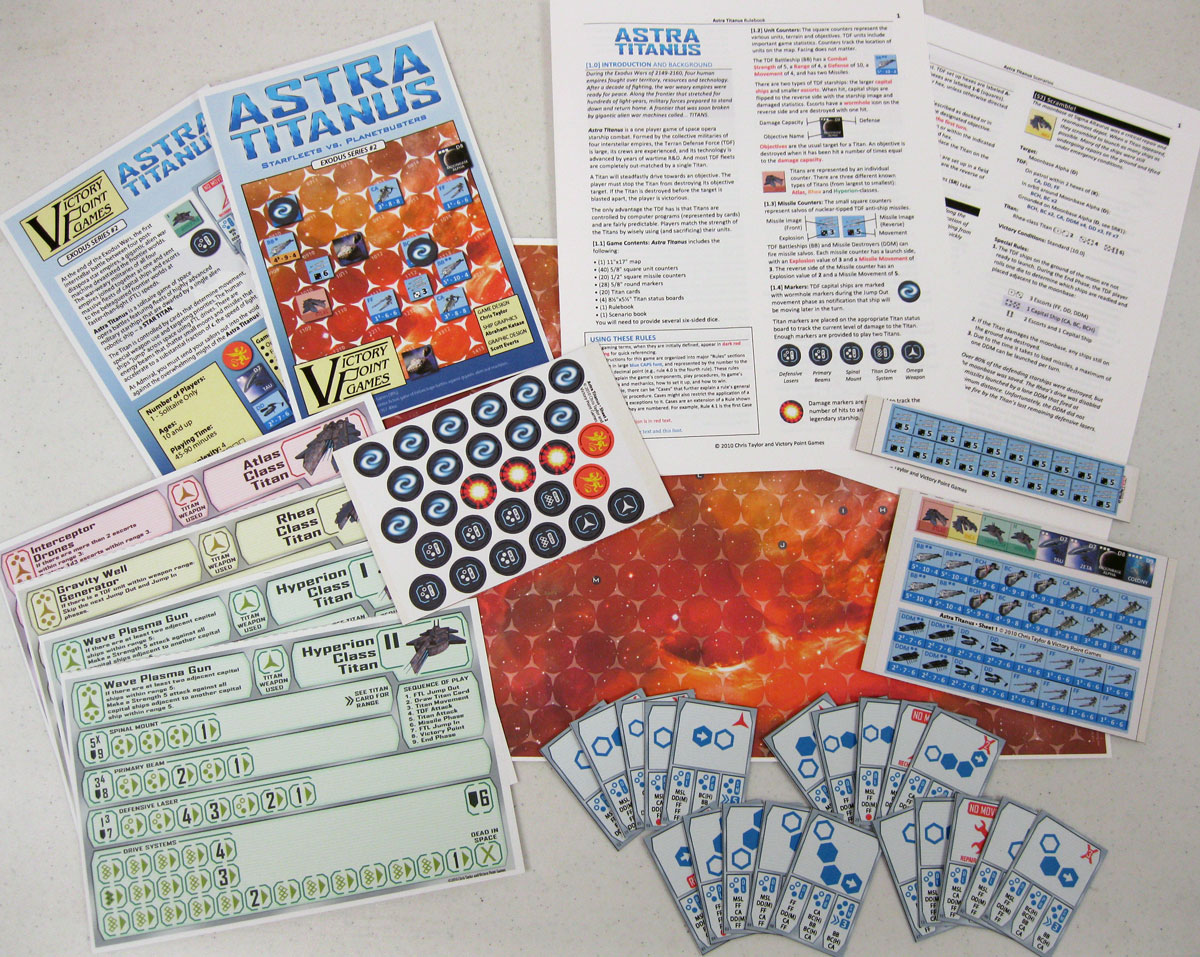 On the bottom of this picture are the cards shuffled each game to randomize the movement of a Titan, or planet killer. To the bottom left are the different sorts of Titans. They’re all bad news, but some are even worse than others. Also visible, though mostly covered by the rule book and unpunched game pieces, is the star chart. In the upper right is the small instruction booklet and one of eight scenarios.

What else can I say to entice you? The game’s even more entertaining than I’d hoped. Every night when I’m up late working I tell myself that in only a few more weeks I’ll finally have time to play Astra Titanus again. If you’re even remotely intrigued, I urge you to check it out.