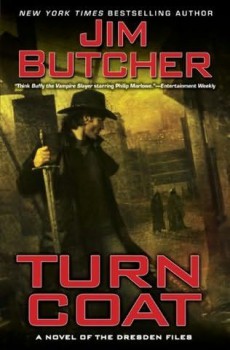 Private-eye wizard Harry Dresden returns in Jim Butcher’s Turn Coat though, in point of fact, he hasn’t been doing altogether that much investigating lately. Between wars with vampire courts and secret enemies finally getting the Black Council on the move, it doesn’t seem like Harry is going to have the opportunity to track down a missing person or provide evidence in a divorce dispute any time soon.

Butcher jumps right in with his trademark wit. The characters in Turn Coat are, by now, so familiar that they provide a little thrill of recognition just by being mentioned. Waldo Butters, for example, has next to nothing to do with the story, but I can’t help but be pleased to see him again because I like Waldo Butters. That is something that plays to Butcher’s strong suit: the dialogue and relationships are so easy and natural that they cannot help but be compelling, even when no one is doing anything.

The comfortable familiarity with his cast, while a draw in one sense, is actually a double-edged sword. There are times when it can actually become a little grating, especially in light of Butcher’s habit of just announcing character traits through dialogue or narration. It bespeaks a certain lack of faith in the reader when, after Lara Raith has just sent three of her own employees off to be eaten by vampires, she feels the need to announce to Harry that she is not just a monster, but “an elegant, efficient, monster.” Having been present for Butcher’s descriptions of Lara’s elegance not just in this book, but in the several previous books in which she appears, I feel it is safe to say that this is a conclusion I was capable of drawing on my own.

Harry’s wit and charm also obscures the fact that Turn Coat, more so than any of the previous Dresden Files, feels like it is essentially a filler novel. Morgan, Harry’s long-time nemesis — whose passionate enmity for Harry I’ve always found a bit baffling — has been framed for murder. He shows up on Harry’s doorstep and Harry, benevolent cynic that he is, naturally agrees to help try and clear Morgan’s name. Framing Morgan is the first direct action that the Black Council — the spooky conspiracy of wizards that’s been haunting Dresden for the whole series — has ever really taken, which was a bit of a relief. But no real progress is made in the situation, no big reveals happen, until the very end and, despite all the work Harry’s done in the preceding four hundred-odd pages, the status quo remains largely intact.

In fact, most of the novel revolves around Dresden chasing and being chased by a Navajo skinwalker — a semi-divine being portrayed here to much greater effect than it was in the ill-fated Dresden Files television show. This monster, and a new-arrival demon summoner who has no previous relation to any events in Harry’s past, are adversaries tangential to the arc that’s been building over the last few books, and don’t appear to serve much of a purpose other than to help clear out a few ancillary characters and tidy up a few loose ends before the real work of fighting the Black Council begins.

It is a criticism often leveled at the paranormal-mystery or urban-fantasy series subgenre that the main characters tend not to change very much, and Dresden does seem to partake of this literary inertia. It is always second and third-tier characters that are harmed or killed off, always global changes in the status quo that leave Harry and his life essentially untouched. Butcher actually eschewed this principle early on in the Dresden Files but as the series has gone on, the specter of that iron status quo has begun to rear its head. This unwillingness to let Harry actually suffer, to subject him to a real, palpable loss is, like Butcher’s fast-paced and clever writing style, a kind of double-edged sword. On the one hand, one can pick up any of the Dresden novels without that sense of dread that something upsetting or depressing is going to happen. On the other hand, it robs the story of any real sense of abiding danger.

Jim Butcher’s Dresden Files, and Turn Coat in particular, are always a fun read. Butcher is always entertaining, at the very least, and there’s pleasure to be taken in seeing Harry Dresden, sarcastic, smart-ass wizard being a sarcastic smart-ass. If it is true that the series could be a little stronger, here is hoping that the next book, Changes, due out in April, offers a little bit more on that front.

Well, you have to admit, Changes fulfilled the promise of its title.