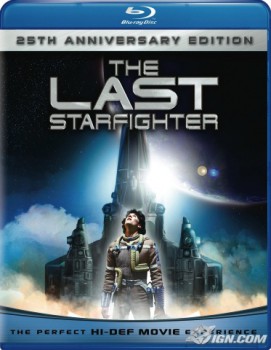 “The 25th anniversary edition of The Last Starfighter.”

This is the response I got when I asked a friend about the holiday gift he was most excited about. Frankly, I wasn’t sure I heard him right the first time so I asked for a repeat and sure enough, I had heard correctly.

This confusing bit of trivia caused several questions to spring up in my holiday-addled brain.

Was there really a marketing department somewhere in the world that actually believed there was an audience desperately waiting for a twenty-fifth anniversary edition of this movie?

Apparently. Was THIS the gift that a friend of MINE was actually the most thrilled to unwrap on Christmas morning? Who knew?

Obviously not me, because it actually took some time before I could conjure up the movie plot line and a few vague faces of the actors who starred in it. If a twenty-fifth anniversary tribute was actually on the market, then The Last Starfighter hit the mall movie theaters right smack in the middle of gravity-defying AquaNet hairdos and skinny, neon leather ties worn with white linen blazers. 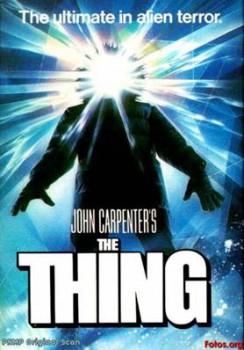 Yes, it had finally happened. Enough time and space had come between the present day and the 1980’s that people of a certain age are obviously feeling nostalgic about those ten years.

I’ve seen it coming for awhile when running an eye over the magazine rack at the local bookstore. Earrings are getting bigger, guys’ hair is starting to get longer and if that wasn’t proof enough, I actually heard someone quote Gordon Gekko’s “Greed is good” speech while standing in line at the coffee shop.

Just to confirm whether getting jacked up about watching The Last Starfighter was only one person’s folly or an honest-to-goodness trend, I did a little informal survey on New Year’s Eve.

In a small, age-mixed crowd of reasonably cool kids, I brought up the story of my friend’s favorite Christmas gift, just to see the reaction.

The responses I got back were not only surprising and entertaining, but caused me to fill up my Netflix queue to the breaking point the next day.

Apparently everyone has a geeked-out, 80’s-mall-theater favorite and here are the five that were most mentioned, in no particular order: 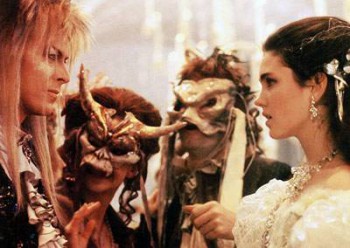 David Bowie wearing jodhpurs and wielding a riding crop was the image that came roaring to mind when this title was mentioned.

After I had a sit down and the wooziness passed, I remember it also starred a sixteen-year-old Jennifer Connelly in her first major movie role, alongside an entire cast of Jim Henson’s muppets.

Believe it or not, Monty Python alum Terry Jones penned the early version of the script which explains the borderline nightmarish feel to the story. And this very moment there’s a petition on Facebook to get Tim Burton to remake it. 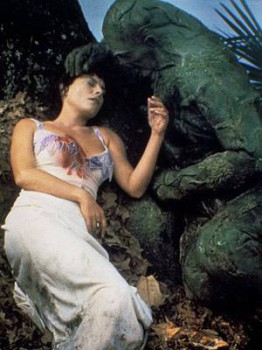 It wasn’t until I looked it up that I realized Wes Craven was responsible for writing and directing this early-entry into the comic-book-to-big-screen genre.

Adrienne Barbeau, somewhat of an 80’s “scream queen,” stars as the damsel in distress and was fresh off her role a “Maggie” in Escape from New York.

She headed straight into another classic Creepshow that same year.

(Both movies would have qualified for this list, had it been a “top 10.”)

Swamp Thing has some fairly icky bits, along with a story line and effects which hold up well today, so much so that Matrix producer Joel Silver is shopping a 3D remake around to studios even as we speak.

And speaking of Ms. Barbeau, she had a very busy 1982 doing an un-credited voice over as the chess-playing computer in the doomed Antarctic outpost of her hubby John Carpenter’s nightmare.

If you haven’t rented this one in a while, allow me to remind you of what I still consider the most disturbing horror movie scene to date; a disembodied head sprouting legs and flipping over to scurry across the floor while Kurt Russell looks on and deadpans, “You’ve got to be f***ing kidding me.”

Believe it or not, a remake of The Thing is slated for release in October of this year. 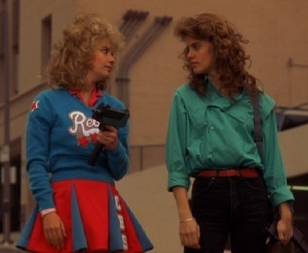 I’m in complete agreement with this one as it’s a personal favorite of mine.

A comet strikes Earth, killing 95% of all humans, turning 4% into zombies while the remaining healthy 1% head to the mall. With no special effects beyond the gross, oatmeal-y look to the zombies, Night of the Comet is pure 1980’s comfort food staring Days of Our Lives and college common room favorite Catherine Mary Stewart.

And standing right there beside Catherine as her plucky, cheerleader, younger sister is Kelli Marone wearing pretty much the same outfit she wore as a “Spirit Twin” in Fast Times at Ridgemont High.

With the original title of the film being Teenage Mutant Horror Comet Zombies, how much more 80’s can you possibly get? 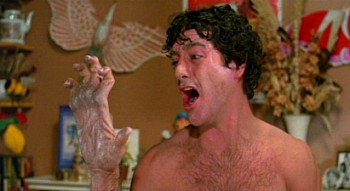 Hot on the heels of what was the eye-popping special effects of The Howling released in April of this same year, AWiL hit theaters in August and struck the perfect chord between humor and horror, while adding one of the best man-into-beast transformation scenes ever.

Described to me as the “perfect 80’s date movie,” it has a love story between Jenny Agutter (Logan’s Run) and doomed caninus horrilibus David Naughton for the girls, and the gross-out, back from the dead victims for the guys.

The heinous and hilarious combo will meet many more times in the 80’s in movies like Creepshow, Fright Night and Vamp but AWiL was the original; that is until last year when word leaked that John Landis had sold the remake rights to Dimension Films.

So what have we learned?

Scary movies from the 1980’s have transcended into such a cult following in the 2010’s that nearly every one of them is in some stage of being remade. And yet, nearly everyone I talked to while exploring this topic looked positively horrified at the very idea.

Not one person thought CGI or other nifty modern day effects would improve these “classics” one single bit; right down to a teenager who said he’d flat out refuse to see a remake of his “favorite movie ever,” The Thing. I wonder if he realizes the 1982 version is a remake of a 1951 version? You just can’t stop progress I guess.

And yes, a twenty-fifth anniversary edition of The Last Starfighter IS apparently a good idea so much so that…

Music composer Craig Safan, who scored the movie, let slip in an interview in 2009 that:

“There are plans for a sequel. There has been a script written, it’s been storyboarded. I think they’re just sort of waiting for the final go.”

Do you have a favorite 80’s horror flick? If so, did you see it in the theater originally or did you discover it later, which is a sneaky way of find out how old Black Gate readers really are. Post your comments here or keep your birthday to yourself and drop me a line at Sue@blackgate.com.

I have long suspected that I’m the only person on the planet who prefers the original The Thing (my favorite 50s SF movie) to the 80s remake.

I recently parted with my copy of The Last Starfighter. Good movie though. The first to use all CGI FX (with caveats). On the commentary track the director talks about their dedicated Cray X-MP and the number of FLOPS it could do. When last I watched it, I realized that these days a high-end PC video card can do the same.

Alex Rogan: So how many starfighters are left?
Grig: Including yourself?
Alex Rogan: Yes!
Grig: One!
Alex Rogan: ONE?
— The Last Starfighter

Catherine Mary Stewart has an official Facebook site Check it out http://www.facebook.com/catherinemarystewart

Jeff, true that a high-end video card could perhap produce similar graphics today, but who would you get to write the classic dialog Scott pointed out?

And Ryan, if you’re the one that linked this post to Catherine Mary Stewart’s Facebook page, you ROCK! (Editor) John O’Neill is going to feel like proud parent…

I have recently discovered some great and not very known at least for me slasher films, for instance House on sorority row and Prom night, great music, some humour, first 80’s hairs and clothes, good stories do you know them?

But of course! Prom Night with Jamie Lee Curtis as her 80’s “scream queen” finest, and Prom Night, cheesy, low-budget date movie at its finest. But you’re right about the music for sure.

[…] petition to get Catherine Mary Stewart on Dancing with the Stars and pick up a copy of the 25th Anniversary Edition of The Last Starfighter; it’s a ton of […]