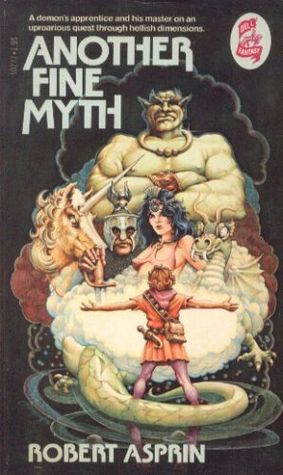 Reading Another Fine Myth, by Robert Asprin, was a peculiar experience. This is not because of the book itself, but because I’ve been following the comic by Phil Foglio, currently being posted as a webcomic. I think Foglio’s style made me expect a more frantic story than I got; if you read any of his comics, such as Girl Genius, you’ll know that the panels tend to be full to the point of bursting.

While I liked Another Fine Myth, I didn’t love it, and some of that may be because I was expecting a different sort of story. Mostly, though, I think it’s because the narrator never really took control of the events, making him more a sidekick than the protagonist I thought he was supposed to be.

He’s not enough of a fool to be the sort of protagonist who solves the problem through sheer luck and incompetence, but he doesn’t really get a shining moment either. He’s just there. I suspect this is a problem that goes away as the series progresses. My opinion of the series as a whole will probably be a bit different from my feelings about this one book.

Skeeve is a magician’s apprentice, but arguably not a very good one. He sees magic mainly as a potential thieves’ tool, a point of contention between him and his master. To show Skeeve that control is more important than power, the master decides to summon a “cold, vicious and bloodthirsty” demon by way of demonstration. Unfortunately, said master is assassinated just as the ritual is completed.

Fortunately for Skeeve’s continuing existence, the demon is not as vicious and deadly as advertised. His name is Aahz. 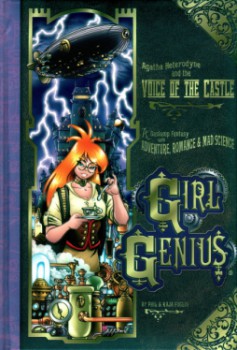 In many ways, Aahz is the protagonist of this story. He’s the one who deals with most of the threats, from the dedicated but not-too-bright demon hunter to the devious extradimensional trader. He may be currently without magic, but he’s an impressive con artist, and solves most of his problems by fooling, intimidating, or confusing opponents — sometimes all at once. He would be entirely at home in a criminal caper story.

For maximum incongruity, however, Another Fine Myth puts him in the middle of a traditional quest narrative. Skeeve and Aahz set out to find the mad magician who had Skeeve’s mentor killed, and since this is a humor story, a few classic fantasy tropes are going to get a little damaged.

For instance, Skeeve acquires a dragon, bonded exclusively to him — but it’s a baby, unlikely to grow up any time soon, and may not be all that bright. Also, instead of communicating telepathically, all it does is say “Gleep!”

The quotes at the beginnings of chapters highlight the incongruity of the whole thing; we have Inspector Clouseau talking about how to conduct an investigation, Icarus extolling the wonders of flight, and many others. Another Fine Myth is not full of jokes, and the writing itself is fairly prosaic; the fun is in the skewed situations. I didn’t find it laugh-out-loud funny, but humor is a personal thing and everyone’s mileage is likely to vary.

The worldbuilding in this story is a bit sparse at times. For instance, Skeeve was a would-be thief, but he didn’t seem tremendously familiar with the bad side of town, which made me wonder where he came from, why he’d left, and whether he’d ever been a successful thief. We don’t find out. There are demon-hunters in this world, but we don’t really learn who trains and supplies them, why demons are considered a dire enough problem to have professional hunters, etc. This may be partly because Another Fine Myth is poking fun at generic fantasy, but I expect it’s also something that will get resolved as the series goes on.

In short, I left this story with a sense of incompleteness. I think a lot of the things that I wanted to see are in later books.

I was happy to see a review of this but our opinion’s are very different, not that its a bad thing.

I love this book. I really enjoyed it. I’ve only read the first two book in the series but i’m about to start on the third over the christmas season. There were several times i laughed out loud in this book.In the second book you do see Skeeve take on more of a leaders role.

I don’t know what it is about this series i just enjoy it.I like all of the characters. also i’ve read about half of the first book in comic form. Now i read the book first and comic second, love them both but i get the same feel from them both. right down to how they both act. but you know what they say, ‘different strokes for different fokes.’
I thought it was a good and fair review even if my opinion is pretty different.

This is an interesting take on the first Myth book, Isabel. I read the thing for the first time about 25 years ago, and reread it a lot when I was younger. It’s been awhile since I last picked it up, though. I do think from what you’re saying here that you might like some of the later books a lot more; the series certainly is about the evolution of Skeeve as a character, and the growth of his ability to control the world around him.

I did find a lot more straight-up humour in the style of the book than you did (‘”Ow,” I commented’), but again, that could be something that picks up later — and you coming to it after reading the Foglio adaptation might have something to do with it, too. The comics added an awful lot to the book’s backstory, and created at least one major character subplot I can think of offhand (judging from the current page on Foglio’s website, you’re about to hit it). They were good comics, but much busier, in a positive way, than the original. It’s nice to hear that Foglio’s putting them up online; are the editions of the books with his illustrations still in print?

(Also, if memory serves, and a quick check of Wikipedia suggests it does, there were a few wholly original issues after the first book was adapted, by Aspirin and Jim Valentino, later of Image Comics fame. They sort of bridged the time between the first and second book.)

Oh, and speaking of backstory — in the eight or so books I read, Skeeve’s background was never given, but I always had the sense that he grew up in the country, and had no actual thieving experience. That is, he was studying with Garkin to become a thief, and so knew nothing of the bad side of town when this book started. In terms of worldbuilding … it may be relevant that the book was published in 1978, which I believe means it was pretty much in the first big wave of paperback fantasy, right around the time of the first Shannara book and the first Thomas Covenant book. So a lot of the current techniques for establishing a world maybe hadn’t been fully developed.

Asprin is one of my top 5 writers of all time, and Myth stands out as a brilliant series that unfortunately took a turn for the worse when Asprin divorced his wife deep in the series which leaches its way into the way some of the final books were written.

It’s very hard to review a book from 1978, and having read Foglio’s adaptation first any view of Another Fine Myth is fully contaminated. It’s like hearing a song, loving it, having it become part of you, and then having someone play you an original from Johnny Cash that you never knew existed and that your beloved version was a cover. Of course Johnny’s version is going to suck eggs in your mind because its forty years old and you got to hear the shiny new version first.

Ah well, before I fall into the ‘crazy old guy yelling for no reason mode’ I’ll simply say it was great to have someone bring this book to light. It is a true fantasy humor classic, and Terry Pratchett would agree.