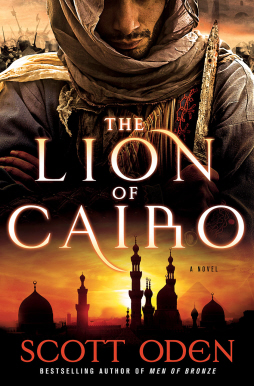 I think it’s totally cool that the dedication page of Scott Oden’s forthcoming novel The Lion of Cairo (U.S. publication date Dec. 7) pays homage to a sword and sorcery legend:

To Robert E. Howard
whose tales of swordplay and sorcery
gave inspiration to a kid from Alabama
and caused him to take up the pen
in his own time

After the Howard name-drop you pretty much know what you’re in for: Pulse-pounding sword play, leagues of warring assassins, political intrigue, a hint of evil sorcery, and the clash of armies on a grand stage. On all these elements Oden delivers.

Though inspired by the man from Cross Plains, The Lion of Cairo is no slavish imitation of Howard. The work — book one of the Emir of the Knife trilogy — shares just as much or more in common with Harold Lamb’s Swords from the East or Steven Pressfield’s historical fiction than REH’s tales of the Hyborian Age. Cairo’s main character, the assassin Assad, is more Pale Rider than muscular Cimmerian. He’s a dude you don’t want to tangle with: Deadly with a blade instead of a six-gun; not cocky but quietly confident in his abilities; single-minded of purpose; a stone-cold killer. Though he’s an assassin Oden successfully manages to portray him as sympathetic, a killer we can get behind. It’s a pretty nifty bit of characterization.

Assad is dispatched to Cairo by the shadowy master of his order to strengthen the position of the young Caliph of Cairo, Rashid Al-Hassan. Assad finds that the Caliph is a half-drugged puppet under the thumb of the Vizier Jalal, who desires the throne for himself. Frankish knights and knights Templar make appearances in this incendiary mix, taking various sides in the warring factions within the city. It’s a fun nest of back-door scheming and murderous plotting, if you like that sort of thing.

I’m not familiar with medieval Egypt nor the real order of the Assassins of Alamut to which Assad belongs so I’m not going to judge the historical accuracy of The Lion of Cairo. It feels real, which is enough for me. Oden spends considerable time introducing the reader to terminology unique to 12th century Egypt, words like mamelukes and rukhs and salawar (the latter is a wicked long knife/sword that you don’t want to be on the business end of). He’s a very descriptive writer, perhaps a bit more than I like, but his language helps bring ancient Cairo to life. Oden describes the swirling crowds, the ornate architecture, and the cool, demon-haunted sepulchres beneath the city with skill and flair.

What pushes The Lion of Cairo outside the boundaries of historic fiction is the presence of magic at the periphery. The wicked blade Assad wields — that salawar referenced above — has an evil sentience and hungers for blood. Not to the extent of Elric’s blade Stormbringer or Túrin Turambar’s blade Gurthang, perhaps, but enough to make men’s hands recoil from its very touch. Assad seems to be able to wield it without harm or revulsion, implying that there’s a lot more to him than we the reader know. Throughout the book Assad is plagued by nightmarish flashbacks from a red butchery in the city of Ascalon, looted and pillaged by Nazarenes when he was a young soldier. As a man in his late 30’s/early 40’s he seems poised on a ledge between redemption and nihilism. I suspect we’ll learn more about him over the next two books. 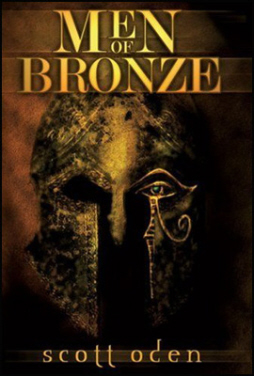 Oden also does a fine job creating characters you love to hate. I very much enjoyed his portrayal of The Heretic, Assad’s counterpart and a bad-ass killer himself. We’re rewarded with a fine confrontation between the two assassins. As you may suspect there are no clear lines drawn between good and evil and everyone is covered with the grime of history, though characters like Assad are easy to get behind. But don’t get too comfortable: Oden is not afraid to pull punches and The Lion of Cairo surprises with its high bodycount.

That reminds me: If you enjoy a good battle-scene, Oden’s your man. The Lion of Cairo features not only memorable one-on-one duels, but a stirring, bloody, large-scale clash of Nazarene and Moslem outside the walls of the city. Combat is one of the book’s strengths. Again, if you like that sort of thing.

I haven’t read any of Oden’s other works but The Lion of Cairo whetted my appetite for his debut novel Men of Bronze, which takes place back in Egypt albeit in 526 B.C.. I’m interested to see how Oden handles material from an even more distant historic period: If the skill with which he crafted The Lion of Cairo is any indication, very well would be my best guess.

Can Not Wait to read this.
Even when the swords are not flashing and quenching, Oden’s style has the power to pull the reader headlong into his world. And Lion of Cairo moves beyond historical swashbuckler into the realm of sword & sorcery?
I’ll buy the first copy of this book that I see.

I’m gonna have to check this book out too.

Sounds very cool & appealing to me too!

Geesh! Black Gate not only reviews some great books, it has some pretty darn good reviewers too! Thanks Brian.

Thanks for the excellent review, Brian! So very glad you enjoyed the book. Hopefully, a great many people will feel the same as you 🙂

Thanks for the kind words about the review, guys. And Scott, great job on the book. You should be proud.