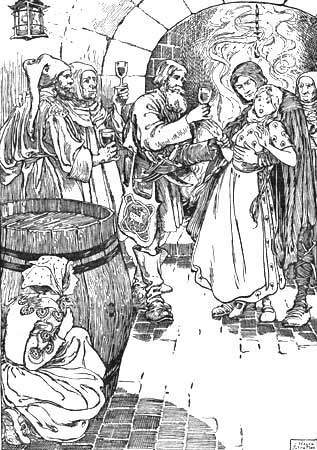 (I passed the 50,000-word mark in National Novel Writing Month yesterday, at Day 14. Last year I achieved this at Day 13—I must be getting slow.)

I have started to view Frederick Faust as something of my writing mentor. He wasn’t a public figure, instead disguised behind “Max Brand” and his many other pseudonyms, but his excellent storytelling skill is a good teacher all on its own. However, in his letters he left behind some excellent advice about how he developed his ideas. Considering his productivity, which shames about every author in history through its sheer volume, he must have got his ideas fast.

It is easy to call Frederick Faust and other writers with enormous bibliographies to their credit (Andre Norton comes to mind immediately within speculative fiction) as “natural storytellers.” But I wonder how much that takes away from their efforts. Faust’s own notes about his writing indicate a man always on the search for “story,” and not simply plunking down in front of the typewriter and trusting to luck. Early in his career, Faust was constantly worried that each idea he had would be the last one he would ever find—and I think most writers would admit to a similar fear. But Faust discovered, “You spot stories in the air, flying out of conversations, out of books.”

Here’s a remarkable piece of advice I discovered in one of Faust’s letters, which offers an interesting writing exercise: “When you read a story, pause halfway through; finish the story in detail in your imagination; write it down in brief notes. Then read the story through to the end. Often you find that you have a totally new final half of a story. Fit in a new beginning and there you are.”

That so simple it’s beautiful. I’ve tried it a number of times, usually on modern works, and always come up with a sketch of something completely new. So far, I’ve never used one of these outlines to complete a full story, but a few other ideas have come out of this brainstorming.

I’ll illustrate how Faust’s “Saw-the-Story-in-Half” exercise works when put in action. For this trick, I’ll bypass anything modern and go to something aged, short, and archetypal: one of the fairy tales collected by J. L. C. and W. C. Grimm. Although many of Grimm’s fairy tales are parts of popular culture, there are so many of them that it is easy to locate a story with which I’m unfamiliar and use it as the base.

I open up my unabridged volume of Grimm’s Fairy Tales (which I purchased in Salzburg and, despite the claim on the front, most certainly is abridged) and pick out an unfamiliar title: “The Robber Bridegroom.” Evocative name. It is #40 in the Grimms’ numbering, and 955 in the Aarne-Thompson classification system, if that is of interest to you. The piece is a bit under four pages long in my edition, so I’ll read two pages and stop to summarize the plot at that point.

The summary at the half:

A miller searching for a match for his lovely daughter betroths her to a seemingly prosperous young man. However, the future bride feels nothing for her bridegroom except a strange chill. The bridegroom asks her why she has not come to visit him, as a proper bride should. When she explains that it is because she does not know where his house is, he tells her it lies deep in the woods, and she should come to it this Sunday, when he has company. All she has to do to find the house is follow a trail of ashes through the woods. The girl goes, but out of suspicion leaves a trail of dried peas at the side of road so she might find her may back. She comes to the house, and a bird in the trees sings a poem warning her not to enter, “For evil things here do betide.” The girl enters the house anyway, and finds all the rooms empty. She goes down into the cellar and finds an old woman sitting there.

Okay, excellent place to halt . . . right as I am getting a Psycho vibe from this tale. The sensation that Anthony Perkins will come dashing downstairs in a wig and dress, wielding a knife, bringing a mad Bernard Herrmann all-string orchestra with him, is a bit much. Gotta purge that from my head or I will end up summarizing that.

Now, what happens next? Per Magister Faust, I have to make up my own version. Grimm One and Grimm Two have given some shivery foreshadowing, and the title also provides me some ideas. But why the emptiness of the house? What sort of evil lives here, according to the bird? What is going on with the old woman in basement? How will the trail of peas come in handy, and will the ash trail vanish?

Given knowledge of how Grimm’s fairy tales often go, I could probably hatch a decent simulacrum conclusion of the actual thing. However, I want my own story, and I’m going to add a new beginning to his afterwards anyway. So I’ll sketch a conclusion divorced from “Grimm Thoughts,” as well as from the title.

The old woman tells the girl that she is the ‘great aunt’ of the bridegroom, and he has lured many woman to the house and burned them in the oven. Their ashes are what make the trail. However, the great aunt has decided to deceive her murderous nephew and save the next girl’s life. She told him she had spotted a hart on the edge of the forest, one he has tried to catch for years, and he went after it without a thought. The girl runs to escape, and follows the trail of peas. However, she runs into a bear that has eaten some of the peas. The bear rears to maul her, but an arrow suddenly kills it. The bridegroom comes onto the path, having turned back from his hunt. The girl flees from him, and her feet kick up the ashes. The cloud of ash chokes the hunter, and he dies on the path. The same bird that sang the song lands on his corpse, and turns into the great aunt. She is not the great aunt at all, but the spirit of the dead girls seeking revenge, brought to life from the same dark spirit in the walls of the house that drove the groom to murder. The girl tries to find her way home, but without the trail of peas, she ends up back at the house. She moves inside, and begins to think of finding a husband . . . and then another . . . and another . . . the oven must feed.

All right, maybe not the finest piece of outlining I’ve ever done, but for the moment I feel fine with it. Now, I have to remove the first part. Ignore all that happened before. Wed on a new opening, with character names, and come up with something new. This will also force changes in the second half.

Amelinda lives in the village of Roettig with her elderly grandmother Karolina. Her best friend Melanie is soon to be married to a handsome young man, but on the eve of the marriage, Melanie vanishes into the woods. The village assumes she has eloped with a boy from another village. Amelinda goes to console Melanie’s abandoned bridegroom. They soon find themselves falling in love, but he will not let Amelinda visit him. She finally begs that he be open with her and show her his home, because that is where they will both live. He gives in, but he says there are consequences he cannot control. He instructs her to follow a path of ash to the house that Sunday night. Amleinda is cautious enough to leave a trail of peas along the way. She comes to the house, and hears cries in the bushes that sound like Melanie’s voice. She hunts for the voice, afraid now to enter the house. But the voice leads her to a trap door, and she falls down into the basement of the house, where an old woman sits . . .

This now necessitates altering the second half, with Melanie’s spirit making a re-appearance, and the idea that the bridegroom is under the direct control of a malevolent force in the house that drives him to murder (and seizes our heroine as well). There’s more dramatic underpinning to work out about the bridegroom character, and what the real evil is, etc. And the whole “trail of peas” might become something else.

Nonetheless, there’s the broad basis for an idea here. Flip a few more switches—say, how could this be set in the modern day? or in the American West? or have a weird-steampunk angle? or what would happen if the gender roles were reversed?—and I could get even more concepts for a fresh story in motion. The whole point, after all, is find new story ideas and get the writing engine chugging.

And what did actually happen at the end of “The Robber Bridegroom”? No point in keeping you in suspense. The old woman reveals that the house is a place of cutthroats, who also practice cannibalism, and they will boil and eat the girl that night. The old woman hides her as they bring in another girl, whom they cut and boil (yes, everything you’ve heard about original fairy tales being unsuited for children is 100% true). The old woman puts a sleeping powder in the cutthroats’ food, and then helps the girl escape and follow the path of the peas that have sprouted after the ash trail blew away. At her wedding feast, the girl tells the whole story, and holds out the chopped-off finger of the other girl as evidence. The bridegroom is caught and executed. (You can read the entire story here, including source notes.)

That is a pretty grisly tale, and I’ll admit a very good one. I did not see the cannibalism coming, that’s for certain. But looking on my experiment, I’m content with the different direction, and completely different story that emerged from the trunks once I sawed it in half.

So thanks to Frederick Faust for the tip. I wonder how many of his stories he wrote using this method?

Addendum: Researching the original story turns up a few works based on it. English collector Jacobs did his own version with the villain called “Mr. Fox” (and he’s less than fantastic). Eudora Welty wrote a 1944 novella, The Robber Bridegroom, and set it in 19th-century Mississippi; it later became a 1970s stage musical. Both Neil Gaiman and Margaret Atwood have written stories based on it (Atwood did the gender-switch thing), both taking flight from the original story. I guess my ignorance of this story is telling. I’m good on the Greek myths, not so much with medieval German boogeyman fables.

Congratulations on the NaNoWriMo win! I’ve been bogged down myself; I’m only approaching 30,000, but have been busy lately. Today and tomorrow are my catch-up days.

The saw-the-story-in-half trick is great, and I like what you did with the Grimm piece. What’s interesting to me in particular is how it still has a strong folktale sense to it, while also having some more modern twists (“the oven must feed” is nifty).