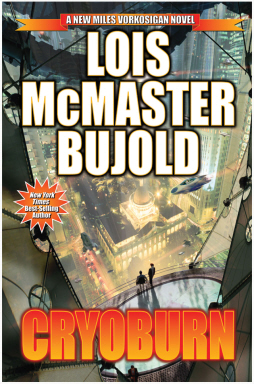 Cryoburn shows signs of being the last Vorkosigan novel. At the very least, it marks the end of a very long multi-novel arc in the series. For that reason, among others, it’s not a good place for newcomers to sample the series. For the same reason, longtime readers of the Vorkosigan stories will want to read this book, even if it is less than Bujold’s best work. (It’s still better than most sf writers on their best day.)

Although there’s no reason why Bujold couldn’t write a sequel to Cryoburn, there is some material at the end of the book that harks back to the opening entry in the series, Shards of Honor, and in it we can also hear some darkly deliberate echoes of the first Miles novel, The Warrior’s Apprentice. It’s as if LMB is marking the end of the series with ring composition. If my description seems rather vague, that’s because I’m sparing the spoiler, here. All this stuff is a sort of codicil to the novel, anyway, having nothing to do with the main story– which makes it look that much more like a deliberate signal. (I hope I’m wrong about this.)

The story proper finds Miles adrift on Kibou-daini (a.k.a. New Hope II), a world whose culture is dominated by corporations holding patrons in cryonic sleep. While the sleepers sleep, the corporations control their assets–and their votes, so that the government becomes a plutocracy ruled by a few giant “corps” (as they are brilliantly called).

It’s an intriguing setup and LMB uses it to tell two different stories: an attempt by the corps to stage a quiet invasion of Komarr, and an internal reform movement that threatens the power of the corps on their frosty home turf.

Unfortunately the Komarr subplot, though plausible, is too administrative in nature to make for a dramatic story. The internal-unrest plotline is more interesting, but Miles doesn’t really have a place in it, except as a catalyst. Most of that will take place in his absence. A torrent of explanations towards the end of the book indicates something of how the story will play out, but that’s different from getting the story itself.

The world itself also seems lightly pencilled in, awaiting more details to bring it to life. Longtime readers of Bujold have vivid, almost personal memories of Sergyar, Komarr, Barrayar, Bujold’s future Earth, etc. But they may not have equally vivid memories of Kibou-daini. That’s too bad, as the setting seems pretty promising on paper, as it were.

On the plus side, the loosely-fitting double-knit plot gives Miles the room to be very Milesian. He gets kidnapped, freaks out due to the old drug-allergy, hallucinates frantically, falls in with a sort-of orphan named Jin who keeps a personal menagerie on the roof of a rebel cryofacility. All that in or before chapter 1. Soon enough Miles is stealing cryochambers, conducting illicit resurrections, accepting bribes, and in general getting his forward momentum lodged in everyone’s grill.

Jin is one of the best characters in the book, and the character work in general in this book really shines. Bujold never forgets that each of these people is at the center of their own story, and they get to have relationships with each other that have nothing to do with the hero. The exchange between Jin and Armsman Roic after Roic shoots Jin with a stunner (for sufficient reason) is awesome–it’s the kind of conversation that can only occur because these people refuse to believe they are minor characters in a story which is really about someone else. Which is one reason why they’re not just that.

And there are some fun Easter eggs lurking in the text. There’s an out-of-nowhere Tolkien reference, for instance (compare Nefertiti’s alarm-cry to the alarm of Buckland in Fellowship of the Ring). And I’m pretty sure Mark Vorkosigan’s “fire sale” bargain on some real estate was meant to summon up the memory of this Roman fat cat. No doubt there are other bits I missed.

In short, this is a must-read for Bujold fans, which they already knew. And Baen, who are very forward-thinking about etext, include a CD with with the hardback that contains DRM-free e-versions of nearly the whole Vorkosigan saga (and some other Bujoldiana) in multiple formats. So even newcomers to the Vorkosiverse might be interested in the hardcover if only for the CD: they could start at the beginning of the saga and plow onward.

I don’t know if you guys will be interested, but this book represented a personal bridge for me in terms of format. I bought the hardback–naturally: Bujold is one of the few writers whose books are automatically on my HAVE TO HAVE IT RIGHT NOW LIST. I read a chapter or two in the hardcopy, becoming increasingly restless. Finally I loaded up the text on my iPhone and finished reading that way. And I really think that’s going to be my preferred method of reading from now on. I’m not (like Doctor Faustus in his last scene) ready to burn my books. But increasingly I feel like they’re an older and more awkward medium, like the vinyl records I rarely listen to, though I can’t bear to part with them.

James Enge is the World Fantasy Award nominated author of Blood of Ambrose, This Crooked Way, the recently released The Wolf Age, and some other stuff, much of it published in Black Gate. Like the rest of the universal world, he’s on Twitter and Facebook.

Yup. I had the distinct torture of pre-ordering that book new for a customer at our used bookstore and then watching them pick it up and carry it away from me.

Someday, it will be mine. Someday soon. Dum spiro spero, hmn?