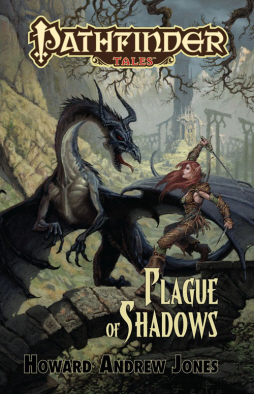 In addition to his upcoming Dabir & Asim novel The Desert of Souls, due in hardcover February 2011 from Thomas Dunne Books, Howard’s second novel Pathfinder Tales: Plague of Shadows will appear from Paizo in early 2011.

Pathfinder Tales novels are standalone novels set in the world of Golarion, home of the succesful Pathfinder role playing game.  The first two volumes are Prince of Wolves by Dave Gross (August 2010) and Winter Witch by Elaine Cunningham (November).

The race is on to free Lord Stelan from the grip of a wasting curse, and only his old elven mercenary companion Elyana has the wisdom — and swordcraft — to solve the mystery of his tormentor and free her old friend before three days have passed and the illness takes its course. When the villain turns out to be another of their former companions, the elf sets out with a team of adventurers across the Revolution-wracked nation of Galt and the treacherous Five Kings Mountains to discover the key to Stelan’s salvation in a lost valley warped by weird magical energies and inhabited by terrible nightmare beasts. From Black Gate magazine’s fiction editor Howard Andrew Jones comes a fantastic new adventure of swords and sorcery, set in the award-winning world of the Pathfinder Roleplaying Game.

You can pre-order copies directly from Piazo, either individually or as part of their Pathfinder Tales subscription.