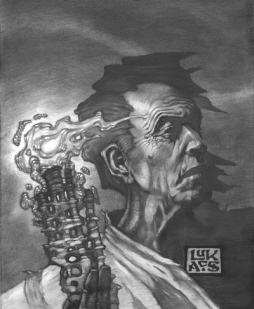 The second novella in Black Gate 14 was “Destroyer” by James Enge, the sixth of his extremely popular Morlock stories to appear in our pages. Here’s what Tangent Online had to say:

Thend, his mother, Morlock and the rest of the family are fleeing some calamity from Sarkunden in the south towards a high pass in the northwest — attempting not to be seen by the insect-like Khroi and the Khroi’s enemies, the giant spiders, by staying between the territories of the two species. Thend and Morlock come upon a Khroi, trussed up and hanging from a tree — awaiting his eventual fate as a meal for the spiders — and because Thend is young and passionate about doing the right thing, [he] frees the Khroi, which will have consequences later… I’m going to search out Enge’s other stories about Morlock.

Part of a dark fantasy series which has by now accumulated a massive weight of backstory. Fortunately, most of it has been left behind as the wizard Morlock and his companions continue their journey across a range of mountains infested with spiderfolk, dragons and the insectile warrior Khroi. It is the Khroi who capture the party, with the intention of laying their eggs in the human bodies. But their primary purpose has been the elimination of Morlock, whom they call the Destroyer; their seers have foretold that he will be the destruction of their horde, despite Morlock insisting that he has no such intention. Intention, however, isn’t everything.

It turns out that the Khroi have been told that Morlock would cause their destruction, which is why they must destroy him first. This causes a fascinating debate between the Khroi leader and Morlock on dreams, foretelling, and predestination, echoed by conversations among the companions. Enge builds an imaginative world with intriguing details, but never loses sight of character development. Thend, the boy who is struggling to understand his own visions, is an appealing contrast to the mysterious Morlock who talks to dragons.

“Destroyer” appears in Black Gate 14. You can read an excerpt here, and the complete Black Gate 14 Sneak Peek is available here. You can find additional reviews of the entire issue here.